Bingo! Or Tag, You're Hurt. 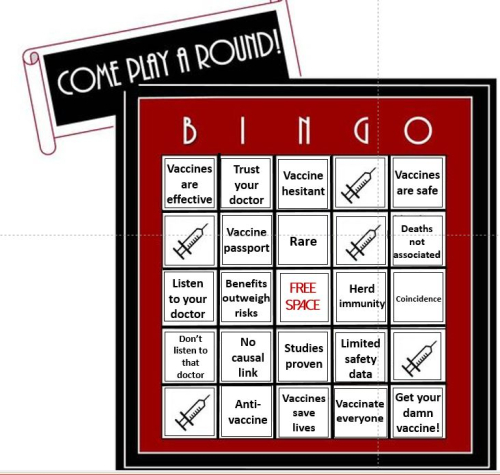 This old game board from 2016 was autism specific, but it can be used with adjustments for the shenanigans going on today.

It's over an hour drive to get to some of Ronan's specialty appointments, so I have plenty of time to think about the questions I have for the providers we're scheduled to see.  I really like one of the doctors we're working with, so I stay very hopeful as I plan for visits with him.  With my mind more at ease for these particular appointments, on Thursday, as we made our way to the clinic, I drove with the radio on.  Other visits have me driving in silence as I go over important questions and treatment options I'd like to discuss with my son's doctors.  This time, I turned the radio on as soon as we left our driveway.

After getting a good dose of some 80s music and some alt rock, I changed the station and started to listen to the BBC News Channel.  One of the top stories was about efforts to restart administering the Oxford vaccine. Halted because of reported blood clots post vaccination, several countries in the European Union stopped the roll out.  As expected, the vaccine representatives and those who’ll benefit from the products skirted around or denied that the products caused major problems, "The company says there is no evidence of an increased risk of clotting due to the vaccine."

I wish I'd thought to count how many times the announcer and the vaccine representatives interviewed for the story said that the AstraZeneca vaccine was safe. I wish I'd continued to count how many times they fell over themselves in their reporting.  Continuously reassuring radio listeners that the vaccine program, despite the significant negative responses people already had, was ready to be resumed as early as the next day.  It was literally too many times to count.

After a successful doctor’s appointment, I got us down the road a little bit before turning the radio on again.  The BBC had the AstraZeneca story on a continuous loop.  All the way home, I flipped from the 80s music station to the news stations.  I wasn’t surprised at how much airtime the COVID19 vaccines were still getting.  Several times over the last two week I’d also heard DJs on other stations boasting that they’d gotten it themselves.  I wish I’d had a BINGO card with me, tweaked a bit to highlight the absurdities of the current, intensely global COVID19 vaccine push.  I couldn’t escape the games vaccine pushers were playing, no matter how hard I tried.  Giving it one more go on the news station, I put the BBC back on.  It was the same exact story with the same exact reassurances all over again.  Vaccines are safe and effective.

Even though they’re not.

Cathy Jameson is a Contributing Editor and our favorite Sunday school teacher. XOX

Gates the only philanthropist that gets richer? Paid Pharma Journo Shills- Pharma Needs You!
Lord Sumpton to Judge the next vaccine case please! Such a shame he has that honest opinion, but we all know he would have no chance of proving anything against vaccines.

A bit over a year ago, a local station was playing a "get your FLU shot" PSA 5 to 7 times an hour, it was just a bit obnoxious after a while. I would guess if they have no Real ad sold for the spot, they can be paid by PHARMA for running the FLU shot PSA.

We have now been in an endless "vaccine advertising loop" since the beginning of the FLU shots ads in August of 2019, vaccine season has become a year round event and will remain so until the political ads start back up for the 2022 elections.

The political ads are paid for by PHARMA.

I fear Lord Sumption is actually a bit naive about the British government’s vaccine narrative despite his stalwart opposition to lockdown.

Vaccines are unsafe or safe, just as families are happy or unhappy.

"All happy families are alike, but
every unhappy family is unhappy
in its own way."

Don't know if there are any safe vaccines.

But unsafe vaccines are, each of them, unsafe in their own way. Cannot be lumped together.

Your right Grace BBC radio is free one of the perks the BBC gives out, well, well! I forgot to mention the Spectator is doing a nice bit of reporting just now. Below Judge Sumption is anti vaccine and anti lockdown going by what hes saying.The Spectator seems to be a bit more honest than the BBC reporting-just now woudnt mind paying for the Spectator news.No BBC TV in our house for over 14 years now and we dont miss it.

Angus,
You're right about the TV license but you don't need one to listen to the BBC on the radio (just in case Cathy was worrying!). There is even more reason now to ditch the license, throw out the TV, and start listening to the radio. However, I have been dismayed to hear vaccine propaganda even on my safe haven of Radio 3 (classical music). It's all BBC of course, and the announcers have been given their orders!

The UK (and USA increasingly) is an authoritarian vaccine pushing government.

Both of these Anglo Saxon nations will collapse when they are forced to pay literal trillions of dollars in autism/SEND costs.

It’s not sustainable, they’re sabotaging their own populations.

Th BBC ignores or downplays the decimation of British youth via vaccines.

Its a criminal offence to watch TV and not have a BBC license imagine the poor folk of the UK pay to watch and listen to these lies,and they believe them if played enough times.Hit job pharma pjhantasy philm company just ask Dr Wakefield.

And if the look doesnt work and you need more back up just get big brother-but that never works either.

WHO shuts down EU over AstraZeneca vaccine scaremongering - use must continue
THE World Health Organisation has doubled down on its support for AstraZeneca's coronavirus vaccine after EU nations suspended its use over unsubstantiated health scares.
WHO Europe director Hans Kluge insisted the benefits of the Oxford jab outweighs the risk of side-effects. As many as 17 EU countries have halted their rollout of the immunisation over concerns that it has caused blood clots in people who have received it. Dr Kluge said: “Benefits of the AstraZeneca vaccine outweigh any risks and its use should continue to save lives.”

Good Morning to all! So sad. It is called pharma propaganda. If the TV and Radio people say this dangerous Vaccine is safe, it must be. Over and over again we hear this. Some on this site openly post that the benefits outweighs the risk and they worry that some healthy people are dying after getting the Covid 19 vaccine. They worry? Give us a break. So again if a lie is repeated over and over by Pharma Radio and TV it must be the truth. Sadly, we of the vaccine injured community know better. We trusted and got burned. Never again for me and my family. Blessings to all!

As the man once said … "REPEAT A LIE OVER AND OVER AGAIN UNTIL IT IS BELIEVED BY ALL WHO HEAR IT".