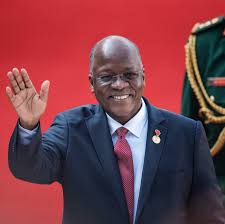 Update 3/18: President Magufuli has died at age 61. Reports indicate a heart condition as cause of death.

Sometimes we share news from far away.  This is an interesting story from Africa. ABC News and other outlets have reported on Tanzanian President John Magufuli having been out of the spotlight since late February.  Tanzania cops arrest man for reporting that president is ill Tanzanian police have arrested a man for circulating posts suggesting that President John Magufuli is in ill health

Magufuli is one of Africa’s most prominent COVID-19 skeptics. Last year he said the disease had been eradicated from Tanzania by three days of national prayer. He cast doubt on tests to determine COVID-19 discouraged Tanzanians from wearing masks, keeping a distance from others, and the use of vaccines to combat the disease. Magufuli’s absence is unusual as he is known for frequent public speeches and appearances on state television several times a week.

Below is another POV on the missing leader:

John Magufuli, President of Tanzania, has disappeared. He’s not been seen in public for several weeks, and speculation is building as to where he might be.

The opposition has, at various times, accused the President of being hospitalised with “Covid19”, either in Kenya or India, although there remains no evidence this is the case.

To add some context, John Magufuli is one of the “Covid denier” heads of state from Africa.

He famously had his office submit five unlabelled samples for testing – goat, motor oil, papaya, quail and jackfruit – and when four came back positive and one “inconclusive”, he banned the testing kits and called for an investigation into their origin and manufacture.

In the past, he has also questioned the safety and efficacy of the supposed “covid vaccines”, and has not permitted their use in Tanzania.

In the Western press, Magufuli has been portrayed as “anti-science” and “populist”, but it is not fair to suggest that the health of the people of Tanzania is a low priority for the President. In fact it’s quite the opposite.

After winning his first election in 2015, he slashed government salaries (including his own) in order to increase funding for hospitals and buying AIDs medication. In 2015 he cancelled the Independence Day celebrations and used the money to launch an anti-Cholera campaign. Healthcare has been one of his administration’s top priorities, and Tanzanian life expectancy has increased every year while he has been in office.

The negative coverage of President Magufuli is a very recent phenomenon. Early in his Presidency he even received glowing write-ups from the Western press and Soros-backed think tanks, praising his reforms and calling him an “example” to other African nations.  All that changed when he spoke out about Covid being a hoax. Read more here.

"...this is because I have sacrificed my life for the sake of poor Tanzanians."

President Magufuli is a Christian martyr. He has his heavenly reward. Let us pray for the Church in Tanzania.

To the previous commenter, Magufuli's testing of goat, papaya and motor oil was indeed famous. It generated numerous internet memes mongst the anti-lockdown community. His death is both tragic and highly suspcious.

The case for a coup d'etat is made here:

"Populist President John Magufuli on February 21 urged citizens of the East African country to take precautions and even wear face masks—but only locally made ones. Over the course of the pandemic he has expressed wariness about foreign-made goods, including COVID-19 vaccines.

Last month, the president called on his 60 million citizens for three days of prayer to defeat unnamed “respiratory diseases” amid warnings that the country is seeing a deadly resurgence in infections.

“Maybe we have wronged God somewhere,” Magufuli told mourners at a funeral for his chief secretary, John Kijazi, on February 19. “Let us all repent.” "
"Health Minister Dorothy Gwajima told a press conference in the capital, Dodoma, on February 1 that “the ministry has no plans to receive vaccines for COVID-19.” Any vaccines must receive ministry approval."
https://blackchristiannews.com/2021/03/tanzanias-president-says-prayer-will-defeat-the-coronavirus-as-cases-continue-to-climb/

"Last year he said the disease had been eradicated from Tanzania by three days of national prayer. "

Are your sins forgiven?

"And now, I beseech thee, let the power of my Lord be great, according as thou hast spoken, saying,
18 The LORD is longsuffering, and of great mercy, forgiving iniquity and transgression..." Num. 14:17

"5When Jesus saw their faith, he said unto the sick of the palsy, Son, thy sins be forgiven thee.

6But there were certain of the scribes sitting there, and reasoning in their hearts,

7Why doth this man thus speak blasphemies? who can forgive sins but God only?

8And immediately when Jesus perceived in his spirit that they so reasoned within themselves, he said unto them, Why reason ye these things in your hearts?

9Whether is it easier to say to the sick of the palsy, Thy sins be forgiven thee; or to say, Arise, and take up thy bed, and walk?

10But that ye may know that the Son of man hath power on earth to forgive sins, (he saith to the sick of the palsy,)

11I say unto thee, Arise, and take up thy bed, and go thy way into thine house.

12And immediately he arose, took up the bed, and went forth before them all; insomuch that they were all amazed, and glorified God, saying, We never saw it on this fashion." Mark 2:1-12

Well that is a shame he has died. That is what "Age of Autism" reported.
Always dependable.

We don’t know a lot that only time will tell. Pfizer reports that its product IS effective against the new variants (but maybe not when they will have changed a lot). Moderna says it can easily tweak its formula to cover the variants, but would need several months’ lead time.

The Pfizer product has already saved many lives and interrupted the chain of transmission. I think that’s a good thing. The idea is that if everyone is soon immune to the original and close variants, that cuts off the spread of all the variants too.

I am obviously not an expert, but I think if there were a variant unable to be prevented with the original vaccine, I think the person could get another vaccine designed to cover the variants. Most children get a large number of different vaccines and are usually protected against all the diseases. I don’t think one vaccine prevents the effect of subsequent vaccines. Of course there are dangers inherent in getting any vaccine, dangers which increase the more vaccines are given. But in this particular case the dangers of the disease are worth considering.

I don’t think it would have been responsible to hold off on introducing any vaccine for a year or more while extensive testing was done. Many thousands of lives would have been lost. Every person must evaluate the risks in his own case.

It is about 5:30 p.m. in the Rocky Mountain Time zone. Just been seeing news reports that Magufuli has died.

The President of Tanzania has died, according to the WSJ:

It seems like Astrazeneca/Oxford is being linked to more immediate problems/deaths as recorded on the yellow cards than Pfizer?

Of course the real test of survival is what happens in about a year from now when new variants appear that don't have the same spike protein. Will the vaccine induced response override the natural immune adjustments to changes, leaving people making useless antibodies, as programmed by the vaccine, that can't work against the new mutations? I don't know if this would happen or not, but it seems like it would have been good to have a definitive answer showing safety, and the ability of the body to override the vaccine programming if faced with with different types of COVID mutations, before injecting millions with these newly designed mRNA vaccines.

I couldn’t cut and paste the passage. Toward the end Iwasaki says During the SARS 1 outbreak... she says ADE reactions were seen then, but not now in connection with the Covid vaccines.

All but the mRNA products are adjuvanted with aluminum, so I probably wouldn’t get them. Vaccine researcher Akiko Iwasaki said that while ADE had been a problem with trialed SARS-1 and MERS vaccines, it hadn’t been with Pfizer or Moderna vaccines. I’ll get a link. Still not safe, still a powerful jolt to the immune system, I’m still reading about it every day. Especially information on many reports that it improves the condition of many with long Covid. The mRNA products are 95% effective in preventing Covid. Sputnik 91% effective. Astra Zeneca much lower, except that effectiveness continues to rise for a couple of months. JnJ same, after a couple of months extremely effective. All of them seem to be 100% effective in preventing severe cases and deaths. I’m sure AZ will be reinstated by next week. Europe really doesn’t have many choices and Italy has such a resurgence that it’s gone back into full lockdown. Brazil is also in a truly desperate situation, largely because of the variants. Ultimately each individual needs to make the choice thinking about individual risk factors. I am no longer as certain as I was that AZ caused the blood clots. Thirty some-odd reported cases out of many millions of doses given. Even if there was a causal connection, those afraid of a clotting event might want to consider taking anticoagulatories like aspirin. I’ll look for the link.

Its all about A.D.E I fear, and only Moderna & Pfizer are mRNA vaccines.
So does this mean the Oxford_AZ is actually the better of the 3 abominations ?
No idea about J&J's offering. & obviously its a total boycott to ALL from me.

Thank God for any good leader, in any country that has his people's interest at heart.

Do you want the silver or the lead ?

This is a common phrase in Columbia issued by the drug cartel. Either join the cartel and take their silver or they shoot you in the streets, after they shoot your family in front of you.

I hope Tanzania's President is okay. Albert Bourles, CEO of Pfizer and his buddy, Bill Gates are handing out a lot of silver and lead these days.

"He famously had his office submit five unlabelled samples for testing – goat, motor oil, papaya, quail and jackfruit – and when four came back positive and one “inconclusive”, he banned the testing kits and called for an investigation into their origin and manufacture."

FAMOUSLY??? This is the first I ever heard of Mangufuli's FAMOUSLY publicized test of the "kits" being used to DRIVE the numbers of COVID in one direction only .. UP. The greatest danger to anyone in power is to speak the TRUTH in an age where TRUTH is not allowed.

Hope the man is well … otherwise he should be a warning for all of us.