Will The Real Auntie Vackser Please Stand Up? 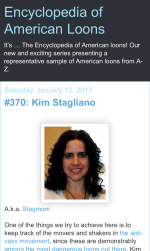 Hey! WE ARE THE KEEPERS OF THE CHEEEESE!  (Apologies to Ren and Stimpy and readers too young to get it.) If you've been around as long as I have, and many of our readers have, you're familiar with the Encyclopedia of American Loons. I'm no Mother Teresa or Stagliano, but I am still a proud American Loon. This was a site cataloguing "anti-vaxxers" like birds, from the ODD-uban Society of folks who used to troll parents of vaccine injured children and had meaning in their lives via their wee blogs that now collect dust like T ball trophies in Mom's paneled basement.

The news story that has circulated about the "anti-vaxxers" who interrupted the LA Dodger Stadium Co-vax administration event has me riled up. First off, I don't trust a word the LA Times writes about anything other than "the ink we use is black."  They have proven over and over again to be solidly anti-anti-vax, pro-Kaiser, pro-pharma and anything but concerned about our children. I don't even recognize California any longer, a state I used to think of as magical and the ne plus ultra of American success.

One commenter at CHD claimed to be responsible for the LA event. His name is Jason Lefkowitz. He was quick to take responsibility. 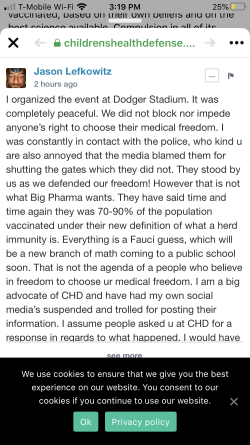 It seems Mr. Lefkowitz is a President Trump MAGA supporter. Not a problem here. We’re Switzerland. But a quick ask around town turned up nothing 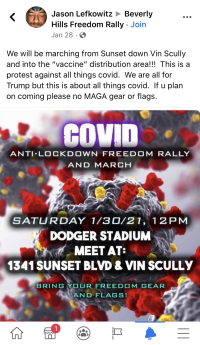 about his previous involvement in say SB277, the biggest CA vaccine legislation since the NVICP. His Facebook page shows no kids. (Of course they could just be ugly.) I’m kidding.  Where are his bona fides in the vax choice community? I have nothing against him. I'm sure he is pissed off to be described so badly by the LA Times (welcome to our world, Jason.) 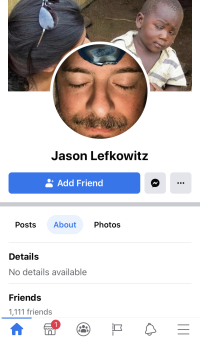 If you read his description of the event, he asked participants to leave their red MAGA hats at home. (What? no red hats? Well, there go the Auntie Vackers of a certain age.)  One can not help but wonder if perhaps the event, and the ensuing kerfuffle was not about protecting anyone from vaccine injury. But we took the heat. And this makes us more “dangerous” to society. it was a protest against "all things Covid." Whatever that means.

But the media took the chance to slam our work, our worries, our science. Like Kennedy, I have no place in my heart or head for disruptive violence. And I can be quite disruptive.  I'm well trained. I've always said that I am pro-choice. You can call me an American Loon too if you want.

I looked up Mr. OutofLeftfifeldkowitz on Facebook after reading his comment on the CHD site. His page is sparsely populated with no details about him. He has 1,111 (yes, the angel number) of friends and not one is a mutual with me. We American Loons are a sociable group, we travel in packs, gaggles, pods. It's odd we would not have one mutual friend.

Will the real Auntie Vacker please stand up? Or do we have to cry Uncle?

This event is a real litmus test. The video is the evidence. How individuals are responding is quite interesting. Some predictable, some disappointing. We are quickly becoming a police state. WHO ARE YOU AFRAID OF?

*(With The Light, a Japanese drama show about a mother raising her intellectually disabled, severely autistic boy named Hikaru in Japan)

not more shallow sensationalist “Good Doctor” savant trainwrecks. I don’t condemn nor dislike savants, but they represent a small minority, not the majority of, ASD sufferers.

I think it's a shame that anti-vaxxers don't stick together in our common endeavor. Now that the PTSB have stepped up their game to include adults in their attack it's inevitable that the group of protesters will increase in number. We should welcome them to the cause. It's possible that some people may have not had children at least partly because they saw the increasing interference by the state, and didn't want to bring children into that world. Perhaps we should have been more aware when we had our children, and perhaps they should have supported us in our battle to date. But the fact is we're all in the same boat now and should join forces to fight the coming evil. Things are going to be a lot nastier than they have been so far.
I remember I commented here when CHD was founded that I thought the title was unfortunate because health does not only effect children. Now we're seeing how true that is.

I don't know about the rest of you, but my vaccine injured adult child who is recovering from a second freakin regression because a Dr went against our wishes and gave him the Hep series, even though he had it in highschool and it contributed to his first regression, BREATHE!! keeps me busy!! I don't have the energy or strength to go out to purposely be disruptive!! I'm so tired of all the lies!!

Brilliant article Kim. As someone who is very active in the “anti vaccine” movement in Los Angeles, it was surprising to find out, from the media, that “we” were there that day, and had done such confrontational things. “We, anti vaxxers” weren’t even invited to this event.

The media is starting to stir up something and I fear it has more to do with abolishing the 2nd Amendment than vaccines. Once the world correlates violence with the “anti vaxxers”, everyone will be crying uncle.

Wow, they are stooping low!

An LA county official, Hilda Solis, says that in the future they’ll set aside a space for antivaxxers to express their views without disrupting the traffic flow of those getting or giving the vaccine.

I think that’s a good idea, give them free speech without disturbing others, but I don’t think it would change anyone’s mind at the site one way or the other. I think blogs and blog comments are where learning and opinion-forming take place these days. I like books, but it’s too soon for timely information from authors I trust on a topic that’s changing every day to be available from books.

I’m glad CHD and AoA have disavowed it. I think the participants were sincere; church members were involved, and I’m sure they believed what they had on their posters was true. But I also read there was shouting and heckling of people in their cars, which is never acceptable and always counterproductive. And it has lowered the vaccine-critical movement in the estimation of many people.

Kim, I already posted about this when it happened. The key is the livestream video of the event that I also posted. It showed that the protestors were totally peaceful and were not blocking the gate. It is even on video that the videographer commented to the police that they were closing the gate for no reason and that it would be reported. This is now standard procedure for protests. Either infiltrate with violence or blame them for something they didn't do. The goal is to shut down free speech. Pharma wants NO speech warning about the vaccines.

Shame on CHD for condemning this peaceful group. They played right into the hands of the Pharma censor police.

I saw the signs carried by some of the protesters: I think they were sincere anti-vaxxers. I also read many articles about it. They said the event was delayed by an hour, but they were able to vax as many as planned. I think that is true, with so many witnesses and so much written about it, and it could have been exaggerated and dramatized. One man had taken his 90 year old mother, who was fragile and couldn’t wait for a long time. Everyone had disrupted their schedules and planned their day around getting the vaccine. Everyone there had decided the vaccine was the best way they knew of to prevent the disease in themselves and not transmit it it others (there are several recent studies supporting that).

I think the protesters were insufficiently informed and offensive in trying to prevent adults from carrying out a very defensible decision. I don’t know what positive result either in changing hearts and minds or influential press coverage they were expecting.

My 93 year old neighbor was taken by her daughter on the first day of the Faurot Field mass vaccination event here on Thursday. The more reactive Moderna product. Both received the vaccine. I talked to my neighbor yesterday and she seemed fine, cheerful and talkative. I’m glad she got it, she’s not genetically prone to react to vaccines and gets a flu vaccine every year, which I never would: one paralyzed my father. I would be sorry if she died of Covid, which is still killing around 3,000 Americans a day.

I was glad to see CHD disavow this event, but mostly because of how it was being portrayed in the media. After the insurrection (that’s what I assert it was - don’t @ me) it was easy pickings for the media to take down any event contrary to the Pharma narrative. One outlet even maligned the event with white supremacy. I think one of the goals here too is to portray the vaccine risk aware as activists synonymous with anti-abortionist whom protest clinics. We shouldn’t take the bait.