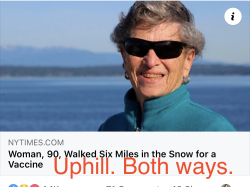 NY Times reports that a woman, 90, walked 6 miles to get her Botox. I mean..... you know. How long before there will be St. Bernards padding about the roadways soon delivering rum and vaxacola. I surely admire her stamina. I hope she keeps it.

“I’d walk a mile, for a Moderna” NYTimes article here.

It’s pretty amazing, for sure. She’s a strong woman. I wish her well. Kim

I thought that was Bill Gates with earrings!

True story. Read it in our local paper.

But Goldman made it to her appointment just 5 minutes late, which was fine. Had she been early, she would have had to wait in her car — which wasn’t there.

Back in Buffalo, Ruth Goldman wasn’t terribly worried about her mother.

“We’re outside people,” she said. “We love being outside. I was out yesterday at Lake Ontario with a wind chill of 6 degrees.

It says she finally found on the computer lots of appointment times. She could not believe her eyes. She had to go get her glasses. Yeah I guess I can believe that since I did know two 90 year old that wear their glasses only some times. My glasses are on my face first thing in the morning and last thing at night. Use to not be that way. How come both my far and near vision went bad for me?

Then came six inches of snow. She was afraid to drive, but not walk.

Her daughter lives in New York, all the way across the United States That is a long way for an 80 year old

At one time our news media would verify their stories, and we trusted them to do so

Now we can’t even trust them to tell us about polar bear populations.

They say polar bear populations are falling because of global warming , but there is actually a biology society that does count them, and they say the population has exploded. So much so that people in big cities in Canada have been attacked in the streets.

They twist the story of finding a cross between a polar bear and grizzly, that polar bears or grizzlies are migrating more because of global warming.
But biologies have know for a while that a polar bear is a white grizzly.

I mean if they breed and make babies. Then those babies grow up and breed just fine they are not a hybrid mule.

How do we verify this story of a 90 year old obsession with a vaccine that she walks both ways through six inches of snow. I want the New York post to verify I want video and film. I want yeah how do you verify, any more?

Its Mad mad and mad! anyone know her pass it on..As we noted on here months ago..the test is Fake as Fake can be.. Which in turn means no need for a prison like lock down but now they can lock us down every time there is the equivalent of a flu kicking about.

Your Coronavirus Test Is Positive. Maybe It Shouldn’t Be.
The usual diagnostic tests may simply be too sensitive and too slow to contain the spread of the virus.