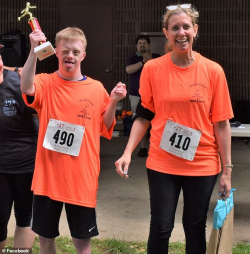 SEYMOUR CT— Police say an investigation has revealed a Monroe woman “intentionally drove” her vehicle into the Housatonic River in July, leading to her death and killing her son who was a passenger.

The Detective Division has deemed the crash a murder-suicide, Deputy Police Chief Roberto Rinaldi announced in a statement Wednesday that stated the investigation has been completed. Read more CT Post Police: Monroe mom 'intentionally' drove car into Housatonic in murder-suicide involving her son

Hello, readers. I live in Connecticut in the next town over from Monroe. The Housatonic river that runs up 149 miles up into Massachusetts, dotted with shuttered factories in the Housatonic Valley . Factories that used to manufacture the products that made America run back to Colonial times.  On a warm Summer day, powerboats and sailboats dot the water that flows into Long Island Sound in Bridgeport. We are not strangers to catastrophic death here. Sandy Hook School is just 14 miles up the road. The perpetrator of that horror was a boy with Asperger's. He killed his own mother in the spree. Here, Mom, as determined by an investigation, a woman known to so many as a strong advocate for her son with special needs, loved by so many, purposefully drove her vehicle off the road and into the Housatonic. And she turned down assistance.  “The boater made numerous attempts to rescue the occupants of the vehicle,” Rinaldi said. “However, Connie Crowell refused to acknowledge or accept the boater’s assistance and rescue efforts.”

I'm on a large Facebook group for CT Special Needs Families. We have members from all walks of life, whose loved ones have the full array of disabilities, autism included.  There was a tribute thread in which member after member expressed shock, dismay and a deep sympathy for Connie Crowell and her son John.  She was beloved. A great Mom. Strong. Moved heaven and earth for her son. Don't we all? Day in and day out. And then she drowned him. Will we never know what motivated her? Having covered stories other Mothers who murdered their special needs children including Gigi Jordan, Karen McCarron and Dorothy Spourdalakis, and not knowing Connie personally, I assumed my usual role of adding another perspective to the thread. Not sure it was welcome, but I have said this every time a parent has murdered his or her child with special needs.  WE ARE NOT ALLOWED TO KILL OUR CHILDREN.  And then asked if MEDICATIONS played a role.

My comment on Facebook: I’m going to poop in the punch bowl. This is a horror. I understand the depths of despair and the incredible stress we all face. We all do. Still, we don’t get to murder our children. If she had been a distressed Dad and shot himself and his son, would the thoughts be as kind and understanding? My first question is - was she on medications for which the side effect is suicidal ideation? I think that’s really important. Was this a medication driven decision?? She drowned her son. Years ago, Wealthy Gigi Jordan shoved pills into her son w autism until he seized and choked on his vomit at the ritzy Peninsula Hotel. Dr Karen McCarron put a bag over her autistic 3 year old daughter’s head. Dorothy Spourdalakis stabbed her son Alex to death after he had languished in a Chicago hospital for weeks bc of his violent behavior. This beautiful boy drowned at his Mother’s choice. We don’t get to murder our kids. I’m going to cry now.

By late July, Covid lockdown had taken a toll on all of us. We were four and a half months into the worry, the lack of services.  At age 22, John, called Jack,  would have just aged out of any school based services, and no one was taking in new adults into programs. My daughters' day program still has not enrolled adults who aged out last year. We are all exhausted, sometimes, maybe often, to the breaking point.  Now we have had a weather catastrophe that's impacts thousands of families with kids for whom routine and sameness is mother's milk. (Sorry, "people's chest expressed beverage.")

No one will know what darkness overtook Connie Crowell. Or how to prevent the darkness from devouring any of us. May God bless their souls, especially John, who died knowing that his mother killed him. It tears me up inside.

Of course we are not allowed to kill our children. We all know that. But we cannot simultaneously attempt to convey to the world that parents of special needs kids are reaching their breaking point and desperately need help, and then when one of us does finally reach their breaking point, ditch them, abandon them, disown them. She reached her breaking point! She needed help. She didn't get it, obviously.
I'll reserve my judgment for every person, every agency, every educational or medical professional who did not get there for her. I will not judge this mother or any other mother in her shoes.

Yes, a terrific tragedy. Those of us raising children with disabilities, especially autism that we are so familiar with, can understand the difficulties involved. Although questioning medication that the mother may have been on to help her cope(altho we don't know) as a suggested possibility for the suicide--can often be misconstrued. Hard for some to understand that some medications can actually help people.
Maurine

I understand that we can't condone these acts, but I don't think we can judge each case either. I don't want to be sexist, especially as there are many devoted Dads reading this website, but usually cases of fathers murdering children involve a man who is only having a visit with the children and doesn't have to look after them 24/7/52. It is usually spite rather than desperation. The case of a sole carer is different. Those who have never reached the point of being physically unable to manage what is required always assume it's an emotional crisis. Before the lockdown few had experienced there being NO help, but I had. Luckily for me, my sons had the ability to survive alongside me, but the willingness of the government to allow them to have to forgo their education gave me an insight into what the future held. What a pity no-one listened to me. Governments around the world are now murdering those in carehomes. Let's turn the spotlight on them. They have brought this situation about out of personal greed. Full stop. No excuses for them.

Kim, one surprise I’ve had in showing “Hide Your Love Away” to audiences for feedback is their occasional stubborn defense of Buck, the “ignorant” biological dad who calls his son a sociopath.
Some viewers sympathize with him. I’m one of them. After the real-life group home failed, I drove to a remote corner of Missouri to meet and pray with the real-life “Buck,” stepdad to the real-life “Zero.” I am convinced that Buck loved his stepson. I originally wrote him as a more sympathetic character, but the movie needed a bad guy, so Bryan Douglas, the Buck-actor, willingly shaped his character into a villain, with the understanding that he could be fleshed out and redeemed in a later episode.
Maybe it’s time to write that episode. We are not allowed to kill our children. But loving mothers do. Why not loving fathers? Maybe it’s time for Buck to speak.

Hirsi Ali and Bill Mayer supporters. THESE CRIMES ARE ALSO AN HONOR KILLINGS. The murder of disabled children or young adults by their family. Middle class white women can do it too.
Why does the media on both sides of the political spectrum and society have a soft spot for this horrible crimes of murder of disabled people. Hypocrisy and double standards that is why.

"My first question is - was she on medications for which the side effect is suicidal ideation? I think that’s really important. Was this a medication driven decision??"

I wholeheartedly agree … if for no other reason than to RULE OUT any medications as a contributing factor … but .. if history is our guide .. WE WILL NEVER LEARN IF MEDICATIONS CONTRIBUTED TO THIS TRAGEDY … 24 HR NEWSCYCLE BEFORE THESE TRAGIC DEATHS ARE FORGOTTEN AND TWO MORE VICTIMS OF THE AUTISM EPIDEMIC JOIN THE EVER INCREASING LIST OF "COLLATERAL DAMAGE".

Unfortunately I believe we have finally reached that age when our autism diagnosed children are becoming ADULTS … 18-21 years of age … just like 22 year old Jack and my own beloved grandson age 21. I suspect these are the children that BEGAN the autism epidemic .. when recommended and approved vaccines had been increased due to 1986 act that provided vaccine industry with PRODUCT LIABILITY PROTECTION …. and increase in vaccines that is NEVER GOING TO STOP AS LONG AS VACCINE INDUSTRY REMAINS FREE OF THE "COLLATERAL DAMAGE" DONE BY THEIR PRODUCTS.