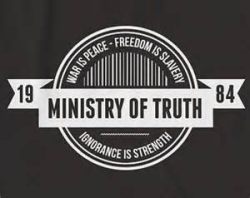 I’ve scaled back on posting on my personal social media accounts for about a year now.  Being online on those platforms isn’t as fun as it used to be.  When I joined them, they were a place to share things with close friends and family.  Over the years, the platforms became more than that.  A place to connect with other advocates, to share resources, and to keep updated with legislation and politics, those websites were a lifeline for me.  Available 24 hours every day, I loved being connected to so many people across the world.

Lots has changed since I joined Facebook back in the mid-2000s.  The games and apps, like the Flair Board, were simple yet creative ways to pass the time.  Over time, I saw the platform turn into an interactive and useful message board.  People became more involved and invested in their online voice.  Groups, communities and followings shaped what I did both on and offline.  Connecting people from so many places, Facebook, Instagram and Twitter were truly a great concept.  But the more people spoke up about their passions, the more silenced their voices were. 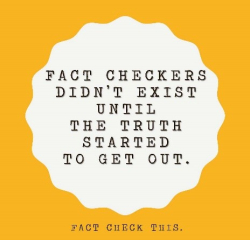 I don’t recall exactly when, but the powers that be didn’t like what they were seeing.  That’s when the Fact Checkers showed up.

Fact checkers took the fun out of social media, including on FB.  When they came out in full force, I’d still want to share funny things my kids say on my page and post silly memes hoping to make people laugh.  But long gone is the desire to use my account as a means to share personal stories or to use it as a virtual soapbox like I had been doing for years.

Not that I shared anything inaccurate, but I got a warning just a few weeks ago from Facebook that a link I’d posted wasn’t completely true (according to their standards).  I supposedly had taken some news out of context.  In reality, what I’d shared didn’t fit their agenda.  That wasn’t the first time I’d been told to watch what I posted.  As the creator of our Age of Autism Pinterest page, I was permanently banned from using that platform in 2019. I was never a big fan of their setup, but their message was very clear–posting vaccine truths will get you deleted.

In the beginning on other sites, people would just get a slap on the wrist like the one I had received on FB.  An opaque overlay 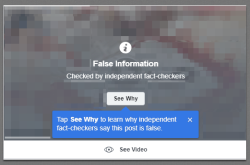 would cover the information a user shared.  Some Fact Checkers went a step further and added several links at the bottom of the opaque overlay that countered the poster’s original message.

Rarely would I ever click on the links when I saw them on my friends’ posts.  It’s a fact that for every study or article a friend might share, another study or article could say the exact opposite.  Those policing social media platforms still wished we’d stop thinking for ourselves entirely and stepped up their game.  Besides making it harder to read what others shared, people would lose the ability to log in for a certain amount of time.  I’ve yet to be put in it, but friends have done 1-, 3-, 7- and even 30-day stints in FB jail.  Others get the boot completely like what happened to us on Pinterest.  Without warning, accounts and pages are deleted altogether.  Some people are calling it quits themselves.  No longer willing to play the cat-and-mouse game, they want nothing to do with the censorship the social media giants are encouraging. 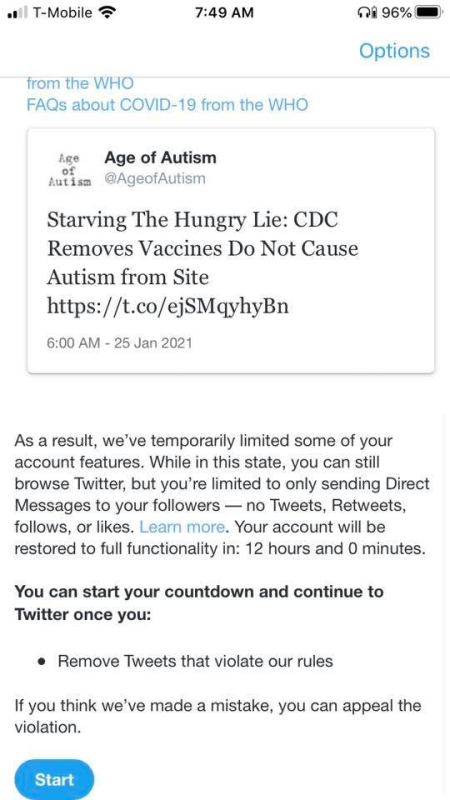 Twitter must not have liked that she included such damning evidence or links from non-sanctioned sources.  If you read her post, you’ll note several references/links are the words taken directly from news stations, from government documents and from the CDC’s website as well.  What Ginger shared was nothing new.  Nor is any of it false.  It’s just not what the Twitterverse wanted.

Over the last few weeks, I’ve noticed that FB now fact checks memes, so I want to put them to the test.  These screenshots include information found in recent news reports and from government websites.  Will we be allowed to keep our post up on our FB page without any repercussions? 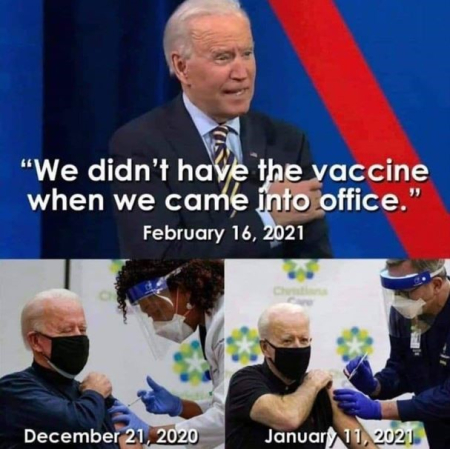 Did he truly forget?  Whatever you call it—a lie, a Biden gaffe or a verbal stumble,  the information in the meme is accurate. 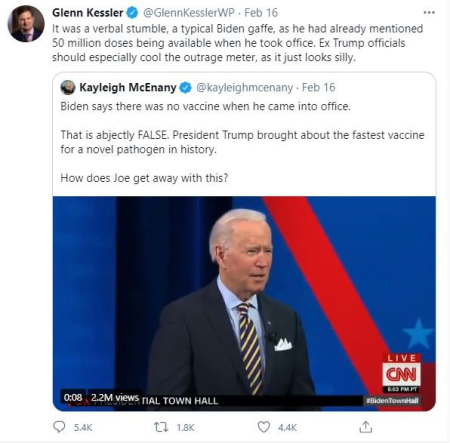 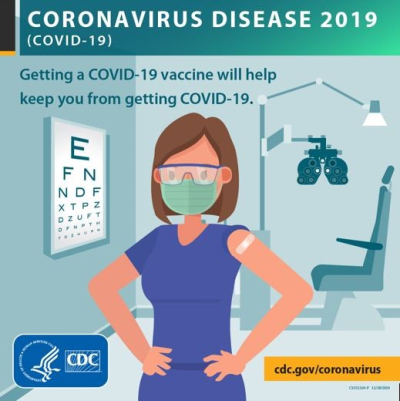 Those are screenshots from the amazing internet.  Kudos to those who make them and share them!  The ones below were found directly on government websites or created with exact wording from those websites.

I don’t know how the CDC can share that image above without some Fact Checker losing his mind.  The CDC’s own literature, as well as the FDA’s,  states otherwise:

Claiming mostly successful outcomes, the CDC can’t keep up with what they’re saying and with what’s being reported.

Maybe they haven’t detected patterns because the vaccines are so new and they haven’t gone through the typical long-term studies usually required.  Those currently receiving the experimental countermeasures now are creating the missing and important data so many are curious about.

Despite what the officials are sharing, the data is adding up.

The Truth is always there.  Sometimes you just need to look a little harder to find it.  That’s a fact no matter what the subject is.

Fact is that coronavirus vaccines are causing some problems for some people.  It sounds awful, but with how quickly they were rolled out, that was to be expected.  It’s a shame I, and other advocates, are shying away from sharing some of that type of information like we used.  The message is clear, though, if we do share something – you best know what you’re talking about, and you best site your sources.  You will be shut down otherwise.  Unless you’re in a position of power (YouTubevideo), I guess. Then you get all the free passes in the world to say whatever comes to mind, even saying things that aren’t true.

One cannot expect president Joe to remember something difficult like the CV19 vaccine, that they have been talking about all day, every day, for over a year.

They came for the children nearly 30 years ago, they are now going after the nursing homes and beyond with the same weapon.

@IamSad No, it is never OK to force drug, restrain and assault someone. My heart hurt and I felt sick when I read what you have suffered. Are you out of that horrible place? If not, is there a decent employee or family member you can report to? Please do not wish to pass away...I can't imagine how hard it is to relive that, but please do not give up.
I wish we could get national legislation passed to protect the rights and safety of those who are supposed to be protected and cared for. If only our government cared about our vulnerable citizens more than they do others...

Is it okay to force drug and restrain and tease and push behavioral coercion on autistic people in mental wards? Or does it create trauma? Especially in Florida where I was raped by 6 “doctors” at once?

When can I peacefully pass away? My condition caused me to have major meltdowns and lack of verbal communication, painful and expensive therapies, and being assaulted and threatened by staff for so called “safety” reasons. Restraint, coercion and torture is Totally legal in Florida sadly.

How else can we end restraints and seclusion?

Misinformation is a word (along with dashboard) I would like to put in a backward DeLorean.
So 1984.

It is difficult, now, to know what to post - or not. I suspect many of us have had our virtual hands slapped and been in virtual jail for a period of time.

Nevertheless we must keep on keeping on in whatever way we can. I do think more people are beginning to question what is behind the whole saga. A couple of people I spoke to today both had similar sentiments: they believed those that had been compliant so far would start to rebel if, after the majority of the older population had been vaccinated, the restrictions were still in place.

I do hope they are right.

Live version which could get edited https://www.thehindu.com/news/cities/bangalore/vaccine-acceptance-low-among-well-informed-people-in-karnataka/article33883854.ece

I wonder how the fact-checkers will deal with this one:-

“The more informed healthcare workers are, the less convinced they are about COVID-19 vaccines. We have noticed that hesitancy is high among specialists and super specialists”

SOMETHING MUST BE DONE … our country cannot continue to allow a handful of extremely powerful .. extraordinarily wealthy people … the UNRESTRAINED POWER to deny our CONSTITUTIONAL RIGHT TO FREE SPEECH … IT MUST END OR OUR COUNTRY WILL NO LONGER BE .. OF THE PEOPLE .. BY THE PEOPLE … FOR THE PEOPLE …

Unfortunately … we the people have no where to go to regain OUR CONSTITUTIONAL RIGHTS … we can no longer rely upon our basic institutions … CONGRESS, SENATE, SUPREME COURT, MEDIA, ON AND ON … ACADEMIA, PUBLIC HEALTH AGENCIES, WHO, WORLD ECONOMIC COUNCIL .. ON AND ON …