A Dose of Encouragement from Connecticut 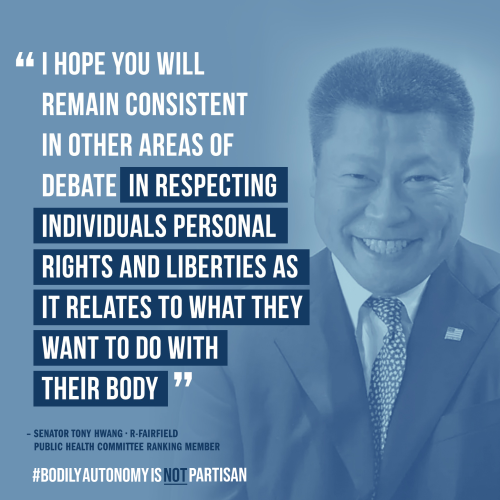 I prepared this post mid-afternoon yesterday in the middle of a blizzard, hoping we would not lose power or Internet service. I don't have to tell AofA readers what a house without WiFi is like when you have one (or two or three) children with ASD. WiFi is our lifeline. I shoveled twice hoping to get ahead of the snowfall. However, I was like Sisyphus pushing the stone uphill, only to have it roll back down. Maybe you've heard the phrase, "The snow is coming down in buckets."  Today it's coming down in barrels. Kegs. Maybe even giant shipping containers! It's beautiful, and kind of nice to be "trapped" not by Covid, but by Mother Nature's beautiful blanket of white snow. I'm on several Health Choice groups on Facebook. The religious exemption is on the chopping block here in Connecticut again this year.  Almost a year ago to the day, we were in Hartford expressing our dismay to the Health Committee about the removal of our religious rights for our children. We staved off the bill. But like that stone rolling back downhill, it's up for legislation again, and the Democrats who were in favor of keeping the Religious Exemption were removed from the health committee.

I was so pleased to see this graphic on Facebook. Tony Hwang is my state Senator. Let's thank him and share the hashtag "#BODILYAUTONOMYISNOTPARTISAN far and wide.  Bodily autonomy is not party based. Or it shouldn't be, Here in Connecticut we have a right to choose each aspect of our health and also our personal gender identification, male, female or non-binary.  We believe in letting people make their own choices. Until we don't. On one topic.

There is so much more research coming out implicating 'untethered' wi-fi as a culprit in autoimmune disorders, cv, and many other ailments.

You are probably aware, so personally I just wanted to mention this to readers who might not appreciate the difference--I myself refer to hard-cabled internet connections these days as just 'internet' so as not to imply that wi-fi is actually an intelligent option if the connections to the router aren't actually 'wired-down'.

Our family has lived through robbery/ arson. It was overwhelming at the time, but so many helped us out in many ways. I will always be thankful.

Here are true doctors who practice informed consent. They need our help too:
Medical Board Attempts To Strip Doctor Of License Over Informed Vaccine Consent
https://ise.media/video/exclusive-medical-board-attempts-to-strip-doctor-of-license-over-informed-vaccine-consent-79.html

Not exactly related to this post, but, if this family lived in CT, they would strongly support Senator Tony Hwang.

I know the Davis family personally. They are wonderful people, and a tragedy has befallen them in the form of a house fire. Please read this short paragraph about what happened, and if able, please make a donation to help them through this difficult time.

Community is not about immunity. It is about being involved with others, and helping each other when needs arise.

I had trouble finding the "sending to a friend" option on PayPal, so I am opting to send a check via the mail (link above provides info on how to do that).

Thank you for your consideration of this request,
Laura

*P.S. Joy Davis was a tremendous help during CA freedom fighters' battle against AB2109 in CA. She strongly supports medical choice freedom, religious freedom, and parental rights, as does her husband, Rand.

God Bless you state senator Hwang. How I wish you were a United States Senator. So few politicians of your caliber and honesty remain. Blessings to you and yours. Love and Liberty from Texas!
G. Martinez

If that is true .. and as we all know … all adverse reactions are VOLUNTARILY reported to VAERS .. with evidence to show no more than 1% are ever reported … we are not being told the HIGH RISK OF DEATH associated with Covid vaccine.