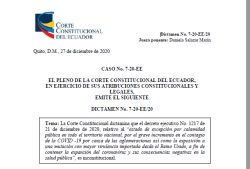 On January 2, 2021, Ecuador's highest court ruled the new state of emergency decree of December 21 2020 unconstitutional. HERE The Constitutional Court held that the reasons for the invocation of emergency powers - the allegation of increased "contagion" of Covid 19 and the future possibility of a new UK virus strain - were not sufficiently compelling to justify a one month state of emergency applying to the entire country.

The court ruled that narrower measures tailored toward protecting public health are available using non-emergency governmental procedures, and furthermore that a new state of emergency cannot be declared based upon future not current conditions nor can it be based on the same set of facts used to justifiy the earlier states of Covid-related emergency last year, the last of which expired in August.  Although called a state of "exception," that is Ecuador's particular language for a state of national disaster which gives the President extraordinary powers to curtail citizens' constitutional rights including freedom of assembly and freedom of movement both of which had been restricted until yesterday's ruling. The Court's decision which was reported to have been signed six days ago, was not released until the evening of January 2.The front page article and the text of the full decision is in the Ecuadorian newspaper of record El Comercio today, January 3, 2021. The following link may or may not work anymore but the newspaper's website (below) should bring up this morning's article or at least a follow up. https://drive.google.com/file/d/1A_VDK9aHV1cS1XTepwsXFw-fmuvZkOGP/vie General link: www.elcomercio.com

All those aborted babies in New York will soon have their revenge:

Under this bill, citizens could even lock up Cuomo himself. All in the name of PUBLIC HEALTH.

Bill, actually Ecuador quelled the epidemic by not testing many of their citizens. To date, they have run only 42,575 tests per million population versus 783,469 tests per million population in the US. Also, I bet no one is counted as dying from COVID after a motorcycle accident or when critically ill with cancer in Ecuador. Btw, the median age in Ecuador is 27.9 years...over 10 years younger than US. Population ages 65 and above in Ecuador was reported at 7.37% vs 15.2% in US.

At the very least, there should be a disincentive for governments to declare these. For example, every governor who declares an emergency does not get paid for the time the emergency lasts.

I believe most of the Covid related quarantine measures have gone to far! Most countries including the US and Ecuador allow for rare constitutional exceptions related to public health and safety and it should be so. Wayakil a large city in Ecuador was on fire in April and May of 2020 with Covid infections and deaths but, the draconian measures reduced spread of the infection by 90%.

John, If I'm not mistaken, I believe their High Court members are elected by the population. If so, that could make the difference between the US and Ecuador. Interesting article.
Maurine