Home Donate Contact Us Special Reports Science Email Subscription 2021 RSS Feed 2021 Our Mission
Dangerous and Irresponsible (No Not Us)
Ring In the New Year With Bell's...Palsy 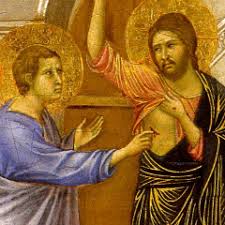 Thomas, called Didymus, one of the Twelve, was not with them when Jesus came. So the other disciples said to him, “We have seen the Lord.” But he said to them, “Unless I see the mark of the nails in his hands and put my finger into the nailmarks and put my hand into his side, I will not believe.” John 20:24-25

Thomas, one of the 12 apostles is also referred to as Doubting Thomas.  You can see in that scripture passage above how he earned that nickname.  Not present when Jesus found the apostles hiding in the upper room, Thomas found it hard to believe that the Lord had tracked them down.  I hadn't thought about this passage in quite some time, but the latest vaccine news has me thinking more of Thomas and how his doubting attitude kept him from believing what the others were telling him.

Not until later, when Jesus was face-to-face with Thomas, would Thomas believe that Christ had actually risen.  I imagine that realization was quite profound.  I don’t think they’d have thrown a party, remember – they were still in hiding, but I also imagine that the mood behind their locked doors was somewhat celebratory.

I, like Thomas, have doubted some facts myself.  Vaccine injury?  COME ON!  Surely that's a made up thing.  I’d thought that because for the longest time I'd only be told that vaccines were safe and effective.

They were there to help my child.

I believe that a majority of the public, despite the US establishing a program to compensate those with vaccine injuries, still believes that, too.  The latest headlines are finally reporting another story though.  Severe vaccine side effects do exist!

And it’s nothing celebrate.

Vaccine injury?  Like that would ever happen.  But it did.  And it still does.  For some, it will last a lifetime.  Shockingly, people are saying they will still get in line to get the new Covid vaccine. 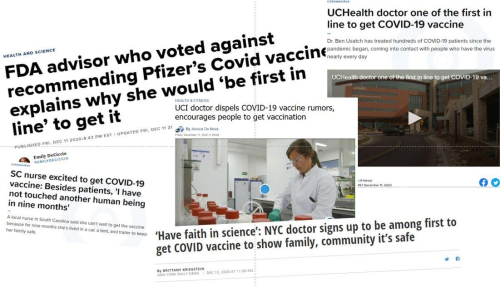 Vaccine injury happens.  It happened to my child.  It happened to a lot of children.  It’s happening all over again, now to adults, with the fast-tracked, minimally-studied, liability-free COVID19 vaccine.  But until vaccine injury happens to more people, I think it will still be a hard fact to swallow.  I’d never wish any injury or reactoin upon anyone, but even so, remembering that Gospel reading about Thomas this week made me thankful for two things.  I thank God that I don't need to physically see Jesus to believe that He exists, and I thank God for those people, who despite how incredibly bizarre it sounds, believe that someone can be injured by a vaccine.  I, for one, thought it a crazy notion myself, but through personal experience I finally saw it happen.

For those who have not been personally affected but who believe that vaccine injury is real, not because of what you’ve just read in the papers but because you saw our children suffer years ago, thank you.  You saw our kids.  You saw their pain.  You heard our story and understood our worry.  You know that none of it has been easy for us to handle, but you believed.  Bless you for that!

…Blessed are those who have not seen and have believed. John 20:29

Thank you for not doubting, for not belittling and for not turning away.  By just believing, you made things a little bit better.  Over the years, you gave people like me hope.  I needed that hope to continue to fight for my son, to continue to advocate for his needs, and to continue to want to speak up.  I’ll need that hope now more than ever as I watch the world react to the latest vaccine news, to the COVID19 vaccine itself and to the negative consequences that will surely come from it.

Thanks, Cathy, for the link to the VICP. We need all the FACTS we can get! Maybe you could do a follow-up with a link to the CICP page? Remember, if the Covid1984 vaxxx injures you, you will NOT be able to access the VICP. The Covid1984 vaxxx is rolling out under an EUA, or Emergency Use Authorization. And fake news media is calling adverse reactions "immune responses", to further cover up the TRUTH....
KEEP UP THE GOOD WORK!....

"Thousands of experts are putting their careers, incomes, reputations and their very lives at risk to speak out against the COVID / Corona Hoax - especially against the experimental vaccine technology which is being rolled out worldwide. In this video I feature many of them (but by far not all) and I give my commentary as the video goes along. I hope this will help people wake up before it is too late."
https://www.amazingpolly.net/
It's the one at the top.

Thank you again Cathy for a very informative article about the fact that even though many people do not believe it, vaccines can and do cause injury just as they did to our children years ago when they received them. I have friends who have grown children with autism and they still do not believe that the vaccines were the cause of their child's autism diagnosis. I wish I had not been so trusting of the doctors who gave my son all those shots supposedly for his own good. I also wish the pharmaceutical companies who fast tracked this new and dangerous covid vaccine would fast track trials to find a cure for our children's damaged immune and neurological symptoms. We have waited years as my son is an adult and nothing has changed. How much longer do we have to wait for our children to be saved from this tragic condition. Hopefully it will happen before we are all dead and no longer here to protect and take care of them.

As the Amazing Polly says everything they dont want you to talk about and if you do talk about it they name you a conspracy theorist....Could be worse I suppose!.."Build Back Better" without all the Globalists I would support it then....

No one likes you, Klaus - Amazing Polly

You forgot. Dr. Andy Wakefield would get to randomly select each jab from the manufacturing site. He would note all lot numbers. Also, don't forget the dry ice and a 2 hour kitchen timer. LOL!

That was me --- doubting Thomas.
Such a thing does suddenly opens your mind to a lot of other things though. Not much of a silver lining in all of this, but there is that.

It would seem the CDC would simply want to line up the NFL, surgeons, nurses, Congress, the Gates and Fauci families, and a few others, to receive the CV19 vaccine from a new, 19 year old tech at CVS.

Time for them to “put on a show” with cameras rolling, I am sure the American news media will show up. What better way to provide some confidence with a new medical product to the American public ?

Thank you so much, Cathy, for this excellent post.

I, too, am so grateful to those people in my life who have, not only understood how my family members feel about their injured children but, also, are open minded enough to believe what caused their disability. They are very special people.