When Pediatricians Made House Calls Not CPS Calls 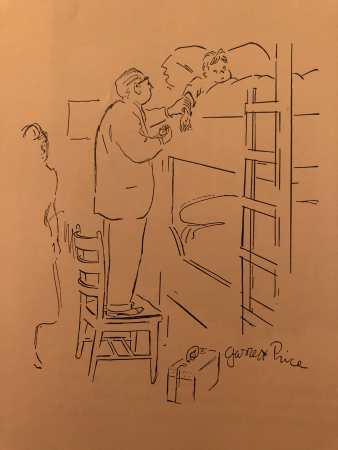 I have a 40th Anniversary New Yorker Cartoon book. From 1965! In it is a rich treasure trove of cartoons that speak to the era of 1955 - 1965. And while some seem to be relics, others brought me a sharp sadness or bark of laughter. This cartoon caught my eye. Every day on Facebook, I see Moms seeking a new pediatrician to act as a partner in care. Not just CEV Chief Executive Vaccinator. Why? Because their current pediatric office fired them for not being vaccine compliant. Pediatricians used to make house calls and.... care. Seems like a "reach" today, doesn't it?  Funny, tidbit, the artist was from Kansas, but died in Norwalk, Connecticut, not far from the Age of Autism Headquarters.  ;)

Interesting illustration.
I am old enough to remember house visits, even in a rural working class area.