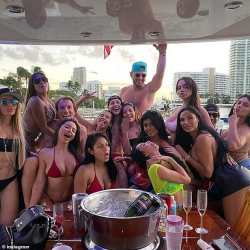 Internet phenom "Dr. Mike" was caught "partying hearty" (Sorry, I'm from Boston, mid 80s,  it sounds better if you say paahtee haahtee) sans masks with a  boatload (no really, a boat load) of beautiful women in Miami.  The media is reporting his great, hypocritical shame.  Yes, it's hypocritical.  Hypocrisy is everywhere right now. And shaming. And as usual, the biggest shamers are often the ones flouting the rules behind closed doors (ask a whole lot of politicians or televangelists who came out of the closets or went to prison for bilking their flock.) Remember when Dr. Nancy Snyderman (hey, where is she? Too old for TV?) broke the EBOLA quarantine to get a bowl of soup?

But I have another thought for you to consider.

I don't think Dr. Mike would jeopardize his million dollar medi-tainment career by endangering first, himself, and second (maybe third) the party-goers around him.  A healthy 31 year old man celebrated his birthday surrounded by friends. Maybe he didn't feel like he was putting anyone in jeopardy  because of his medical knowledge?  Doesn't matter if they are A students or DD Cups.

'Sexiest doctor alive' is called out for partying maskless on a boat while surrounded by bikini-clad women in Miami, despite stressing to his millions of Instagram followers to think before traveling, wear a mask and social distance

‘Hot Doctor’ Mikhail Varshavski has come under withering fire from his millions of followers after pictures of him ignoring his own advice by partying maskless on his birthday emerged.

Varshavski — who has found Internet fame as Dr. Mike — has been in the vanguard of stressing the importance of wearing a mask to stop the spread of Covid-19.

But he appeared to break all his own rules when it came to his 31st birthday party, for which he flew from New York to Miami on November 12 to celebrate.

Yes, Benedetta but that will only be the first step in their plan.

Oh, and Julie the first link the doctor is saying the master plan is to get the vaccine.
No, I think it was to lock us down; for a reason to do mail in voting to steal the election.

There are powerful people in play, and we have no DOJ or FBI working for anybody but themselves.

Julie thanks for both of the links.

Your second link: Mercola and that fermented soy bean -- supplement for breaking up blood clots, and cleaning out the sinuses --- sounds great!

Mine has sinus problems around here-- all the time. sounds great just for that.

Your first link -- No treatment to begin with on covid 19 , is what this doctor that got sick with covid 1 says is what is going on. Yeah; exactly! He was able to get hydroxychloroquine only because he got into some research project. He better be glad they did not over dosed him. He took steroids too.

...and don't forget the amount of people who are low in Vitamin D, many who would present as perfectly heathy people with no issues. We know there may be some people who may be hit hard by Covid 19; all the more reason to have low harm treatments such as hydroxychloroquine (along with other drugs that work well in combination with it) available to them. It is true that in Australia, in the state of Queensland, medical doctors can be jailed for prescribing hydroxychloroquine for the treatment of Covid19. I see this as criminal. In this clip, Professor Peter McCullough says that historians will be very unkind to countries that are restricting this drug. The way things are going, historians will not be able to have anything published that would criticise this approach because more and more people might see it as I do; an act that prevents a treatment of an illness that those in power want us to believe could only have been helped by a vaccine. https://www.facebook.com/CraigKellyMP/videos/3062330970660945
BTW, Mercola had an article today that you might be interested in reading about Covid 19 and vascular illnesses; https://articles.mercola.com/sites/articles/archive/2020/11/30/coronavirus-enzymes.aspx?ui=576408a94ace1d95b0707db8e709a087ee9ef1c10efeb83317c32a379414bbc7&cid_source=dnl&cid_medium=email&cid_content=art1HL&cid=20201130&mid=DM726511&rid=1023010410

Covid in itself often causes a hyper inflammatory condition.

Any infection or injury causes inflammation, and it is necessary that they do so, to kick the immune system into high gear. Covid is a new (bioengineered) disease, and I think the immune system often goes into hyper inflammation, at a loss for a more effective reaction. Like with the Spanish flu. The lungs often became hyper-Inflamed and filled with liquid, which drowned the patient. Like Covid.

My phone changed the maiden name of Cordero’s wife.

Well there is the push for every one to get a tetanus shot - really a DPT vaccine and that causes inflammation which is vascular in nature. For sure it caused my daughter's vascular disease of all her small blood vessels in her body (Kawasaki disease) . .

And then there is the push for every one to get a flu vaccine every year, and studies have found those getting the flu shot has a serious up tick of having a heart attack before the year is out. Maybe Nick had had a few in the last few years?

So maybe Nick did something like that?
What causes inflammation other than vaccines? Obesity I suppose. But I think even that stems from vaccines damaging the hypothalamus so there is that.

This virus was made to be caught with ease it seems.
I think that the population has done a lot to stop it. More than those that are suppose to be part of medical protocols to treat this disease have done, or even those that have more power than every day people --like making decisions to put covid patients in with the elderly.

My best friend in High School is so sensitive about criticizing Cuomo about doing that? Yeah, lost some brain cells, I think she has. She says there were so many people that they did not have any place to put them in New York. That she talked to nurses from New York and she knows? I don't think she really knows.

I just looked him up. Nicholas Cordero, died of Covid after more than three months in the hospital, 41 years old. Married Amanda Klondike in 2017, one son. Such a shame.

Yes, it is. It can cause hypercoagulation anywhere in the body. When it causes blood clots in the arms or legs, they often have to be amputated. That actor last spring, Nicholas something, I was surprised when he was hospitalized with Covid, and then his wife announced that his leg had been amputated. I was shocked, I thought Covid was a lung disease. A young man, in his forties, handsome, beautiful wife and three-year old son. Then I thought, well, he’s young, he’ll recover, people can get used to living without a limb. Then a month later he was still in the hospital and then they announced he had died of Covid.

I talked to my 92 year old neighbor the other day. She said she thought it was going to go on indefinitely since so many people were not cooperating with the measures, and she didn’t understand it. I said people were tired of it, and many thought that they’d rather stop trying and just get it, they believed, on insufficient evidence, that they and their children wouldn’t have a severe case, but would get probably permanent immunity. She became very sad, as it meant they didn’t care if she got it and died.

I saw that rates were going up in New York again. I don’t know yet what that means. I saw a map this morning with states in different colors. All but a few of them were red, meaning Covid is completely uncontrolled here. Including here, Missouri. When you look at the charts with what used to be impressive high lines for the first months, now the line is so high that the previous line looks flat. Several members of my neighbor’s large family have had it or been in quarantine from being near someone diagnosed with it. Many cancelled getting together for Thanksgiving because of the quarantines.

My neighbor inveighed about Trump, but stopped when I said I liked him and we had voted for him. I said he had taken several good measures against Covid, but had decided to defend the economy rather than going all out against Covid. I said it wasn’t what I would have done, but it might or might not turn out to have been wise. If Trump doesn’t prevail in his legal actions for fraud in the election, then we’re looking at a four to six week lockdown, possibly targeted more than the first one one was. I hope Trump will prevail, but I don’t think a lockdown is a bad idea.

This whole thing is going to blow apart soon...blaming, shaming, double standards, dishonesty, true hardship...even older people are starting to say the isolation is killing them.

Is corona virus a vascular kind of illness?

Oh What no mask ! Did patients or colleagues tell him to away and get stuffed with it ?
Another spectacular "specimen" of behavioural spasticity, from guideline stoogies, incapable of following their own cac-handed criteria, orders, or instructions .

Well, if you’re hypocritical and flout the measures, more people get Covid, more hospitals are overwhelmed, and more people die. If you’re OK with that, what can I say?

Gee another example of a medical expert or politician violating THEIR demand everyone else MUST practice .. such as .. avoiding large crowds, wearing a mask at all times, social distancing including never shaking hands .. on and on.

The examples of these HYOCRITS flaunting THEIR OWN ADVICE … RULES FOR THEE BUT NOT FOR ME .. is everywhere … shameless, arrogant, petty tyrants who are wallowing in the fame, fortune and personal power that COVID has provided them.