Home Donate Contact Us Special Reports Science Subscribe by Email Subscribe to RSS Our Mission
Is Governor Cuomo Asking for a Presidential Exemption to the Pfizer Covid Vaccine?
UK Report on Children Losing Skills During Covid 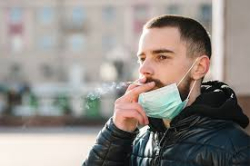 Here in Connecticut, I see almost everyone wearing masks to the best of their ability. I even see people with their mask around their chin while they smoke. My Mom in Massachusetts told me that last week she hopped out of her car and went into a store. A clerk said,"Ma'am, you forgot your mask."  My Mom felt ashamed. That. She. Was. Not Wearing. A. Mask. That. She. Forgot. Once. In. Her Car. Once.  When I see someone without a mask, I do not question them. I do not make faces or rude gestures. I do not run to social media to shame them. I surely do not confront them. Maybe they can't breathe well. Maybe they have a medical condition. Maybe, like my Mom, they just forgot.

From The Hill:  President-elect Joe Biden will personally call on governors around the country to enact mask mandates in their states once taking office next year, NBC News first reported on Sunday.

A Biden campaign official told the network that governors who resist the incoming president's requests will see Biden pressure mayors of cities in their respective states to enact mandates at the local level, potentially setting him up for confrontations with Republican governors around the U.S.

“If a governor declines, he’ll go to the mayors in the state and ask them to lead,” said the official, according to NBC. “In many states there is the capacity of mayors to institute mandates.”  Read more at The Hill.

Some day it will be Fauci on that well known list for releasing the covid and then making sure no one received the correct medical treatment.

Hi Benedetta,
To clarify, I was writing only about one particular doctor who announced in a store that a woman who was a stranger to her should be wearing a mask and was not disabled, based on the fact that the doctor had decided that she did not have "breathing problems".
I certainly agree with you that there have been many brave individual doctors who have done their best to help, right now in this, and many other situations, and whom I admire.
There have also been individual doctors who have been monsters, probably in this, as well as in other historical situations.
I would include here Dr Mengele, the doctors in the past who practiced human experimentation on children and prisoners, those who participated in the Tuskagee experiment , and I would also include anyone who knowingly gave, or arranged for others to give, a toxic dosage of medication so as to sell or promote an alternative product...

Kay, don't confuse the issue by putting Trump in the same category as Biden. Trump has done a lot in pushing back the deep state - obvious to anyone who is paying attention, which is why the agenda planners and their mind controlled masked minions have been throwing a several-years-long tantrum, ever since he announced his candidacy, and are pulling out all the stops to try to get rid of him.

The crazy armchair Monday morning quarterbacks all have ideas about how he could do things differently, but I have observed actions which are unprecedented.

Should Biden become president he would be better advised to clean up the crime and filth in our large cities and forget his foolish mandates that most Americans will rightly ignore. Also, since Biden likely is guilty of enriching himself and his family through influence peddling, money laundering, and lying to the public about the quid pro quos from his multi-million dollar deals with China, Ukraine and possibly other nations, he might have an impeachment in his future. Now I understand why he chose Kamala Harris for his VP - his insurance policy for avoiding impeachment. Most of Congress knows she would be a disaster as president, so they'll slap Joe on the wrist and not dole out the punishment he probably deserves.

Hera;
Charitable here, about doctors?
During this whole Plandemic, when the virus arrived we had doctors puzzled at why they were receiving the orders for standard of treatment to put people on ventilators, that obviously needed some kind of steroid breathing treatment. We had doctors standing on the Supreme Court steps screaming for the rights of their patients to have the treatment for covid 19. Nor were we warned that this covid 19 virus that causes all kinds of allergy responses; that if you are on blood pressure meds, either stop taking them or get an epi pen. Which are just in the last few years affordable.

Requesting again show me the scientific studies that show cloth masks stop the Corona aerosol particles. You should not be forced to take a dangerous vaccine or wear a useless mask against covid19.

Collectively we are the dumbest group of Americans ever. A Democracy requires a minimum level of collective intelligence. We are well below that. Hence we elect guys like Trump or Biden. Stick a fork in it. My condolences for anyone under the age of 50.

And what about all those people who don't NEED to wear a mask because they've already recovered from COVID-19? They're not a threat to anyone.

I’m sorry but I will take mask wearing over a vaccine, especially one rushed to market with no liability, every day. Not saying it is easy to wear one but the issues pale compared to a vaccine that has to be stored at -90. (How does that feel getting injected???)

I'm sorry, folks - you haven't been paying attention. You are not obliged to tell anyone what your disability is, even if it's the inability to cover your face because of psychological issues. If anyone including a shopkeeper asks you, or threatens to remove you from their shop, they are guilty of disability discrimination. In the UK that could land them with a £9000 fine. When I've said that they back off. Also in the UK doctors have been forbidden from writing or signing exemptions, and the government has put up an exemption card on their website for people to print off for their own use. So who's checking? No-one. The thing to do is, remain calm, polite, smile benignly, and then they can't arrest you for "breach of the peace" which was probably their only ever recourse. Masks can be dangerous, no-one should feel under pressure to submit to one.

I'm so sorry this happened to your mom, Kim.
My son is unable to wear a mask due to hypoxia significantly increasing his life-threatening seizures. He has a signed medical exemption, and yet, still, when we are out in public, people feel compelled to march right up to him and hiss "Where's your mask?" and "Get away from me!" He has significant receptive language delays and most likely only understands that evil people are randomly marching up to him and being, well, evil.
I cannot believe how Americans have become the ugliest, most deplorably behaved people on earth.

I have a couple of close family/ friends who just can't wear masks; my mother in law has respiratory issues, and probably most people would guess that, seeing her breathe as she walks. Another close friend has issues with claustrophobia.She is "lucky" enough to be able to wear a mask for a short period of time ( 15 minutes) if she keeps distracting herself, but that is it, before the panic attack sets in, and so there are many things she just can't do, and it seems likely won't be able to for months and months.
The people I feel really sorry for are assault and rape victims. Imagine being expected to explain, not only to the store person, but also to every critical fellow shopper who thinks you don't look like you have respiratory problems , that someone held your face down in a pillow and raped you while you gasped for breath, and that now wearing masks is something you just can't handle.
I read about some doctor who was explaining how she had told a complete stranger that she had to wear masks and was sure she was right because the person was breathing fine. Trying to be charitable here, but at the very least, the doctor appeared to me to be seriously naive, and apparently had never done much in the way of crisis work...

Well so much for uniting the country Mr. President elect! Clearly the country is divided on the mask issue as well as the scientific community. And he picks this issue as a first priority. Really! I will begin looking for my Cheater Joe Bumper sticker!. Seriously, If someone can show me the scientific studies that show that masks can stop the tiny aerosol particles of Covid19- The expert Dr. Faucci stated in March 2020 or April I believe that they did not! Keep in mind this is a man that has made Covid his life long study, So he is the expert, but then in June I think he reverses his opinion. So which one is it?

We have entered the age of manure substituting for science, where memes become medicine. It may be good for growing mushrooms, but not productive health policy.

"...a drop in oxygen levels (hypoxia) is associated with an impairment in immunity. Studies have shown that hypoxia can inhibit the type of main immune cells used to fight viral infections called the CD4+ T-lymphocyte. This occurs because the hypoxia increases the level of a compound called hypoxia inducible factor-1 (HIF-1), which inhibits T-lymphocytes and stimulates a powerful immune inhibitor cell called the Tregs. This sets the stage for contracting any infection, including COVID-19 and making the consequences of that infection much graver. In essence, your mask may very well put you at an increased risk of infections and if so, having a much worse outcome. "
Dr Russel Blaylock

The humanitarian law of "unintended consequences" is our last refuge … a MANDATE to wear masks by Biden as one of his very first executive decisions .. is going to cause tens of millions who already preferred Trump over Biden to RESIST .. which is exactly what tens of millions did for the last four years of Trump presidency.

How is this mask mandate to be enforced? What are the punishment for those who resist? Who will enforce it?

If a mask is mandated .. why not a vaccine?

I see any mask mandate as a source of even greater division in our already divided country .. where will it all end??? As I have often said … TYRANNY COMES IN MANY FORMS … OFTEN BY MEN WEARING FATIGUES AND ARMED WITH GUNS … OR .. MEN WEARING SURGICAL SCRUBS ARMED WITH SYRINGES … EITHER WAY … TYRANNY IS TYRANNY AND THE PEOPLE HAVE A DUTY TO RESIST IT WHATEVER FORM IT ARRIVES IN.