Covax a WIN in President’s Eyes

A win? Is that what CoVax is for President Trump? A notation in the “win” column? For you?  The swamp is overflowing. Read the Tweet below. He says that President-elect Biden would have made us wait. Dan Olmsted, gone almost 4 years, always wanted us to be politically Switzerland- neutral but factual & honest. Even if it ticked off readers on one side or another.  Right now, it seems we are Through the Looking Glass and into The Twilight Zone. President Trump is using the vaccine as a reason to fight the election outcome. 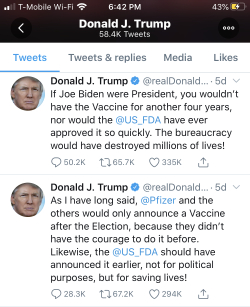 That was a joke!
But I did not know it was 14 more degrees below 80 degrees. WOW!

"I will be in the un-vaccinated control group."

go Trump, I LOVE your confidence. I, too, will join you in that group!
xo, Cat

Emma,
I have read that they can "keep" for five days after being removed from the cold store. However, it sounds like yet another risk to me, as to whether it is at a safe temperature at the moment it's administered. Will those administering it, who may be just about any old bod, have the scientific knowledge to be able to judge that? Unlikely.

I think that Trump's decision to cancel the Vaccine safety committee was the stupidest move EVER.

RFK Jr says that a pharma company gave money to Trump and he canceled the commission.

This was a betrayal beyond belief because we know that Trump had someone close to him have a vaccine injury, yet, when push came to shove, he chose to shove the Vaccine commission out the door.

At the same time, state dems such as in CA and NY are similarly simply horrible.

Kim is right that we must be Switzerland on this.

No side is going to fix this for us, only our stories, told over and over, to everyone we can. And our support for Age of Autism, Children's Health Defense, NVIC, ICAN, and every place else we can help. Plus candidates of either party who see the light.

Also--talk to EVERYONE. Bernie Sanders was once a mayor of a small town in VT. He might have made it to president. Talk to lawmakers at ALL LEVELS of ALL PARTIES.

The super-cold storage is indeed a mystery. Totally impractical. How long does it take to thaw? How quickly must it be used once it is thawed? What if it isn't quite up to room temperature and is injected. Frostbite? And now I'm hearing that the first batches will be delivered to the elder care homes. No mention of the doctors. Still, Trump's HHS Secretary has NOT called for it to be mandatory. That's what counts. JUST SAY NO.

Benedetta: 94 degrees below zero. Fahrenheit scale. Kelvin scales contains no values below zero, although the CDC might offer proof that such is the case.

Not sure why the President is backing the CV19 vaccines to the extent that he is. They could both backfire rather badly by the time 100 million doses are out.

I would very much doubt that his family will line up for them, however Ivanka seems to have stated she will take it.

I will be in the un-vaccinated control group.

I am currently withholding judgement on Trump in this. All is not as it seems.

I have closely followed his tweets and ACTIONS regarding vaccines. First, the Federal government, according to the 1986 Childhood Vaccine Injury Act, must PROMOTE vaccines. Trump has done this in a very low-key manner, while emphasizing they won't be mandatory and he has continually promoted TREATMENTS, getting FDA approval, even against the Fauci swamp creatures' attempts to prevent this. The Presidential powers are not dictatorial (yet). In 2016, Trump took office with the HHS, NIH, CDC swamp creature Federal employee deck stacked against him. Remember, these people, along with the military control the L4 biowarfare research labs. Potent opposition. Also, when Trump took office, the MSM was pharma controlled (still is) and if he started firing these people en masse, the public would believe any lies told about Trump and he would be shut down. Trump had to first promote an alternative news source that was friendly to his agenda. This has taken several years.

Trump had huge pressure to purchase and promote a Sars Cov2 vaccine. Pharma had to be paid off. Instead of the 1986 Vaccine Law, this vaccine would be developed under the Emergency Powers Act, and manufacturers demanded liability protection through this alternative legal system. Once a Declaration of Emergency was declared, the SECRETARY OF HEALTH AND HUMAN SERVICES has the authority to mandate a vaccine according to the law. It appears to me that Trump used reckless WARP SPEED (which he could control) to make this vaccine STINK to large numbers of citizens, and certainly to his opponents.
They all had a "come to Jesus moment" regarding vaccine safety. I already posted one of their own documents that admitted that the WARP SPEED increased "vaccine hesitancy." To increase their angst, the initial WARP SPEED vaccine guinea pigs would be doctors themselves. Now we have huge numbers of them speaking out against this vaccine and saying they would not take it. I believe this has been Trump's goal all along, but he had to achieve it lawfully and in a manner the MSM could not refute.

Thanks to MSM propaganda and fear mongering, there are still about 50% that would take a Covid vaccine. Trump still wants another four years in the White House; if not now, then in 2024. These current tweets would appeal to them and prevent Trump from being labeled an "anti-vaxxer". Trump wants a win from those who want vaccines, and a win from those who don't. Personally, I don't think the vaccines will be mandatory as long as he is in office. If the KRAKEN win, we may still have him for another four years.

I continue to trust, but VERIFY. Healthy skepticism is good for a free Republic.

Is it true that it has to be kept in storage of 80 below? Celsius if not Kelvin.

How is the world to respond?
For the first time, those that believe in the system, believe that Putin is Trump's buddy; cause the poor down trodden, back woods guy, that never looks up from his labor did say just that to me last week; AND that vaccine ain't been tested long enough for him to trust it. In which to my pleasure I informed him that neither had the childhood vaccines, most even a shorter time..

Now what is really going on in Trump's mind? I don't know. Is it a chess game? Maybe.
If he is not elected it don't matter at all, and the game is over. It may be.

Kim, my dad said to me once in a way that stuck with me, "sometimes you have to call a spade a spade". The spades are wrecking this country, our future, our ability for life, liberty and the pursuit of happiness. I really can't tell the swamp from the trees from forest from the spades. GAFM!

I am greatly disappointed in Trump's "warp speed" program that accelerated the looming Covid vaccine to be distributed to MILLIONS of people … this vaccine is either going to prove SAFE AND EFFECTIVE over the LONG TERM … or … it will prove to be the worst decision Trump has ever made and a decision he will never recover from.

Either way … the Covid vaccine WILL be the most scrutinized and widely administered vaccine in history .. and … the "law of unintended consequences" may prove .. as the Supreme Court said .. vaccines are UNAVOIDABLY UNSAFE … which means … THERE IS NO SUCH THING AS A "ONE SIZE FITS ALL VACCINE" …

In any event .. unlike President Trump … I wouldn't want my legacy to be determined by a Covid vaccine will forever be remembered should it prove to be a GLOBAL CATASTROPHE .. AND .. PRESIDENT TRUMP MUST KNOW HE WILL BE FOREVER REMEMBERED FOR HIS "WARP SPEED' POLICY THAT CAUSED IT.