ProPublica Reports That Dr. Fauci Will Review CoVax Trial Data but Not Pfizer's 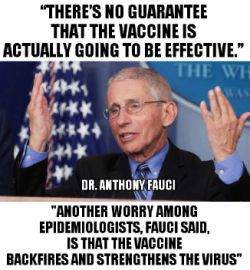 Who Decides When Vaccine Studies Are Done? Internal Documents Show Fauci Plays a Key Role.
Dr. Anthony Fauci will see data from government-funded vaccine trials before the FDA does. One caveat: Pfizer’s study, which is ahead of the others, isn’t included in his purview.

ProPublica is a nonprofit newsroom that investigates abuses of power. Sign up to receive our biggest stories as soon as they’re published.

Dr. Anthony Fauci, the nation’s top infectious disease official, will oversee most of the ongoing COVID-19 vaccine trials in the U.S., but not that of the current front-runner made by Pfizer, documents obtained by ProPublica show.

According to a draft charter spelling out how most of the advanced COVID-19 vaccine trials will be monitored, Fauci is the “designated senior representative” of the U.S. government who will be part of the first look at the results. That puts Fauci in the room with the companies — including Moderna, Johnson & Johnson and AstraZeneca — in deciding whether the vaccines are ready to seek approval from the Food and Drug Administration.

Fauci’s role, which has not been previously reported and was confirmed for ProPublica by the National Institutes of Health, could offer some reassurance in the face of widespread concerns that President Donald Trump wants to rush through an unproven vaccine. As Sen. Kamala Harris, the Democratic nominee for vice president, put it at last week’s debate, “If the public health professionals, if Dr. Fauci, if the doctors tell us that we should take it, I’ll be the first in line to take it.”

But there’s a big caveat. Fauci doesn’t have the same hands-on role for the vaccine that seems poised to show results soonest: Pfizer’s. That’s because Pfizer opted not to accept government funding and participate in the federal program to develop a coronavirus vaccine, known as Operation Warp Speed. (The government did make an almost $2 billion deal with Pfizer to preorder up to 600 million doses of the company’s vaccine, but it isn’t contributing money to the vaccine’s development like it is for other companies.)

“(We) offered opportunities for collaboration with Pfizer,” said a spokesperson for the National Institutes of Allergy and Infectious Diseases, a branch of the NIH. “Pfizer chose to conduct their Phase 3 study without Operation Warp Speed or NIH support.”

Pfizer’s CEO, Albert Bourla, said Friday that the earliest his company would be ready to apply for authorization would be the third week of November. While Pfizer might know by the end of October if its vaccine is effective, it would need additional time to gather sufficient safety data to present to the FDA, Bourla said in an open letter on the company’s website.

Fauci’s role in overseeing the companies that are participating in Operation Warp Speed arises from a unique arrangement that the government set up to monitor the trials. Typically, clinical trials set up their own independent panels of scientists, known as a data safety monitoring board or DSMB, to watch out for safety concerns or early signs of success. But all of the vaccine trials in Operation Warp Speed are sharing a common DSMB whose members were selected by Fauci’s agency, the NIAID. They’re also sharing a network of clinical trial sites where some volunteers are recruited for the studies.

A DSMB is responsible for making recommendations such as halting the trial if there is a safety concern or letting the manufacturer know that there’s enough evidence to submit an application to the FDA. Ordinarily, a DSMB’s recommendation goes to the company running the trial. In this case, the U.S. government — which gets two representatives, one from the NIAID and one from the Biomedical Advanced Research and Development Authority — will also have a seat at the table in deciding what to do next.  READ MORE HERE.

What is this none profit organization “ vaccinate your family? What ever happen to that none profit “every Child by Two”?

Did the disband it when it got reported it was being paid for by the CDC and renamed this stupid name?

What I would like to know is why would Pfizer qualify for indemnification if they refuse to be a part of the process? If you're going it alone (no government aid/support) so as to not be part of the safety studies, shouldn't they also bear responsibility for any and all subsequent injuries? I'm sure legal minds who are paid top dollar have already shot down this simplistic analysis, but it still seems wrong on many levels

As for that announcement by the WHO concerning the uselessness of Remdesivir, the official announcement of it came only with the blessings of the top tier agenda-setters like Bill Gates, who might even have some financial interest in that particular drug themselves. If they do, losing that money is just "a cost of doing business." They're sacrificing it in order to remove from the public any hope that an effective treatment is or ever will be possible. It's just a part of their strategy of fear-mongering everybody into accepting a universal vaccine or collection of vaccines to be given by mandate to every man, woman and child on the planet. And like the flu shot, a new dose will be required every year because of viral mutation.

I always like to know the bias of any 501c3 journalism entity. The founders and funders of ProPublica are quite significant. The husband and wife team have since passed away, but here is their legacy:

"Herbert Sandler, the surviving half of a husband-and-wife team who built the second-largest savings and loan and helped popularize an adjustable-rate mortgage blamed in part for the (2008) housing crash.."

"With his wife, Marion Sandler, who died in 2012, Sandler was in the vanguard of untraditional home lending. They were co-chairmen and co-chief executives of Oakland-based Golden West Financial Corp., which became the second-largest thrift in the U.S., after Washington Mutual."

"The Sandlers became fixtures on lists of the highest-paid CEOs in the U.S., and American Banker ranked them No. 8 on a list of Top 10 CEOs in 2006. As owners of a 10% stake, they walked away with $2.4 billion when Wachovia Corp. bought Golden West for about $24 billion in 2006." NOTE: this was 2 years before the housing crash.

"ProPublica, their pioneering foray into nonprofit investigative journalism, opened in 2008 (the year of the housing crash). The Sandlers funded the organization with $10 million annually. "

"The financial crisis of 2008, triggered by the collapse of the subprime-mortgage market, brought new scrutiny of the Sandlers’ legacy. Wachovia, Golden West’s purchaser, lost 89% of its market value from a high in February 2007 as a result of mounting losses on option ARMs, leading to its sale to Wells Fargo & Co., a deal that was announced in October 2008."
https://www.latimes.com/business/la-fi-herbert-sandler-dies-20190606-story.html

WITH THAT SAID...
Who better to get to report this:
"Fauci’s role, which has not been previously reported and was confirmed for ProPublica by the National Institutes of Health, could offer some reassurance in the face of widespread concerns that President Donald Trump wants to rush through an unproven vaccine."

This gets Harris off the hook for being "anti-vax" and lends support for Biden pushing a mandatory vaccine. See how it works?

Meanwhile, the New York Post's story on Hunter Biden's proven dealings with Ukraine gets BANNED from social media. Imagine that.

Fauci reminds me of "Suffer the Little Children":

Down in the heart of town
The Devil dresses up
He keeps his nails clean
Did you think he'd be a boogeyman?

What you said needs to be repeated often and often again.

Sooo, We have a bunch that was going to kidnap the governor of Michigan, but the FBI to 'em before they could perform the deed. Is this the same FBI that has held on to a personal computer full of selling out the country to China deals; since last December? Hump.

Kind of a shame they are in jail right now, for it seems there are so many needy people needing kidnapping than there are those to do the deed. I know I am verging on being really bad. If only we could get our justice department, and FBI really working for the citizens of the United States again.

Maybe who ever can fire -- Fauci; will after the election. If the right side wins.

Do I need to get a bunch of toilet paper and paper towels before every body else out buys them, again?

When this is all over Fauci is going to be as rich as Gates.

The WHO study also found that HCQ was not beneficial, when we know that it is. Maybe equal opportunity dissing.

I remember when Dr. Fauci's was holding the trial study papers for Remdesivir in a Covid task force meeting and his upbeat exuberance for "proof of concept". Gilead's stock exuberated, but now comes this:
"In a study it described as both conclusive and disappointing, the World Health Organization said the antiviral drug remdesivir has "little or no effect on mortality" for patients hospitalized with coronavirus and it doesn't seem to help patients recover any faster, either."

While the HCQ cocktail was orchestrated out of beneficial use, the shenanigans that got Remdesivir to move front and center (with the FDA's help) did nothing.
https://www.cnn.com/2020/10/15/health/remdesivir-covid-who-trial-mortality/index.html

The old saying … "The fox is now watching over the henhouse" applies .. in this case Fauci is the fox and we the American people occupy the henhouse.

When Fauci decides for us what where and when to have a vaccine, it wont apply to him family and friends..