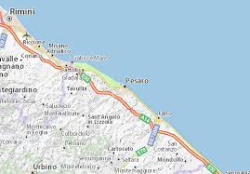 From Pesaro, Italy, east of Florence on the Adriatic sea, a protest against the new closure regulations.  Imagine the money spent by businesses to comply with Covid rules, and not, restaurants are being told to close their doors by 6:00pm, which is practically mid day by Italian dinnertime habits.  Thank you to Alina A for sharing the video and description below. You do not need to share the language to understand the sentiment.

From Alina A, who shared the video and this summary:  "In the video the restaurant owner politely but firmly tells the police contingent (10 police officers!) that he is respecting all rules and regulations. The officer in command insists that the latest DPCM (decree by the president of ministers ) calls for 6.00pm closure . The restaurateur calmly states that DPCMs are unconstitutional and he won't abide by them. He has a full house of customers and they won't leave until they are finished to consume their meal.

It clearly is a tug of war. Albeit a polite one given that there is a private television broadcasting the event.
Inside we can see that ALL customers are completely in agreement with the restaurant owner and shout:" Li-ber-ta'!
The police officers cannot enter because the number of customers is to the limit of the restaurant capacity and they would break the law if they did enter :)

Liberta' in a dish of spaghetti?

"Pesaro. It is 8.30 pm on Monday 26 October, when the police raid a restaurant where a dinner with 90 guests had been organized in protest against the launch of the last dpcm which, as we know, closes all services by 6 restaurants and bars of Italy. But the owner of the club did not give up and tried to prevent the police from entering the club with all his might by locking the door, as seen in the video of Radio Pesaro. So the police were forced to enter through a back door. All this while the guests continued their last supper (so to speak), toasting and shouting: "Join us". Once the agents entered, the restaurateur first calmly told them that he did not want to interrupt his guests' dinner and then shouted again: "You can arrest me but I will never close!".

The Italian Sons of Liberty!

Here's an update on persecution of an organizer of the prayer protest in DC last Sunday. 35,000 showed up!

This pastor was NOT INTIMIDATED:

"At the huge worship event held on the National Mall in Washington, DC on Sunday, a Satanist reportedly attacked one of the organizers.

Dr. Charles Karuku with International Outreach Church prayed for our nation, which has been torn by racial riots and discrimination, to unite and "let the healing begin!"

Afterward, he was attacked by a protester who dumped blood all over him.
"I'm gonna keep the blood-stained clothes as a badge of honor for Jesus! Pleading the blood of Jesus. This movement is unstoppable.""
https://www1.cbn.com/cbnnews/us/2020/october/satanist-dumped-blood-all-over-christian-preacher-at-washington-prayer-event?utm_source=wnd&utm_medium=wnd&utm_campaign=syndicated

Makes you wonder about the Fauci relations back home in Italy what they think of their great realtion..
The traitor should have stayed in Italy..

NEW: Fauci Emails Show WHO Entity Pushing for a Press Release Supporting China’s Response to COVID19
READ MORE HERE: https://www.judicialwatch.org/press-r...
Judicial Watch announced recently that it and the Daily Caller News Foundation (DCNF) received from the U.S. Department of Health and Human Services 300 pages of emails of Dr. Anthony Fauci, Director of the National Institute of Allergy and Infectious Diseases, including his approval of a press release supportive of China’s response to the 2019 novel coronavirus.

Thanks Alina! Love to watch the “pecorelle” (Sheeple) waking up in the homeland too! My family’s south of Pescara in the Bari area.

Lesson: Do not threaten an Italian man and his “dolce vita”. Now if only more of this attitude would rub off here in New York City ...

'Once the agents entered, the restaurateur first calmly told them that he did not want to interrupt his"guests' dinner and then shouted again: "You can arrest me but I will never close!".

Ah yes ... echoes of long ago patriot … 'GIVE ME LIBERTY OR GIVE ME DEATH"