Is Horror Film Come Play a Trick or Treat for Autism? 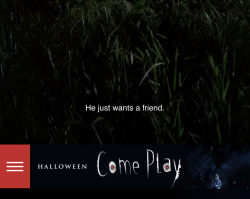 Boy: "How come Oliver gets to use his phone in class?"
Girl: "He's autistic, dude."

There is a new horror film just released called "Come Play." It features an evil creature named "Larry" who entices a boy who has autism with friendship through the child's communication device.   The boy tries to tell his parents there is "something" in their home. They do not believe him. (Horror film making class lesson one, day one "Never believe the kid.") Larry wants to be his friend.... at a steep price.

In the trailer his Mom tells the school official, "Poor guy still doesn't have any friends." I would never have said this sentence to anyone, it sounds far too glib. But I wasn't consulted for the script.  None of my daughters with autism has ever had a true friend - by that I mean a boy or girl with whom they have cultivated a relationship that continues without 100% facilitation by an adult. My daughters are adults, by the way. Still, I'll pass on Larry.

Watch the trailer, let us know if you have any desire to watch the full movie.

A terrifying new vision in horror awaits. #ComePlay is in theaters this Halloween. Newcomer Azhy Robertson stars as Oliver, a lonely young boy who feels different from everyone else. Desperate for a friend, he seeks solace and refuge in his ever-present cell phone and tablet. When a mysterious creature uses Oliver’s devices against him to break into our world, Oliver’s parents (Gillian Jacobs and John Gallagher Jr.) must fight to save their son from the monster beyond the screen. The film is produced by The Picture Company for Amblin Partners. 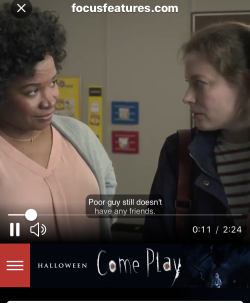 There was another movie a few years ago where an autistic child brings home possessed rocks from the Grand Canyon called The Darkness starring Kevin Bacon. The strange things that start to happen initially get blamed on the child. So many children these days have enough challenges without the notion that they are conduits for fictional evil spirits. OK, I know it’s Halloween, but this is a theme that I think should go away.

So our society is so comfortable with autism, and communication only through technology, and the lack of being able to independently form friendships that we can now be included in society as the subject of a horror film. Haven't we arrived?!? But, of course, these developmental differences have always been with us...., well haven't they?!? So how come there are no horror movies made featuring children with Down Syndrome, or with cerebral palsy, or disabilities that confine a child to a wheelchair? These are disabilities that we don't have to fake having been here before the mid 1980's. I'm sorry, but I just see this as an agenda film - a very sick agenda film!!!

Parents trying to save their son from a monster. LOL.
Something worse than autism? A brain inflammation, seizure causing illness that when they age out of parents' health insurance -- Oh for heaven sakes.

Maybe aging out of health insurance and not going to get treatment from the monster medical system is a good thing.

Let food be your medicine , but it is Halloween and sugar monster is making the rounds.

Monsters are plenty, and don't have to be something from the nether world.