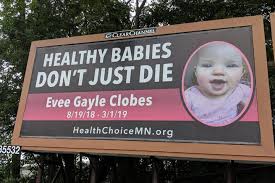 A Minnesota mother’s heartbreaking story and battle against corruption

“I want Evee’s story to be shared everywhere, so this never happens to another family," said Catie Clobes, Evee’s mother. To spread awareness and help secure justice for Evee, Catie, has shared her story on The Highwire with Del Bigtree; Minnesota families are wearing shirts with an emblem in the shape of a superman-like "E" and have bumper stickers on their cars; yard signs have been placed around the state; and more than 11 billboards have gone up sharing her daughter's memory and her tragic story of loss and corruption. Two massive boards are currently live off I-94 that state "36 hours after vaccines, Evee died, and the medical examiner lied."

More than 2,000 American infants die of "SIDS" every year, and parents are rightly questioning why their healthy babies suddenly died. More and more medical examiners are labeling infant deaths as "undetermined" to make it look like "SIDS" deaths are down, when infant deaths are rising.

When a patient dies after a drug overdose or medical procedure, tests are performed to rule out any and all causes of death. However, that is not the case when it comes to vaccines. Coroners aren’t even allowed to list vaccines as a cause of death. No family should have to pay for a private autopsy and fight against the medical examiner to discover that a liability free pharmaceutical product caused the death of their baby.

However, this is what Evee's mother did after Dr. A. Quinn Strobl at the Midwest Medical Examiner's office refused to run any of the requested tests, and performed a negligent, lackluster autopsy on the infant.

Justice for Evee, A Mother’s Heartbreak

On February 27, 2019, Catie Clobes brought her happy and healthy 6-month-old to her well-baby checkup, where the pediatrician declared her to be in “perfect health” with no problems or concerns. After Evee was examined by her pediatrician, the nurse administered the shots according to the CDC recommended schedule – 6 doses total – Pediarix and Prevnar.

The evening of February 28, Evee was unusually sleepy when her mother put her to bed on her back and checked her later that night. During the morning of March 1, Catie discovered her daughter on her back, lifeless and not breathing, and called 911. Evee was rushed to Buffalo Hospital and pronounced dead upon arrival.

On the day of Evee’s death, the Midwest Medical Examiner's investigator assured Clobes that “every test” would be performed and confirmed that the shots administered approximately 36-hours prior to her death would be investigated as a possible cause. The medical officer told her that infant deaths were taken very seriously. The CDC's mandatory Sudden Unexpected Infant Death Syndrome form even has a question asking if an infant had been vaccinated in the past 72 hours.

In the following weeks, when Clobes followed up with the Medical Examiner’s Office to confirm that necessary tests were being performed to definitively confirm or rule out injury from her vaccines, including tests to measure critical proteins, enzymes, serum levels of adjuvants, and markers for inflammation, she was told, “It’s not medically necessary, there is no medical reasoning, and it’s not medically approved," by the Chief Examiner, Dr. Strobl.

Evee’s family found this determination unacceptable in the absence of complete data and examination. With the help of fundraising started by Minnesotans and soon after, people from all over the world, Ms. Clobes pursued her second opinion with a neuropathologist who initially found a cellular infiltration in Evee's brain. She then attempted to get the rest of her daughter's tissues out of the examiner's office, and Dr. Quinn Strobl pushed back and refused. Ms. Clobes has spent over $17,000 just to get her own daughter's tissues out of the examiner's office, and to get an explanation for her daughter's death.

Months after the autopsy was complete and case closed, and just two days after Ms. Clobes asked for her daughter's remaining tissues to be sent to her private neuropathologist and for a confirmation test be done on the cellular infiltration found, Dr. Strobl found out that Clobes was pursuing a case in Vaccine Court, and she falsified findings and punitively changed Evee's cause of death to positional asphyxiation, contrary to the evidence. Somehow the case caught the eye of a writer from NBC, who created a false narrative, made up quotes from Ms. Clobes' first neuropathologist that he has since denied making, and sent the libel and slanderous piece to print for the world to see. Dr. Strobl played a part in the article.

In December of 2019, Ms. Clobes filed a complaint with the Minnesota Medical Board, including disturbing emails from Dr. Strobl revealed in a FOIA request. Dr. A. Quinn Strobl is under investigation by the medical board for her negligence in the autopsy, breaking HIPPA, punitively changing the cause of death, conspiring to defame a mother, and other unethical behavior that resulted in the Clobes family experiencing hostility, death threats on social media and in the mail, gaslighting, constant attacks and harassment. The attacks have escalated as Ms. Clobes continues to seek the true cause of her daughter's death.

A third neuropathologist's findings were that Evee definitely did not die from "positional asphyxiation,” and his theory is that she passed from a fatal seizure, triggered by a cytokine storm that was induced by the vaccinations she received.

This is not rare. The National Vaccine Injury Compensation Program has paid out rewards to families of vaccine-induced infant deaths, but as more and more cases are coming in, they've made compensation to parents incredibly difficult to win. In a recent case, the Vaccine Court’s "Special Masters" have stated that they simply can't compensate infants who have died after vaccines because everyone will stop vaccinating their babies.

"Everyone should be given true informed consent by their doctor before they vaccinate. If I had been told that vaccine-induced SIDS was a possibility, I never would have vaccinated Evee that day," Clobes said.

Ms. Clobes is currently pursuing litigation against the Midwest Medical Examiner's office, but what she wants most is for Dr. A. Quinn Strobl to lose her license forever. "There is no other level of discipline that is appropriate for what this woman has done to me and to my daughter's name. I grieve very heavily, daily, and have to endure attacks, threats and abuse along with it. People telling me I killed my daughter. Strobl did this to me and to Evee's name. Her ego was too big, and she didn't want me to pursue a second opinion or challenge her work. The unethical, spiteful moves she made to try and stop me will be coming back to bite her. No family should ever be treated like this. Medical examiners should remain impartial and unbiased, and this woman is definitely the opposite-corrupt and biased,” Ms. Clobes said.

​For more about Evee and Catie's story, interviews and recordings, visit justiceforevee.org

Phoebe Jones, I don't know what you are reading, but your comment is not related to the article above.
Thank you for keeping this post circulating! Evee's life was not less important than any other. Do you blame the victims in all cases, or just this one?

This is unbelievably tragic. Can anyone explain, though, why there was pooling of blood on Evee's chest, the front of her arms, and her face, suggesting she was laying face down? That seems really relevant.

No, I am up against idiocy, malice, naked professional ambition, greed, cowardice and corruption.

Well done Ms Clobes 100% the Drs fault for pushing untested toxic deadly vaccines,lets hope the Dr goes to jail exactly where they belong along with the other psychopaths.
Another star in the sky looking over us all god bless you Evee.

Apparently Fred is not only a troll, folks, but he didn’t even actually read the article before presumptuously commenting. There’s no evidence of such activity before the baby’s death. Even if mom had done so, however, let’s remember that “correlation does not equal causation”, right? But don’t worry! His misogynistic, blame the victim mentality only serves to create more backlash and more antivaxxers. What kind of degenerate takes schadenfreude in a parent having to bury a child, regardless of the reason?

BEHIND every doctor is a Huge -For -Profit -Pharmaceutical Corporation bowing down to the almighty dollar.

You're up against plain common sense, John.

Very grateful to you. When one sees twisted, sick comments like yours it demonstrates exactly what we are up against.

A good lesson on why one shouldn’t drink and then co sleep on a couch with an infant.

"Clobes was informed that vaccines are not a “medically accepted” cause of death, nor does a code exist to classify them as a cause of death"

I researched death statistics in Minnesota for a year when a baby was killed by the MMR vaccine (and his death by MMR was conceded in the National Vaccine Injury Compensation Program) and of course, there was no category listing of "death by vaccine".

This little boy's tragic, avoidable death was lumped in a vague "undetermined" category - where I'm sure baby Evee's death would have also been relegated if her mom were not such a warrior.

"Ms. Clobes is currently pursuing litigation against the Midwest Medical Examiner's office, but what she wants most is for Dr. A. Quinn Strobl to lose her license forever. "There is no other level of discipline that is appropriate for what this woman has done to me and to my daughter's name. I grieve very heavily, daily, and have to endure attacks, threats and abuse along with it. People telling me I killed my daughter."

"In a recent case, the Vaccine Court’s "Special Masters" have stated that they simply can't compensate infants who have died after vaccines because everyone will stop vaccinating their babies."

Obviously the SPECIAL MASTERS have abandoned the reason for their existence .. which was to hold accountable vaccine manufacturers for injuries CAUSED by their DEFECTIVE PRODUCT .. instead .. they have taken the position of PROTECTING THOSE DEFECTIVE PRODUCTS by denying parents JUSTICE for the injuries inflicted upon their most precious possessions .. the INNOCENT, PERFECTLY HEALTHY CHILDREN.

The absolutely LAST thing special masters want to do is APPROVE OF VACCINES THEY KNOW ARE KILLING INFANTS … without using all means at their disposal to GUARANTEE VACCINES ARE INDEED .. MANUFACTURED AS SAFE AND EFFECTIVE AS OUR INNOCENT CHILDREN DESERVE.

When is CONGRESS going to act to stop SPECIAL MASTERS from denying parents justified compensation for vaccine injuries to their children … rather than allowing them to continue PROTECTING THE VACCINE INDUSTRY FROM BEING HELD ACCOUNTABLE/RESPONSIBLE FOR ANY CHILD WHO DIED AS A RESULT OF THEIR DEFECTIVE PRODUCTS????

SHAME ON ALL INVOLVED IN THIS ONGOING BLOODY ASSAULT ON THE HEALTH OF OUR CHILDREN!!!!

Billboards are mightier than the sword.