Elon Musk Says No CoVax for His Family 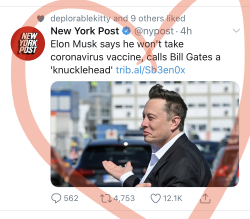 Knucklehead definition, a stupid, bumbling, inept person. Knuckleheads, however, are what fans of The Three Stooges and the merchandise store are called. NJ Governor Phil Murphy called those who violated the lock down orders knuckleheads. It's a funny word, coined by funny men almost 100 years ago (they created comedy from 1922 - 1970!)  And the word adds a bit of levity in an otherwise very heavy world.

Tesla, Space-X founder Elon Musk says no to a CoVax. And calls Bill Gates, "a knucklehead," which is a lot nicer than the exchanges at the election debate. Quaint even. Musk is the 4th richest man in American and quite a bit younger than 65 year old Bill Gates at 49 years old. Whom do you trust to help plan YOUR future? Business Insider took a look at the "feud” between the two tech giants:
Elon Musk called Bill Gates a 'knucklehead' for criticizing his coronavirus response. Here's where their simmering feud began and how it's escalated amid the pandemic.

SpaceX founder Elon Musk stirred the pot yet again after claiming that neither he nor his family would take a COVID-19 vaccine even if it was readily available.

The 49-year-old billionaire dropped the bombshell during a Monday appearance on the New York Times opinion podcast “Sway.”

“I’m not at risk, neither are my kids,” Musk told host Kara Swisher about the rationale behind his decision.

Unpredictable dilemmas might be big trouble for the passengers https://airlinespolicy.com/flight-change-policy/qatar-airways-flight-change-policy/>Qatar Airways Flight Change Policy states that you can make different amendments like the name change, seat change or travel dates, or destination. The airline is always ready to help such passengers who are stuck in situations.

Kenya Airline flight, Just amazing — they’ve never been late for me, but Kenya Airways Cancellation Policy is a little bit difficult to understand. After searching so much about modification policy, finally, I got a solution by {Airlinespolicy.com }. They have crisp, short, and relevant information about modification, cancellation, check-in, Baggage, and Pet policy. They helped me a lot during the harsh Covid-19 time. I am very thankful to the team of airlinespolicy.

Nice post! I remember when I was a student, I used the service http://essaylab.co.uk/ - this site is perhaps the best thing that happened to me in those years, because it is incredibly convenient! See for yourself :)