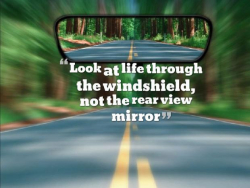 Note:  Below is a letter sent to the New York Times by disability community voices in response to the "cancel culture" that those with more severe behaviors and challenges (and their families) face.  We have been excluded from mainstream disability conversations forever.  A prime example, and ironic, is that we were not contacted to participate in this letter, and yet, ignoring us has not helped them make any gains with The NYT.

That being said, the overall message is applicable to the Age of Autism Community.  We are being left in the dust, "objects in mirror are closer than they appear" without services or even a willingness to acknowledge the severity of challenges. Even with some advocates trying to shut down housing options. And Lord knows the medical industry is wholly untrained for patients with autism related issues.  Personally, I'd like to thank John Robison, a friend of mine for many years now, for standing up for the rights of people like my three daughters.

There are times when you have to bail the boat together, and then choose which side to row on after you're afloat.

The following letter was sent to The New York Times on behalf of 75 organizations and leaders in the disability community in response to the paper’s editorial choices omitting serious issues facing those with significant intellectual and developmental disabilities.

The following letter was sent to The New York Times on behalf of 75 organizations and leaders in the disability community in response to the paper’s editorial choices omitting serious issues facing those with significant intellectual and developmental disabilities.

July 26th marked the 30th anniversary of the signing of the Americans with Disabilities Act (ADA). To honor this unquestionably historic legislation, The New York Times has published over two dozen articles over the past few weeks celebrating disability. But with the exception of a brief mention in an article on caregiving, those with significant intellectual and developmental disabilities were notably absent from the Times’ coverage.

People with disabilities who win Academy and Tony awards, lobby Congress, and shape a new variant of hip-hop music absolutely deserve to be honored, as the Times did in its supplement dedicated to the ADA. But that isn’t the whole story. The whole story would include those whose profound intellectual and developmental disabilities preclude the autonomous decision-making, independent living, and competitive, minimum-wage employment that are the cornerstones of the Disability Rights movement. And it would also acknowledge that, in their zest to eliminate the specialized supports that don’t comport with this vision, advocates are doing exactly what Justice Anthony Kennedy feared would happen, when he wrote in his concurring opinion to the Olmstead decision referenced by the Times as a landmark in disability history: “It would be unreasonable, it would be a tragic event, then, were the Americans with Disabilities Act of 1990 to be interpreted so that States had some incentive…to drive those in need of medical care and treatment out of appropriate care and into settings with too little assistance and supervision.”

Our community’s absence from your coverage was not for lack of trying. Several prominent voices submitted responses — either to individual pieces or to the Times’ request for contributions from the public. Not one of these was published. Some excerpts:

From John Elder Robison, autistic self-advocate and Neurodiversity scholar, the College of William and Mary; Neurodiversity Advisor, Landmark College: “In her essay [“Dear Parents: Your Child with Autism is Perfect”], Ms. Ryan writes: Your child might be verbal, nonverbal, aggressive, passive, introverted or extroverted. It doesn’t matter. It troubles me greatly to see those words published in The New York Times. I have represented the autism community before the federal government for 10 years. In that role I have talked to thousands of parents and even more autistic people. My experience has shown me how diverse the autism community is. It has also shown me something else: If your child is nonverbal, passive, or aggressive, it most certainly does matter.”  Read more Dozens of Disability Leaders Decry Cancel Culture at the New York Times

I just stumbled upon this.

Has anyone heard of Unicorn Children's Foundation?

Evidently President Trump has been involved with this 501c3 and has received an award from them.
https://www.thegivingtrump.com/wp-content/uploads/2019/02/trump-shining-star-award-charity-children.jpg

"Who is Unicorn Children's Foundation?
Unicorn Children's Foundation is an international non-profit organization dedicated to children and young adults with developmental, communication, and learning disorders through education, awareness, and research so that they have every opportunity to lead productive and fulfilling lives.Unicorn Children’s Foundation was founded in 1994 by Mark Rosenbloom, MD shortly after his three year old son was diagnosed with a severe communication disorder. Up until that time, he had been told by numerous professionals that his son, who was not yet speaking, would "grow out of it." But he didn't.
As a result of one misdiagnosis after another, many months of valuable therapies and intervention were lost. Out of his pain and frustration, and a wish to provide hope for all families with children who suffer from a developmental, communication or learning disorder, Unicorn Children's foundation was born.
Unicorn Children's Foundation’s key initiatives include: promoting early identification of symptoms associated with ADHD, autism, bipolar, dyslexia and other learning disorders; developing and disseminating worldwide ground-breaking and extensive evaluation and treatment guidelines; fostering communication and collaboration between parents, professionals and policy makers to promote learning and increased awareness; and to provide adequate tools and resources to better meet the needs of our beneficiaries." https://www.unicornchildrensfoundation.org/mission.html

They also have an academy in Florida:
"Unicorn Village Academy is uniquely designed with the necessary, built
in supports for students unable to succeed in a typical school setting.
Students with neurodiversities, ages 13 – 22 plus, receive individualized
academic support and vocational training."
https://www.unicornvillageacademy.com/

You all realize what this means, don't you? It means that, except for occasional platitudes about neurodiversity, the New York Times will henceforth ignore autism. The enormous burdens that autistic people face will be ignored, as will the lack of services they face after aging out of the system at 21. And when autism advocates wrote to the Times in protest, they too were ignored. Autism was a big issue in the 2008 presidential campaign, but this time around both parties are ignoring it. It won't matter whether you are antivax or provax (and all the signatories of this protest letter seem to be in the latter camp), either way, if you raise the issue of autism, you will be treated as if you -- and your autistic children -- don't exist. Some years ago Andy Wakefield predicted that the autism generation would ultimately be abandoned by the larger society: now we see it happening.

Whenever you hear someone talk grandly about "inclusivity", think about whom they're excluding.

Do you people realize that many with so called "High Functioning Autism" have life threatening medical problems and severe mental illnesses? I DO. I have Neurofibromatosis(look it up) a life threatening nerve tumor disease that almost no one lives past 60 with that is in additions to "Asperger's" syndrome. There are others with 'Asperger's" syndrome with other mental illnesses and life threatening medical problems. It seems like Age of Autism does not care about that group just those with severe intellectual disabilities. "Disability" is a legal and medical definition that is not just a term reserved only for those with paralyzed limbs or severe mental retardation.

“[Cancel culture] is blatantly apparent in the world of autism and developmental disability, where if it isn’t a perfect or magnificent gift, we don’t want to hear about it, and certainly don’t want to address it or consider change, even when lives are at stake.”

Stealing a premise … from Orwell's Animal Farm .. rephrased to address our "CANCEL CULTURE" for modern times … as Orwell would possibly write today … ALL DEVELOPMENTALLY IMPAIRED PEOPLE ARE EQUALLY WORTHY OF OUR COMPASSION AND AWARENESS .. BUT … SOME DEVELOPMENTALLY IMPAIRED PEOPLE WHO ARE GIFTED WITH AUTISM ARE MORE WORTHY THAN OTHERS LESS GIFTED.

This letter is sadly particularly relevant after the recent tragic death of the first signator, Feda Almaliti, and her son.