The Hill Reports on CDC "Coup" 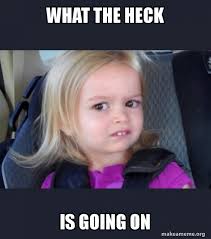 I fully believe there are those at the CDC who do not give a rat's ass about our health. From the top on down. The autism epidemic is an example that is in your face, in our schools, under my very own roof proof of their blatant disregard.  COVID is as much a political opportunity as any "war." Our nation is in alarming disarray.  The nattering nabobs of negativism have taken over.

The top communications official at the Department of Health and Human Services (HHS) accused career government scientists of plotting against President Trump and told Trump supporters to arm themselves ahead of the November presidential election.

In a Facebook Live video on Sunday, HHS Assistant Secretary for Public Affairs Michael Caputo said the Centers for Disease Control and Prevention (CDC) was harboring a “resistance unit" to Trump, The New York Times reported.

The career scientists "haven’t gotten out of their sweatpants except for meetings at coffee shops” to plot “how they’re going to attack Donald Trump,” Caputo said, according to the Times. “There are scientists who work for this government who do not want America to get well, not until after Joe Biden is president.”

Yes, I had already formed a poor opinion of Governor Murphy.

It sounds good to me too, John. But Gov. Phil Murphy, of the neighboring state of New Jersey, has told Judge Stickman that his writ doesn't run here. In effect, Murphy has said that we don't need no stinkin' Bill of Rights.

"The liberties protected by the Constitution are not fair-weather freedoms -- in place when times are good but able top be cast aside in times of trouble.”

Continued from below, Bob is right.
It ain't about my other post at all.
They want to rule the country and the world. Not some federal agency -- they want it all.

Bob Moffit you are understanding this better than I

I was just muddling along thinking why don't they care that all the auto immune diseases are sky rocketing and health services are basically unattainably.

Example the University of Kentucky had a neurology doctor's appointment over the computer. "Yeah, I said over the computer - tella health." Where in we talked to a female doctor from China that barely understood us and we her.

All we wanted was to go off the medicine and they be there in case. But the head of the department came in at the very end and said that to do that; we had to come in for an over night EEG and an MIR. Talking that 10,000 dollar crap again .

The appointment cost I though 258 dollars, but they took off 58 dollars and thus 200.

That was reasonable I thought. But then there was another bill that came in for 458 dollars, but they knocked it down to 358. I called to see what the heck!?

Oh the 200 dollar bill was mailed out by mistake, a lot of people are calling in about that bill. To me that was the right one, and the other one for 358 dollars is the wrong one.

HE has taken a leave of absence. He said he was un well. He has apologized.

; I don't want to live like Mad Max. I want a sane country back.

Would it be so bad that we actually arrest people for sedition, even if they are in high places?
Fauci making the corona virus so available, and putting it with in easy clutches of the Chinese communist party, plus supplying additional 3.7 million dollars for them to work on would be sedition?

Public hanging might not really be so bad after all.

Thank you for the link you posted...excellent and important article!

The President could shut down the vaccine industry by bringing out Dr. Fauci and asking him a few questions about the MMR vaccine, Dr. Thompson, Simpsonwood & a few other items.

I would doubt that the President has flipped on his vaccine stance, one has to go along with pharma at the moment who are paying for ads for a number of those he wants to see in Congress next year.

Put that in your pipe and smoke it.

This is a great fact-based article to study and spread around like the flu.

The manufactures and the CDC are aware of this, and are still not backing down on their insistence that people be vaccinated every flu season.

It's genocide pure and simple.

The Wash Po reported on the many war games it has conducted to see how this is going to play out. The only peaceful one is if Biden is elected in a landslide. Perish the thought. If Trump wins, and as Harris (of the threatened Harris administration said), the riots will never stop and they shouldn’t ever stop. We’ll see how many go along with that.

Apropos of this, federal judge William Stickman IV (a Trump judge) has just handed down a decision that might prove very favorable to us: he struck down the emergency powers that Gov. Tom Wolf used to lock down the state of Pennsylvania. "The liberties protected by the Constitution are not fair-weather freedoms -- in place when times are good but able top be cast aside in times of trouble," Judge Stickman ruled. Gov. Wolf had argues that his dictatorial powers were justified by the 1905 Jacobson precedent, which has been used to uphold vaccine mandates, but Judge Stickman argued that "Jacobson was decided over a century ago. Since that time, there has been a substantial development of federal constitutional law in the area of civil liberties. As a general matter, this development has seen a jurisprudential shift whereby federal courts have given greater deference to considerations of individual liberties, as weighed against the exercise of state police powers."

It strikes me that this gives us considerable legal leverage to push back against vaccine mandates as well as the whole array of authoritarian diktats that have been imposed in the era of Covid. I don't expect Jacobson to be overturned, but the courts might respect the original intent of the decision: it permitted compulsory vaccination in a real health emergency where the penalties for noncompliance were minor, but the Supreme Court explicitly said it was not giving the government a blank check to mandate any vaccines it wanted to mandate.

The SWAMP is lying in wait for coming election .. no bigger component of the SWAMP than our career bureaucrats in our public health agencies … FDA, HHS, CDC, NIH, on and on .. just like our media today .. NONE OF THESE PUBLIC HEALTH AGENCIES CAN BE TRUSTED … NONE