National Medical Association Members Question CoVax But What About MMR 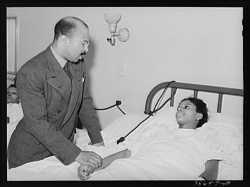 We can't help but wonder if the members of the National Medical Association, a group formed in 1895 by and for Doctors of Color,  are aware of William Thompson's information regarding the CDC and their willful altering of data to mask  the autism rate among African American toddlers based on age at which MMR was administered?  Perhaps this is a good time to reach out to them.

In June, we posted an article about Melinda Gates' announcement that African Americans should be among the first to receive the Covid vaccine, and traced her Southern, white experience in a high school that retained "slave day" as a jovial fundraiser 100 years after slavery was abolished.   Read The One In Which Melinda Gates Bestows COVID Vaccines

"The slave trade became legal for one last time ... as the Senior class members sold themselves along with thirteen brave and courageous teachers," the caption read in the yearbook, titled Acres. Two white students who darkened their skin appear in photos on the page." NBC Dallas on Melinda Gates High School Yearbook from 1979. She was a Freshman that year.

As trust in federal health agencies has withered over the last few months, a group of Black physicians has been working on an antidote: creating their own expert task force to independently vet regulators’ decisions about Covid-19 drugs and vaccines as well as government recommendations for curbing the pandemic.

Organized by the National Medical Association — founded in 1895 as an answer to racist professional societies excluding Black doctors — the committee is meant to safeguard against any unscientific guidance from the Centers for Disease Control and Prevention and the Food and Drug Administration.

“It’s necessary to provide a trusted messenger of vetted information to the African American community,” said Leon McDougle, a family physician and president of the NMA. “There is a concern that some of the recent decisions by the Food and Drug Administration have been unduly influenced by politicians.”

Just one of the examples he gave was the agency’s go-ahead to use hydroxychloroquine against Covid-19 even though there was no reliable evidence that it worked, and some indication that it could cause heart damage. The FDA later back-tracked and revoked the authorization.

McDougle frames the new task force as a way to address the suspicion that has sprouted up around Covid-19 vaccines. Some worry that, in being developed at “warp speed,” the shots might not be safe or properly tested before they’re approved, and the anxiety is only heightened for those who’ve been alienated by the medical system. That’s part of the reason that certain patients of color are especially wary of taking part in the clinical trials — and those concerns may well persist even if adequate studies are done and a vaccine hits the market.

“I think this will help to increase uptake in the African American community, if members of our task force give it the green light,” McDougle said. But he emphasized that their stamp of approval would come only if data show that the vaccine is, in fact, effective and safe.  Read more: Not trusting the FDA, Black doctors’ group creates panel to vet Covid-19 vaccines

"That’s part of the reason that certain patients of color are especially wary of taking part in the clinical trials — and those concerns may well persist even if adequate studies are done and a vaccine hits the market.

“I think this will help to increase uptake in the African American community, if members of our task force give it the green light,” McDougle said."

Good catch. This is the REAL reason for their action; Pharma is running out of vaccine guinea pigs. Who funds this group? As for their non-action regarding the known CDC MMR vaccine case study FRAUD, well, "silence is violence."

Let's assume there will be individuals on the NMA who are learning about the vaccine approval process for the first time ever in preparation for evaluating the safety data from COVID-19 vaccine trials. Let's share information with them about the inadequate safety assessment systems that have been used to approve ALL VACCINES (lack of true placebos, lack of long term studies post-vaccination, the failings of the VAERS database, etc.). Perhaps they will be shocked by what they learn and inspired to address the safety of all vaccines.

What ever I experienced in my garden back in Oct of 16; with an unexplained rush of feelings beyond anything I have ever experienced and just the feeling that there was great significance, and symbolism of black widow spiders under every hollow indention under my flat Cinderella pumpkins. Then a few days later a letter coming out to the public called: Scientists Preserving Integrity, Diligence and Ethics in Research”, or CDC SPIDER.

There are things at work that are bigger than ourselves.

Oh and I lost my seeds to those pumpkins three years ago. Mice got into them and ate them. I bought one similar to the variety I lost at Trader's Joe yesterday, that and pumpkin flavored bagels.

My hubby went to the doctor yesterday. It is a pain clinic. Mitochondria disease is painful in the muscles. They have had three doctors that over dosed over the years working at this place and died.
They almost killed my husband too with too much pain medicine. I am not saying in the beginning is was not my hubby fault and as time went on, and my daughter and myself contacting them and begging and threatening, it was their fault. There was a time we had to fight for his life with them. Then he got a new woman doctor. She apologized to us both that we had suffered through medical addiction for so very long with out help. We both really like her. My husbands sees her once a year.
I feel safe with her, so I spend my time going to a very near by Krogers and getting a few gluten free --- quick stuff. I am tired of making own slice bread, and some people can do flour tortillas in a blink of an eye but not me.

I returned to the office, but my husband was still doing hard time there. So he told me to go ahead and go across the street to Trader's Joe. We have never been, and we both thought we would go together. Pumpkin spice is - well -- they even got pumpkin spice cheerios.

Anyway; I returned and my husband came right on out, perfect timing.

He handed me a piece of paper and said the doctor said to look this guy up on the internet and listen to him. It had Zev” Zelenko written on it.

He said the doctor said, Bill Gates and Fauci was roommates in college, and they won't release the study of all the lupus patients on hydroxychloroquine, and how they did with covid 19.

Back to the book of Revelations for me and I do rejoice; For she is one more pure droplet into the glass sea mixed with fire, that stand beside the dark sea and put down the beast. .

Kim asks:" "We can't help but wonder if the members of the National Medical Association, a group formed in 1895 by and for Doctors of Color, are aware of William Thompson's information regarding the CDC and their willful altering of data to mask the autism rate among African American toddlers based on age at which MMR was administered? Perhaps this is a good time to reach out to them."

I think it all but impossible the National Medical Association is UNAWARE OF DR WILLIAM TOMPSON'S INFO REGARDING CDC AND THEIR WILLFUL (CRIMINAL!) ALTERING OF DATA TO MASK THE AUTISM RATE AMONG AFRICAN TODDLERS.

"Even before the Trump administration, he knew his patients didn’t have much faith in government. They trusted him, their doctor, and he was their source of evidence-based advice. But as he saw agencies making decisions that seemed more motivated by politics than by data, he realized his own faith in the official vetting process was shaken."

If Dr Thompson's public admission of the CDC's falsification of critical data and his admission of having participated in it was not enough for Dr Hood to organize a determined effort to expose CDC for what they have done to the African American children .. I DON'T KNOW WHAT IT WOULD TAKE??? Instead .. CRICKETS so far .. which clearly indicates Dr Hood is either UNINFORMED or INCOMPETENT to be TRUSTED for his "evidence-based advice".

I actually count 4 maimed by it that we potentially know of .
Dr Elisa Granata has disappeared without trace - no matter what they say
In June one guinea pig came down with MS
August we had a case of traverse myelitis
And now a fourth case and this is being censored everywhere

AIER reports that the following letter has made an impact on public health authorities not only in Belgium but around the world. The text could pertain to any case in which states locked down their citizens rather than allow people freedom and permit medical professionals to bear the primary job of disease mitigation.