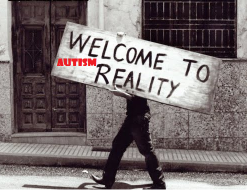 Sofia is one of more than one million young people in the UK with special educational needs and disabilities, or SEND.She’s among one fifth of young people with SEND who have the most complex needs.

During lockdown, while schools closed to the majority of children, the government said that the most vulnerable, including those with complex special educational needs could still attend.Families speaking to Panorama say they've found accessing support difficult and that it was an example of the long-term struggles they have faced getting educational support for their children during lockdown.

Of course the BBC completely misses the BIG PICTURE HERE: They are showing us the ugly side of autism, namely out-of-control children with severe behavior issues.

We see several autistic children who have meltdowns and the parents who have to deal with this daily.  A girl is described as "nonverbal," --another word in the modern lexicon that we're all getting used to like "on the spectrum," and "high functioning."

The BBC's message is that these kids have not been served during the lockdown over COVID. If government had only done their job and provided something for these children, all problems would disappear.

Wait a minute. What are these same kids like in school?  Why is it that back in 2015 the big news out of Britain was the announcement that the government would be opening 27 new special needs schools in England.

These schools would serve 2,000 students. Of the 27 schools, 22 would be specifically for children with autism.

It was all good.

Unfortunately 27 schools weren’t enough, so because of “increasing demand” more had to be done.

Now in 2020 we learn that 37 new special schools are will be built with 49 more schools in the planning stage. These schools are for kids exactly like the ones in this broadcast, or as the British press describes them ad nauseam, "children with social, emotional, mental health issues and autism."  These are kids who can't attend special ed classes in regular schools.

AUTISM is what the BBC usually tells us we should celebrate come April and declares a complete mystery every time the rate takes yet another leap upwards, just like all the mainstream print and broadcast media in the U.S.

AUTISM is NEVER THE PROBLEM. These children are a normal and acceptable part of children everywhere. Tough luck if it's your bad genes that resulted in this type of child.

This is the idiotic message from the BBC et al.: Autism is here to stay—we just need to have more support. This brief look at autism and how it affects families should scare everyone watching it.

Thank You Anne Dachel ,
Families of Severely Disabled schoolchildren in the UK set adrift .
Is Not nearly descriptive enough? and has been being going on for decades !
Care in The Community 1990
Caused carnage for families and individuals with learning disabilities and other mental health needs .
The project I was seconded to for one year ,had two deaths and an outbreak of shegella dysentry within 6 weeks '
Total disaster .
I got really good support from RCN [Royal College of Nursing ]
I got really good support from the NHS
"I was pulled out of that project before you could say "Jack Flash"

RE: Thrive
It is not a taurus but a sphere. A Buckminster Fuller student brilliantly explains/ illustrates in his book, WHOLEMOVEMENT: FOLDING THE CIRCLE FOR INFORMATION By Bradford Hansen-Smith.

You might also find this book interesting: IN THE BEGINNING WAS INFORMATION by Professor Verner Gitt. https://www.goodreads.com/author/show/36388.Werner_Gitt

I have studied the West's true economic history for years. The video presents truth AND error. Be careful.

My children were vaccine injured from the very first wave- 1987. Affected families were fewer in numbers and most were completely ignorant of what had happened to our children. I was unaware that my children had been given a brand new untested vaccine schedule with increased numbers of vaccines. As an older mom, it had no comparison with my own vaccine experience. I had no help with my children because there was NO help. Doctors were just as ignorant- by design. The lockdown experiences of the featured UK families is all I knew. Add to that, the ignorant judgement of friends, family, and Sunday school workers who just thought I lacked good parenting skills. Speech therapy and vision therapy was all paid out of pocket. We have always lived on one income because I could only deal with and help my children by home schooling. There were NO programs available in public or private schools. My children were 24-7 for years. I can relate to the woman who said she didn't have time for a cup of tea or BREATHING. Just watching the video brought back some very bad memories. BUT, I was not alone. I had Jesus. My daily prayer was, "Help me Jesus," because I didn't have time for a longer one. And He did.

I haven't watched the mainstream TV for the past, must be 14 years plus I have not paid a license. but I get the spin being told Ann thank you a great article. I just hope with the COVID malarkey that more people will question what they are being fed. My son has been finished with school now for 4 years and we have no respite package for him as the methods used does not cover his needs etc. Makes me wonder when breaking point arrives what are they going to do and say-probably not a lot. There can't be a politician or an elected official in the country who hasn't been written to and told the horror stories of autism and lack of services but still we see zero help coming from any letters sent. They are being controlled and answerable to much greater powers than just the elected. Where there is no love there is evil -evil is where there is no love.

I come across people everyday that are brainwashed to believe that Autism is genetic or due to "Better Diagnosing." A boy rocking back and forth with no speech while throwing a desk through an elementary school window would NOT have gone Undiagnosed 25 years ago. They would be on him or her like a Tsunami. Here is the Real Definition of what AUTISM is. It's when the Brain Stem Swells as a result of Neurotoxic Aluminum, Cancer causing Formaldehyde, Peanut oils leading to Anaphylactic Shock and other chemicals that are shot into infants and children. Parts of the brain die while other parts become overly aroused. If all the parts die the child will pass away from SIDS-Sudden Infant Death Syndrome of which 79.4% had a vaccine That Day. When parts are overexcited and parts stop functioning you see the bizarre behaviors because the different parts can no longer communicate with each other. This is a result of Regan passing a law that gives Permanent Immunity to the vaccine industry in 1986 when he was pressured to protect them from lawsuits as he was emerging into Alzheimer's-something that might be mirrored into todays politics.

How do these people who know what has happened to our children and pretend otherwise … SLEEP AT NIGHT??? Where is their COMPASSION FOR OUR CHILDREN???

Stay with it , the first half hour was not to my tastes !