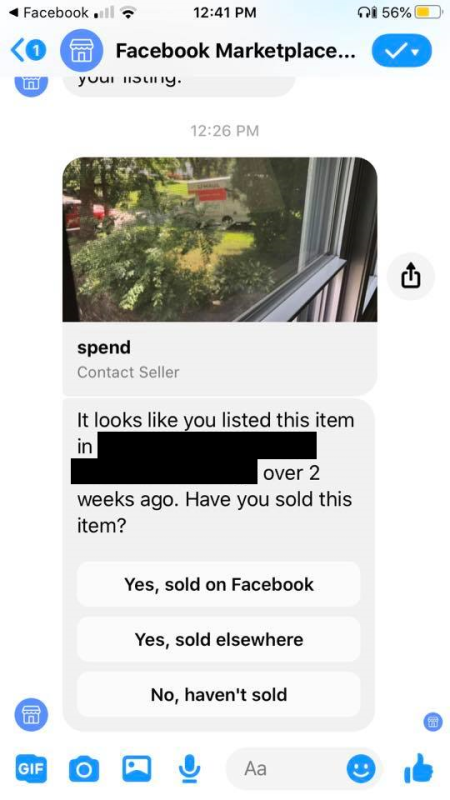 I've been thinking about Age of Autism, our relevance, our place in the community, our perceived value (or lack of value) the importance of longevity and history versus some of the shinier kids on the block with full staff and fat budgets.  Agonizing over it all,  as we approach our 14 anniversary in November and our 4th year without Dan Olmsted in January. I had been thinking about how to shift what we look like, what we do, how to use the social media base - for faster, up to the minute, 2020 ADHD snippet style reporting. As a one woman shop, which is what we are for all intents and purposes, I'm trying to find ways to bring readers a consistently valuable product.  And then I saw the above photo in my Facebook messages.

A couple of weeks ago, I snapped a photo of a U-Haul in my neighborhood, and posted it in a PRIVATE group, saying I hoped the new neighbors were tolerant yadda yadda, autism, yadda. A PRIVATE group. One photo.

Yesterday, I got this message asking if I had SOLD the item I had listed in marketplace. I did not list anything in marketplace. The moving van must have triggered a bot-ish thing. The photo was in a private group. I 'm not naive. But this blew me away.

I've heard we're about to see a new Facebook layout, some folks are already in a beta version, and they all seem to hate it. Then there's been a memo from FB saying there's a major change coming on October 1st - that makes it sound like they can just delete posts nilly willy if their "fact checkers" don't like them. Just in time for the COVID vaccines, yes?

I think AofA will try to continue along in its current iteration - a little engine that can blog in a lopsided social media world. Especially under the watchful eye of SUCKerberg.

I’d like to tell you a little joke about covid-19 Only you probably won’t get!

If it aint broken dont mend it Kim..doing a great job many thanks

Yeah, I saw that things are a going to change come Oct. on Face book
Not for the good it seems

Blogs are safer, especially if you have your own server, but nothing is totally secure

You might use twitter to link to your blog articles to get more hits. They do a bit of censoring as well, but at least your content is unaffected

I'm moving from Facebook to wimkin, it is supposed to be uncensored. So far I actually like it better than fakebook.

Ha! I do remember that day well, John! As I recall, lots of us (myself included) learned that we don't adapt to change quite as well as we like to think we do! ;)

Only we changed the format for technical reasons in 2016 - some readers were bothered for 5 minutes and then I suspect forgot. As ever it is the content that matters and I am sure Kim will make brilliant choices.

Oh, Kim, I certainly hope you choose to stick with the 'classic' AofA! I do not use any social media due to invasion of privacy issues and I'm sure there are many more like me. And I predict our number will only continue to grow as more and more people realize what is going on behind the curtain.