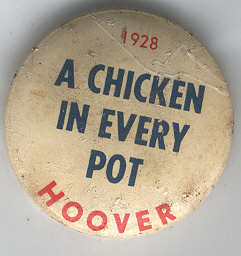 Pardon the paraphrased headline, 92 years after the original Hoover slogan....  Below is the CNBC version of yesterday's announcement. Brings to mind another famous ad campaign... "Some new cereal. Supposed to be good for you. You try it.  I'm not gonna try it. YOU try it...."  Ironically named: LIFE.

President Donald Trump said Friday the U.S. will manufacture at least 100 million coronavirus vaccine doses before the end of the year with enough to inoculate every American by April

“Hundreds of millions of doses will be available every month and we expect to have enough vaccines for every American by April and again I’ll say even at that later stage, the delivery will go as fast as it comes,” Trump said at a White House press briefing.

Pfizer and Moderna, frontrunners in the race for a Covid-19 vaccine, did not immediately respond to requests for comment.

Trump’s forecast is at odds with the head of the Centers for Disease Control and Prevention, who said earlier this week that the U.S. wouldn’t start vaccinating people until November or December at the earliest and the doses would be limited at first. CDC Director Dr. Robert Redfield said a vaccine wouldn’t be widely available until the summer or early fall of next year.

“If you’re asking me when is it going to be generally available to the American public so we can begin to take advantage of vaccine to get back to our regular life, I think we’re probably looking at third ... late second quarter, third quarter 2021,” he told the U.S. Senate Appropriations subcommittee on labor, health and human services, education, and related agencies on Wednesday.

Trump said Friday that “massive amounts” of the vaccine “will be delivered through our great military and the general is one of our best and he’s ready to go.”

“We are again very advanced on the vaccine, we think that sometime in the very near future we’ll have it,” he said. “We’re... I would say I think I can say years ahead of scheduled what it would be if it were an administration other than this one.”   Read more Trump says U.S. will manufacture enough coronavirus vaccine doses for every American by April.

Beware of the "barra boys" medical mercenary merchants, want to stack them "barras" wide and high!
A mouth for every morsel and square of a bar of chocolate ?
Or will they be offering psychedelic flavour ,self- licking lollipops as a complementary free gift instead ?

IT IS REMARKABLY RELEVANT!

I would like to easily get hydroxychloroquine now, these coming few months as it peeks in the midwest!

By spring it has mutated and all gone, so saline vaccines, chasing it down with a bottle of hydroxychloroquine.

There are a lot of things researchers should compare, and I hope they will. But one possible problem is that they were saying that recovering from a cold-type coronavirus at most gives you immunity that only lasts a short time, after which you’re vulnerable to getting it again. They had said there were four human coronaviruses and three from animals, but I think all of them originated in animals at some point. They were saying that vaccine immunity might last only a short time, and people might have to get boosters every six months, maybe every year. Maybe only children get immunity from cold-type coronaviruses, because maybe it wears off in two or three years, explaining why many adults are vulnerable to it. I had read that it was difficult to test for t-cell immunity, but don’t know how hard or how reliable such tests are. Wouldn’t elderly people have the most preexisting immunity from many years of potential exposure to other coronaviruses? But they are the most vulnerable. They seem to keep their immunity to measles, diphtheria, etc.

Even in the biggest hotspots, the vast majority of the population didn’t get cv the first go-round. Do those who did seem to be protected now? A year or five years from now? It may be that even having antibodies or t-cell immunity isn’t that protective.

And the case number are a fraud

Seems to me if Oxford are going on about their T-cell response and they haven’t compared it with placebo, or general response in the population that it is a false claim.

I just read the Doshi article again. I don’t think, based on what it contains, that fraud is an appropriate concept here. Many assumptions are made assuming that reactivity, antibodies, t-cell immunity, lasting immunity from exposure, and so on, are essentially the same for Covid as they are for other diseases, but even Doshi says that traditional assumptions about antibodies don’t seem to apply here. Maybe all the vaccines will be ineffective, more harmful than most vaccines, or both. But at this time I don’t think we can know.

John, thank you for that great link (not to mention all the amazing work you do). Peter Doshi put a lot of information together there very well. I too, think that the implication of this would be fraud, but when has that ever stopped them?

Kay, I think I remember hearing/reading that it was ICAN that pushed for that and succeeded. I believe this condition was then put upon Moderna by some regulatory authority but I could be wrong. I think I remember Del Bigtree talking about it.

That would certainly be relevant information, and large-scale testing should certainly be done on many aspects of the vaccine(s). There are a lot of unresolved questions. It has been speculated that many have some degree of preexisting immunity from having had another, cold-type coronavirus. And that that might be a reason why children don’t usually get severe cases: they have likely recently had another coronavirus which may give them some cross-immunity. But if cold-type human coronaviruses are that common, everyone in the world should have gotten it and gotten immunity, but that seems not to be the case, with around a million deaths in the world and 200,000 in the US.

With antibodies often fading within weeks or months, it’s still possible that there remains t-cell or another kind of cellular immunity, at this time harder to test for. All of this may well be true, but its significance remains uncertain.

The death RATE has certainly plunged, but since case numbers continue to explode, that means high numbers of deaths despite the lower rate.

One might have thought that Italy and Spain, etc., after going through the fire in the spring, would have been done with it, especially if they had attained high levels of immunity beyond antibodies. But instead, they and many other countries are seeing new large outbreaks.

I think the only answer is readily-available information from all perspectives and choice. Including, of course, information on vitamin D-3 and zinc. And keeping careful records on every treatment and preventive tried, with universal data sharing and availability.

Could the military be giving out saline placebos? Trump could be forcing pharma to do a true scientific safety test. I think he is punking pharma. LOL!
"Operation Warp Speed"
Think about it......

How long does a M RNA vaccine keep in the cooler ? Any special storage requirements as they haul this vaccine all over the world ?

Gates thinks the "medical people" will want to be first in line which may not be the case.

Of course if it does not work, they will then say everyone needs a 2nd dose.

I notice Moderna released a study on animals and declared after rechallenge none of the vaccinated monkeys got COVID. However, guess what, there was no control.

With humans you cant rechallenge them with the virus but they can do immunity studies on the blood specimens. But you need a control as John Stone pointed out. That control would be the placebo group.

Interestingly Moderna is using saline as a control, at least in Phase 3. This is quite surprising but good news if its true.

An injury for every shot.

In fact,in a new article in BMJ Peter Doshi poses the question whether the level of immunity in vaccine trials is any higher than in the general population:

ie they could be detecting immunity which has nothing to do with the vaccines, and we don’t know the answer to that because none of the projects are testing immunity in the placebo arm. I guess this could actually amount to fraud.

While it is wasteful to make more vaccines than will be taken, I don’t think it would be possible to correctly determine how many will want to take it. Interesting that Fauci and the shills are backing away from the whole idea. So far, there have been no plans to make it mandatory at the federal level, due to the resistance. Virginia backed away from its statement that it would be mandatory in Virginia, again, due to the resistance. I think we should promote laws which would prohibit employers from making it mandatory for employment.

I think the vaccine should be one of the available options, but never be mandated. And we’ll see what the reports on reactions turn out to be. I would not take it, our immune systems are highly reactive, but I would not prohibit the vaccine, making myself partially responsible for ensuing deaths from Covid.

I also would ix-may all the reviling of the Russian vaccine. So it was fast-tracked. So what? Are the MMR, hep-B, pertussis, flu vaccines safe after decades of supposed study? If I were deathly afraid of measles, for instance, I’d get the vaccine: it’s highly effective at preventing the usually fairly mild and immensely beneficial disease of measles. Right now is the time we need the CV vaccine. Many thousands have now gotten the Russian and Chinese vaccines, and apparently at the least they have not caused mass deaths. Putin’s daughter volunteered for it, and if she reacted to it badly, it has not been reported. This competition to try to benefit the American and British vaccines is contemptible. But I hope they keep a careful record of all reported reactions.

I think by next summer, the virus will have mutated to become much less dangerous. It already has, and I think this will continue. A vaccine will be ever less relevant. But this winter a lot of people may be saved by the vaccine, and anyone should be allowed to get it if they want it. We don’t.

By spring will we know if the virus like the SARS is gone for good?

Bob I was able to get the article. It could be you just tried at a time that was busy?

Bob, both links, which are to the same page, worked fine for me, suggesting that it actually is your computer.

Maybe its just my computer .. but .. I can't open either article on AoA today .. sorry to report.