The Special Education Witches of the Rio Grande Valley

This week, I learned of a disheartening situation in Edinburgh, Texas from Evelyn Cano and Debra Liva.  They are two of the fiercest advocates for special needs kids in the entire Southwest. I had the pleasure of meeting them and speaking at their event in the McAllen, TX area twice.

The witches though, are the Edinburgh Consolidated Independent School District, including  school board trustee Edward Pena, Jr who joked that another trustee was "special ed" at their meeting on August 18. The other board members laughed.   The trustees actually laughed instead of calling him out. I damn well hope it was nervous laughter at least. What if he’d made a racial slur, would that have been as amusing?  I was reminded of the Roald Dahl story "The Witches," in which the witches pretend to love children, until they rip off their masks. And show their disdain.  Fish rots from the head. When the board of education thinks special ed students are acceptable targets for jokes, you can bet your red rubber nose, seltzer bottle and punchline that every layer below them knows it.  I am certain the special education teachers and paraprofessionals were wounded when they learned that they too are considered a joke, by virtue of devoting their careers to students like MY THREE DAUGHTERS.  My children did nothing for my district's testing score rating. My daughters did nothing for college acceptance rates. My daughters did nothing for sports accolades. But I can promise you that my daughters made an impact on all of their peers, teachers and paras, all of whom worked so hard for honestly, not a lot of return, except my gratitude.

I HATE that our kids are the butt of jokes. Special education is taking over districts across the nation. Boards that are in such lily white Ivory towers had damn well better come to terms with this.

We're in a nadir of civility and respect across the nation. Special education has taken a monstrous hit during COVID - as most of our kids have been fed scraps of services instead of what IDEA and their IEPs require.  Sometimes, school boards give special education lip service, having no clue what teaching and parenting a child with special needs entails. Me? I'd like to give Mr. Pena Fat Lip Service for his cruelty. However, that wouldn't do much for civility, would it? 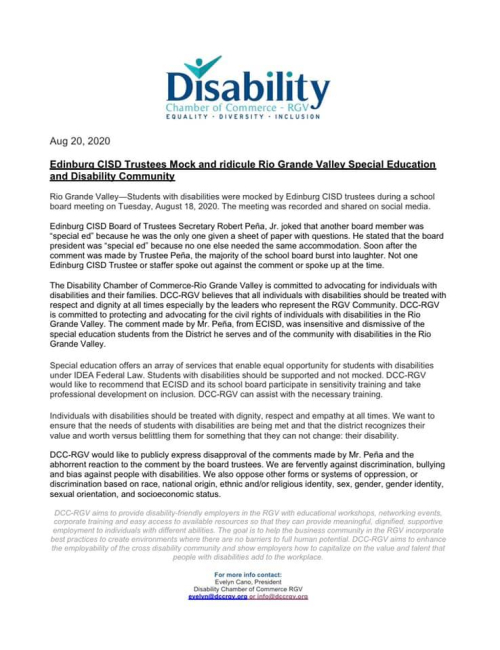 As some of the largest employers in our area, school districts in the RGV still need training and direction with our disability community. We challenge them to be part of a larger discussion and change. We are here to help with  sensitivity trainings and disability awareness trainings.
#dccrgvcares #CallToAction #changethenarrative #ableismexists

Remember, part of what drives these comments is their own FEAR, and IGNORANCE, - their SMALL-MINDEDNESS. They also insulted themselves.
KEEP UP THE GOOD WORK, and have a GOOD WEEKEND!....