The Aging of Autism 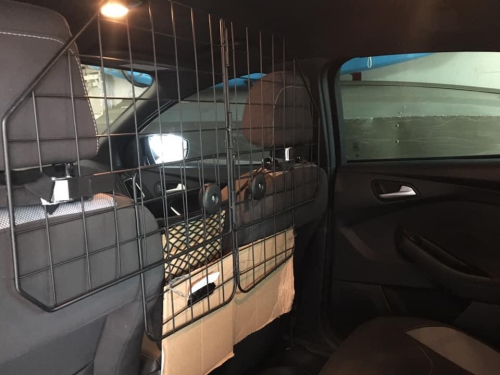 Every so often, I am reminded of why we publish Age of Autism. When Dan Olmsted and Mark Blaxill had the idea to start a blog around the concept of autism being a man-made epidemic, I had just begun a site called Rescue Post for JB Handley and Generation Rescue. We quickly merged, and I was delighted to join Dan and Mark on their mission to tell the world that autism is an epidemic with a hard, fast beginning, a middle (we're in it) and sadly, it seems, no ending.

When I look at the lightning fast, over-the-top response to COVID-19, I'm sickened. We HAVE the ability to make drastic changes to stop an epidemic. Even if we hate or disagree vehemently with the changes. The country CAN change its track on a dime. We HAVE the ability to change behavior the moment the population feels or is told to feel afraid.  But no one seems to be afraid of autism. It has been whitewashed into a diagnosis that America now just accepts.

Take a look at the photo above. This is the car of an autism Mom whose teen son lashes out violently while she is driving. Take a good look at it. She used a dog barrier to create a safety cage, like a police car. For. Her. Son.  He beats her when he rages. She showed me her arms. Her back. Black and blue. Scraped. If you saw the photos, you would weep.  You should weep.  She is not alone. That is what I had to tell her. YOU ARE NOT ALONE.  But Lord in heaven, when we are in the throes of autism, behind closed doors, in our homes, our cars, we FEEL ALONE.

Sometimes our community goes very high level. The work seems to be more about changing the rate at which the planet spins than the daily grind we face.  We focus on major issues that honestly, most of us have very little time to consider, because we are holding on by a thread at home. We've branched out into other health categories and the autism takes a back seat, because we are a third rail. It's painful when that happens. And it seems that the real reason we're together as a community is often forgotten. Many of us have children with autism who are now adults with autism. The behaviors that are tolerable at age five become terrible at 15 and torturous at 25.

This is the Aging of Autism.

The first patient's to leave Lennox Castle Hospital in the 1980's for "The Nirvana" of care in the community project, were the ones who met the criteria of being able to tie their own shoelaces, big wow!
What'sthe alternative ?
see - helensandersonassociates.co.uk
HSA/Person -centered/Personilisation /Training /Consultancy .
If a big pot of money fell out the sky, I wish people could access, HSA Training workshops
Still worth a look, lots of free templates etc available .

An out-of-control meltdown/tantrum in the car on the highway ranks quite high among my family's fears.
My thanks also to Steve for the very helpful link. And Kim, this site is one of the few places we can find people who relate with our situations.

This mom should know she is absolutely NOT alone.
We don't have the car rage thing at the moment (knock on wood, and Steve - thank you so much for linking that product!)...
We do, however, have some god-awful rage in the home. We no longer can have any cups, plates, bowls or mugs due to them being used too many times as weapons to split my head open (try getting to the ER for stitches with no one to watch your kid). We now just have paper plates. Lovely. And I've learned that eventually, the bleeding just stops.
It's very easy to feel you are utterly alone in all of this, as Kim points out, especially when each one of our horror stories is backed by a decade's-long trail of apathy, disinterest, and callous disregard from doctors, schools, and social service agencies. Covid ain't got nothin' on severe autism. I'd take a measly virus any day of the week.

We have the same issue. For the many of you out there I know do as well (I see a car occasionally with some sort of rage rig in it), I thought I'd share a tip. We've had pretty good luck with this product. It doesn't look as bad as the cage models, it's pretty tough, and is easy to remove if you need to:

We have darkened glass where my son sits as he makes faces when the car stops.So long as the traffic is moving hes fine with all the doors locked as hes tried to jump out several times with the car moving.

Like the dog guard wish I had thought of that a decade ago it would have made driving a bit safer for all.

Kim-I agree with the fact that our health system and agencies are working on a solution to end this virus with lightening speed. Why have they chosen to ignore the autism epidemic that we have been living with for decades as our children have now become adults and there is no solution for us and no end in sight to the rising numbers of cases. You are right that autistic behaviors become torturous once our children become big, strong adults and we are living a nightmare year after year after year. My adult son had a huge meltdown the other night because he had a nightmare and my husband had to forcibly restrain my son from hitting himself in the head very hard. He was screaming too. Our windows were open as it is summer and the whole neighborhood must have heard it. I was afraid one of the neighbors was going to call the police, but thank goodness no one did. This is the nightmare we live with year in and year out as both we and our children just keep getting older. When will the health system do the research that is necessary to end this horrible autism epidemic the way they are working on the corona virus epidemic? How long must we wait?

"When I look at the lightning fast, over-the-top response to COVID-19, I'm sickened. We HAVE the ability to make drastic changes to stop an epidemic. Even if we hate or disagree vehemently with the changes. The country CAN change its track on a dime. We HAVE the ability to change behavior the moment the population feels or is told to feel afraid. But no one seems to be afraid of autism. It has been whitewashed into a diagnosis that America now just accepts.'

Unfortunately .. "WE do not have the ability to make drastic changes to stop an epidemic" .. only career bureaucratic public health bureaucracies have that ABILITY … and … these public health bureaucracies have been CAPTURED by a powerful pharmaceutical industry that REFUSES to declare AUTISM the epidemic it has become. By refusing to declare the epidemic … these agencies continue to avoid any and all "DRASTIC CHANGES TO STOP THE EPIDEMIC OF AUTISM".

The question is why? Obviously MONEY is the answer to that question .. as well as an underlying agenda to CONTROL POPULATION GROWTH.

There is no bigger SWAMP in our government than PUBLIC HEALTH .. NONE. These people are ruthless in their determination to avoid any threat to their financial empire .. an empire built upon the misery and suffering of people.

Consider Hydroxycholorquine … which has been proven effective and beneficial to victims of Covid if prescribed quickly and in the proper dose … having literally saved thousands from entering hospital .. where the FINANCIAL INCENTIVE to treat patients via ventilators is financially rewarding … the hospital getting more money if patient is put on ventilator and where a majority of such patients end up dying. Still PUBLIC HEALTH OFFICIALS DENY THE BENEFITS OF THIS DRUG .. DETERMINED INSTEAD TO PRODUCE A VACCINE WORTH LITERALLY BILLIONS UPON BILLIONS OF DOLLARS.

If ANY SWAMP NEEDS DRAINING … IT IS PUBLIC HEALTH THAT NOW HAS BECOME A PUBLIC THREAT TO OUR LIFE, LIBERTIES AND PURSUIT OF HAPPINESS. IT MUST END ..

I was wondering where to put my comment this morning, and you have provided me with the perfect slot.
In the UK Nicola and Boris have decreed that schoolchildren over 12 must wear face coverings in corridors, buses and other communal places, but not classrooms where there is "social distancing". Teachers have pointed out that there is no social distancing in classrooms because there are the same number of kids and the classrooms haven't stretched! But I realized that in class the pupils have to pay attention to the teacher and get on with their work. Where desks were arranged in clusters they now all face the front in rows. So the masks and the distancing are not about a virus, they are to prevent socializing! Of course, we autistic people don't have any problem with that, we can't or don't want to socialize. So TPTB have caused several generations of autistic people as part of their plan to stop socializing, which can lead to organizing! It's the organizing that they're worried about.
Heartbreaking photo at the top. I wouldn't be surprised if parents would be criticized for such a solution. Better to risk an accident.