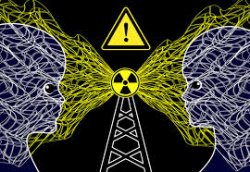 Note: Many of our readers have taken steps to thwart wireless in their homes. However, with COVID school and work restrictions, most all of us are being forced to use wireless devices several hours every single day. It's a Zoom/Google Classroom world. There's no avoiding EMF. Dr. Kostoff,  a valued AofA reader and commenter, has written an detailed monograph that we share today. I looked up the term "monograph, and learned that it means "a detailed written study of a single specialized subject or an aspect of it." Mono - one. Graph - writing.

This monograph describes the largest unethical medical experiment in human history: the implementation and operation of non-ionizing non-visible EMF radiation (hereafter called wireless radiation) infrastructure for communications, surveillance, weaponry, and other applications. It is unethical because it violates the key ethical medical experiment requirement for “informed consent” by the overwhelming majority of the participants.

The monograph provides background on unethical medical research/experimentation, and frames the implementation of wireless radiation within that context. The monograph then identifies a wide spectrum of adverse effects of wireless radiation as reported in the premier biomedical literature for over seven decades. Even though many of these reported adverse effects are extremely severe, the true extent of their severity has been grossly underestimated. Most of the reported laboratory experiments that produced these effects are not reflective of the real-life environment in which wireless radiation operates.

Many experiments do not include pulsing and modulation of the carrier signal, and most do not account for synergistic effects of other toxic stimuli acting in concert with the wireless radiation. These two additions greatly exacerbate the severity of the adverse effects from wireless radiation, and their neglect in current (and past) experimentation results in substantial under-estimation of the breadth and severity of adverse effects to be expected in a real-life situation. This lack of credible safety testing, combined with depriving the public of the opportunity to provide informed consent, contextualizes the wireless radiation infrastructure operation as an unethical medical experiment.  Continue reading here.

There is no lack of competition for that dubious prize! I have addressed some of the others in a previous publication (https://content.sciendo.com/view/journals/jdis/1/4/article-p10.xml?language=en).

Ronald introducing you to "The Global Vaccination Program" , how did you miss that 50 year old holocaust ?

Abortions 2 BN (yes its part of the same program nssm200)

some call it the great culling ? The grand poisoning ? I call it a massacre.
Three card trick merchants are running the world ..... Snake Oil tricksters which an emphasis on the oil.

You don't need wireless to access the internet. Computer connected via cable. In russia the banned wireless in schools but still have wired internet.

Avoid wireless devices as much as possible, and make sure you don't live near power lines or cell towers/5G transmitters

Unfortunately 5G is going to be hard to avoid

I remeber a number of years back 15 or so when you had to hire a EMF reader for the weekend costing £75.On ebay you can buy a machine for £20.I EMF freed my sons bedroom for him and you couldnt even get a cell phone reception in it and he did sleep better then we had to move.I have done the same again and its working just the same.

GOT THIS FAR...
"Humanity is racing along two parallel paths to self-destruction: 1) accelerating
irreversible climate change..."
IF I CAN'T TRUST HIM TO SEE THROUGH THE CLIMATE CHANGE ALARMISM, CAN'T TRUST HIM FOR THE FOLLOWING 1000 PAGES. PITY.