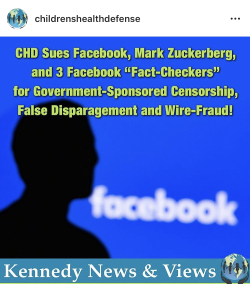 Zuckerberg and the Fact Checkers! Worst band name ever? LOL!

Thank you to Robert Kennedy, Jr.'s CHD for suing  to protect our freedom of speech.

Washington, DC—August 18, 2020—Children’s Health Defense (CHD) filed a lawsuit on Monday in San Francisco Federal Court charging Facebook, Mark Zuckerberg, and three fact-checking outfits with censoring truthful public health posts and for fraudulently misrepresenting and defaming CHD. CHD is a non-profit watchdog group that roots out corruption in federal agencies, including Centers for Disease Control and Prevention (CDC), the World Health Organization (WHO), and the Federal Communications Commission (FCC), and exposes wrongdoings in the Pharmaceutical and Telecom industries. CHD has been a frequent critic of WiFi and 5G Network safety and of certain vaccine policies that CHD claims put Big Pharma profits ahead of public health. CHD has fiercely criticized agency corruption at WHO, CDC and FCC.

Today when you try to repost an article on FB, you receive a warning;
"This article is 3 months old." "This article is about Covid." If I post about the virus, I already know that it is about the virus. The NYTIMES and other bought journals often post about three month old or even 3 year old articles. We Don't warn them. Fb is attempting to erase all history? Can it be said that FB might now be in the public domain?

Thanks for suing, thanks for going after them.

Afte I have re watched Plotkin's nine hour deposition. Hmmmm, When truth is on your side, and the facts have been dug up to the surface--- well you all finish that thought.

I have to admit that some truth takes just about too long to be found out. A life time, my life time. Still it will be found out eventually.

So God bless (Children Health Defense): " And out of His mouth goes forth a sharp sword, so that with it He may strike down the nations; " Rev19:15.

Unfortunately our only hope of avoiding the on-going censorship being waged by hi-tech moguls is to pursue them in a COURT OF LAW … but … it will require a true Justice system where all are equal under the law … too often in the USA today … our Justice system no longer can be counted on to do right by the less wealthy of us.

In many instances .. I am reminded of Orwell's "Animal Farm" … where all pigs are equal .. but … some pigs are more equal than others.

Greatly appreciate those like CHDF and Del Bigtree for taking the fight to our COURTS … where if nothing else … the legal process of discovery is critical to any prosecution.