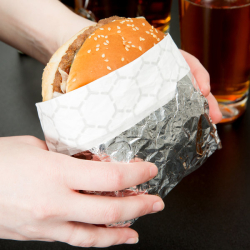 Lala: Aluminum hydroxide, along with AAHS (amorphous aluminohydroxyphosphate sulfate--a Merck proprietary accidentally discovered in one of their labs) is used as an adjuvant ("in medicine, a substance added to a drug to aid the operation of the principle ingredient") in some vaccines because it greatly increases the immune response. Macrophages (specialized white blood cells which are the immune systems' Marine Corps--the tip of the spear) normally rush in to gobble up whatever it is which doesn't belong in the body. They normally dissolve them using special enzymes so they can be excreted. The problem with Al is that these enzymes cannot dissolve it. So some of it is carried inside the macrophage in the circulation to be deposited in organs. Professor Exley's research of autism brains found worrisome concentrations of Al within these very immune cells. Al has no known biological function, and until the late 19th Century there was essentially no free Al in the environment, virtually all of it tightly bound to Silicon and Oxygen in the Earth's crust. So, yes Al is clearly a cause of injury from vaccines, what injury depending upon the affected organ and the individual characteristics of the affected person. Al in medicine has never been tested for toxicity in the 70+ years it has been in use. It was "grandfathered" in to the GRAS (generally regarded as safe) list. I know this is astonishing, but the last year and half has proven beyond a shadow of doubt that we are ruled by utter incompetents, with a few very rich malefactors at the top of the pyramid, aided by Fauci and his gang.

Is this the mechanism for autoimmune illness? The immune system is "primed" by an adjuvant but when there's really nothing to fight, it attacks its own? Or is it just a hocus pocus additive to make it seem like the vaccine is "doing something" when in reality nothing is happening, and aluminum is just damaging.

On Wikipedia Alum is described as another name for aluminum hydroxide, a vaccine adjuvant.