The American People and Social Media 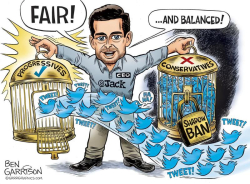 Authored by Jason Sullivan and Bill Binney and posted on ZeroHedge.com.

The American People and Social Media

At the September 5, 2018, U.S. Congressional Hearing in which you gave testimony under oath, you stated, in part:

"Twitter does not use political ideology to make any decisions, whether related to ranking content on our service or how we enforce our rules. We believe strongly in being impartial, and we strive to enforce our rules impartially. We do not shadowban anyone based on political ideology. From a simple business perspective and to serve the public conversation, Twitter is incentivized to keep all voices on the platform."

What we now know, thanks to multiple media investigations, is that; not only is Twitter engaged in censorship, but that it also openly weights its decisions by subjective terminology like "highest potential for harm" meant to obscure its motive of silencing any opposition to the mainstream narrative of both political "sides."

At its inception, America was intended to be a free and open society, a land of opportunity where common people could freely express their thoughts and ideas, a place where Americans could practice freedom of religion, freedom of speech and freedom of assembly without fear of persecution. Throughout the history of our great nation, brave men and women have fought and died to protect these God-given inalienable rights. That is why the Founding Fathers wrote protections into the Bill of Rights for the generations to come. Thomas Jefferson insisted on the 1st Amendment, and swore upon an altar of God against all forms of tyranny over the mind of man.

It is the great wisdom and divine vision of our Founding Fathers that is responsible for propelling America's trajectory to become the greatest nation on earth, both admired by those inspired by its idea and feared by those who oppose the light of truth it represents.

"Once a government is committed to the principle of silencing the voice of opposition, it has only one way to go, and that is down the path of increasingly repressive measures, until it becomes a source of terror to all its citizens and creates a country where everyone lives in fear."

Our Founding Fathers drafted the Bill of Rights not to protect popular speech or the popular majority, but to protect the rights of the minority, lest they fall silent and all real social progress cease. By attempting to make polarized views inaccessible, you effectively shut down the discussion of ideas born out of the flaws in the current system, creating a two-sided echo chamber that neither enlightens people nor helps society grow.

It prevents people from engaging in quality discourse over any ideology that subjectively may "offend" people on all sides.

This Orwellian tactic represents the wishes of citizens on either side of the aisle, but perfectly captures the profit-driven motive behind the corporate stance. That no opinion except the popular view of the moment need be allowed. The popular opinion can be shaped by the controlling interests of the corporation that holds the medium hostage. After all, in a world where lines of division are controlled and silenced, new generations of people being immersed in only an ofGicial narrative will have little other recourse for truly free thought.

We understand that social media is not the government and that companies such as Twitter are private entities. Yet at what point does a private body expand beyond using this excuse to shelter themselves from accountability for their provably suspicious behavior, and enter the realm of being a public service used by billions of people the world over?

BRANNON HOWSE: DR JUDY MIKOVITS ON THE FAKE SCIENCE & DANGERS BEHIND THE MANDATORY MASK ORDERS - SHE ALSO TAKES THE QUESTIONS OF CALLERS LIVE ON AIR
audio - 57 mins 19 secs
Guest: Dr Judy Mikovits.
Topic: Dr Judy joins us to discuss her new book - The Case Against Masks: Ten Reasons Why Masks Should Be Limited.
Topic: Are many Americans that wear the masks damaging their health due to depleting their oxygen level and breathing in carbon dioxide?
Topic: How is SARS-CoV-2 spread?
Topic: How effective is a mask?
Topic: The myth of asymptomatic carriers.
Topic: Brannon explains why he believes the mandatory mask orders are based on lawless elected officials, fake science, and an attempt to brainwash Americans into believing lies, to embrace group consensus, destroy individuality, and to never question the technocrats.
Topic: Should children return to school this fall?
Topic: The difference between dying with the Coronavirus and dying from the Coronavirus.
Topic: We take lots and lots of your calls including callers that speak about becoming dizzy and disoriented from wearing a mask.
"Some Christians are saying that this is your opportunity to show that God is sovereign and you are submitting to your leaders by wearing a mask. Really! Or are you actually submitting to tyranny and lawlessness? There are three branches of government and a lot of these executive branches don't have the constitutional right to make laws. They can enforce them but they cannot make them. That is the job of the legislative branch. I believe this is a test. It is psychological brainwashing, it is group consensus, it is to destroy the individual and it is to see who will comply and who will not."
https://www.worldviewweekend.com/radio/audio/brannon-howse-july-13-2020