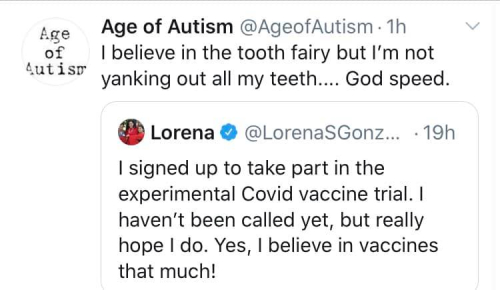 Let's encourage this brave Vaccine Pioneer to bring Senator Richard Pan and Vaccine Compliance Expert Dorit Reiss along to test the very first COVID vaccines.  Perhaps CNN will cover a prime time televised injection with a 2 week body cam follow up (turned off for personal privacy when appropriate.)  Imagine the ratings as Americans sit glued to the TV like the earliest space race!  We need this kind of cohesive national moment. Let's gather a bevy of politicians who have worked so hard to protect children by removing vaccination choice to put their arms where their legislation is.   Josh Elliott here in Connecticut! COME ON DOWN!!! This moment was made for you and yours.

Readers, whom would you like to invite to take the very first, freshly minted, hot of the presses, brand spanking new with the new car smell COVID shots? Tell us in the comments!

Following SB277 in California: California State Assemblywoman Lorena Gonzalez (D-San Diego) served as the Assembly Principal Co-Author and Floor Manager for the Bill and applauded the decision today. “As a mom, there's nothing more important to me than making sure our kids are kept safe – especially when we have the means to protect them from preventable diseases,” Gonzalez said. “As the Governor reminded us today, the science is clear that vaccines work, and removing the personal belief exemption with SB 277 is critical to fulfilling our responsibility to make sure all our students are kept as safe as possible.”

M: I don't know anything about his children.

Why not agree on Bill and Melinda Gates themselves? With the syringe contents verified (to be the vaccine and not saline) by someone actually trustworthy - such as James Lyons-Weiler, Dr. Rossignol, or Dr. Richard Frye? If the contents of the syringe are not verified, then fraud becomes highly likely.

Carolyn M: You are right. I was being ironic. I assumed Gates would never allow his own grandchildren to participate. (but perhaps he would at that). How about his adult children, then?

No children. The children are innocent and have done nothing to deserve potential injury or death.

Everyone over the age of sixty who believes schools should remain closed should be volunteering as test subjects.

Let me guess, these politician P.R. stunts will be the only saline only injections, sans filth..... or better yet.. have Pan fill the syringe with water!
Nice try Lorena. We know after all you've heard, directly from 1000s of parents and not-bought healthcare experts during hearings for SB277/6.. that there is NO way you would ever yourself submit to a vaccine.

At least Senator Gonzalez appears to actually believe in vaccines, which is far more admirable imo than those doctors and researchers who were fine with producing vaccines for young children, but who now seem now really concerned that the COVID vaccine might not be safe enough ( or that it should be given to kids instead and somehow wouldn't work on their age category) when they realized they are likely to be included in the target group for the COVID the vaccine.

The U.S military introduced a very effective program, SUBSAFE, after the loss of one of their submarines,straight out of coming out of dry dock, possibly to shoddy repair work. One of the components of SUBSAFE is that to encourage "ownership" certain of the dry dock workers have the "privilege" of going on board the submarine's maiden voyage. (This privilege, coincidentally means if the sub goes down, so do the workers on board) The Navy has been delighted with the fact that since SUBSAFE was implemented, no SUBSAFE certified submarine has gone down.

I do believe that anybody involved in publishing research that says a vaccine is safe for the general public should get the complete vaccine series , and anyone who mandates a vaccine for any age group to attend school, college etc should also get the vaccine, even if their particular age group or occupation was exempted from the mandate. If they consider the vaccine so unsafe they can't take it, they have no right to force it on others..
I'm not a fan of anyones' kids being made to take a vaccine. However, the people who vote for the mandate, or who declare the vaccine safe as a medical expert, or through research, the pharmaceutical heads who promote the vaccine; those people should all be required to take it.

To be blunt, throughout history, we have seen doctors and others who had no problem with experimenting on their own children, but who did not choose to experiment with vaccines or medical treatments on themselves. And children are innocent of any wrongdoing, regardless of what their parents do.
I do support the criminal case against the dengue fever vaccine researcher, who was charged following the death of children from a vaccine that she had declared safe, but which killed them. The outcry about this, amongst scientists who imo apparently feel integrity is only important in non scientists, is also notable.
https://www.sciencemagazinedigital.org/sciencemagazine/26_april_2019_Main/MobilePagedArticle.action?articleId=1483554#articleId1483554
This source covers the topic, but it is interesting to note that npr puts the number of children potentially killed by the vaccine as high as 600.
https://www.npr.org/sections/goatsandsoda/2019/05/03/719037789/botched-vaccine-launch-has-deadly-repercussions

Well they’re going to need 100,000 altruistic volunteers for this boondoggle so climb aboard the good ship Moderna. Just remember, encephalitis means brain damage, guillain barre is code for paralysis, 1 in a million actually means 1 in 10, and most importantly, you won’t get a second chance at life after the kool aid maims you.

Bill Gates' grandchildren. If none yet, then his children.

When I was an EMT, we were trained to have the one who declared the scene to be safe go first. I am speaking of electrical hazards, but the same principle applies. They always check one last time. Can't hurt. Let the one who makes the most money go first. I don't want to wish ill on anyone. They can display a medical exemption if they want.

Lorena believes in vaccines that much! LOL!

She ain't got nothing on me, I believed in 'em too. What a sanctimonious jerk she be. Oh dear I was too, and for the longest time. I must remember how it was and never let myself forget how easy it is to trust in the so called important people. Now I know it is always best to never ever believe in much, except perhaps that people that live from afar, with nice big jobs, houses, cars; don't mind destroying your little life by so called fake science for mere money. .

I recommend EVERY employee (career bureaucrat) of all public health agencies … CDC, HHS, NIH, AMA, AAP. Universities that accept millions of research grants … all duly elected Senators, Congressmen/women, all nine members of US Supreme Court .. and … all members of President Trump's administration that are breathlessly awaiting and mainly responsible for pursuing this vaccine at WARP SPEED.

ANYONE ASSOCIATED WITH PROCESS THAT DETERMINES WHAT VACCINES ARE RECOMMENDED AND APPROVED FOR OUR CHILDREN.

Then .. after TWENTY YEARS … they all can be evaluated for their LIFE-TIME health since receiving vaccine.