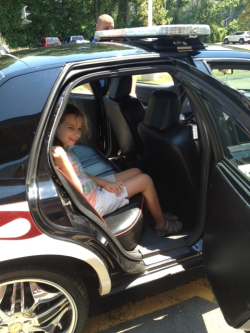 Like another story  I recently shared, this is a memory of something that happened several years ago.  A follow-up of sorts to that phone call I’d received from Lt. Thomas, I shared the encounter with family and friends soon after.  Here is that story, edited a tad, for today’s Sunday post.

So, there I was minding my own business at our local police station when I found myself in one of the back rooms.  While waiting for the young police officer so I could give him some paperwork, I glanced over and saw a note that I made a few years ago.  Hanging on their bulletin board, it's a print out of some stats, including my son’s health information.  It’s there because Ronan is considered a "person of interest".

My first response when I saw the paper and Ronan's picture on it was, "Hey!  That's my kid!" and I'm all sorts of smiling.

In returns the young fellow.  I say to him, "Hey! That's my kid!" sounding all sorts of proud again.

Then, it hits me.

And he's on the police bulletin board.

Because he's a person of interest.

He's no criminal, but this group needs to know who Ronan is.  They need to know what he can and what he can't do if ever there is any kind of emergency, medical or otherwise.

The officer glanced over at the picture and said, "Yeah, I know him.  I remember my first encounter with your son.  He needed help, and I was there to get him home."  I remembered that day and how frustrating it was.  It was a bad, bad day.  But he was there, this young guy, and he helped.

He was ready, willing and able to offer assistance because he knew who Ronan was and because he was aware that Ronan sometimes needs help.  Our caregiver at the time, I’ll call her Celeste, wanted to take Ronan for a walk.  It was a nice day for Ronan to take a walk.  If it’s too hot, he will overheat quickly.  Too many sunny days in a row had kept them inside.  Finally a bit cooler and also overcast, it was a perfect day for an outdoor activity.

I knew they wouldn’t go too far.  Ronan lacks energy to go for the long walks his sister and I like to go on.  Expecting them to be back within 15 minutes, it was taking longer for Celeste to return.  That day, Ronan and our caregiver made it to the stop sign, less than a quarter of a mile away.  Wanting to go no further, Ronan lit’rally stopped in his tracks.  Then, he sat down in the middle of the road.  It isn’t the busiest intersection, but it is a 3-way stop.  Where he’d parked himself was dangerously close to the one road that no one slows down on because they don’t have to.  Trying everything she could do, Celeste could not get Ronan to budge.  The more she tried, the more he resisted.  Forgetting to bring her cell phone, I thought maybe they were enjoying a longer outing.  I had no idea what was going on.

I was home when they headed out.  I was home with the police officer showed up in our driveway with Ronan and Celeste in his cruiser.  No one had called the station to report what was going on, that police officer happened to be doing his rounds through our part of the neighborhood and came upon them.  Without judging or adding any stress to the already tense situation, I learned that he encouraged Ronan to get up.  It took a few minutes, but he was successful.  Once on his feet again, the officer turned and asked Celeste if he could do anything more.  A ride back home would be helpful, she said.  So, that’s what he did.

After taking care of the paperwork that brought me to the station and thanking the guy for his help - not just for today's assistance but for being on-call for those few moments we've required emergency response, I got hit hard with the emotions.  I mean hard.  Holding my tears back, I said thanks again and walked toward the front door.  The closer I got to the entrance, the harder it was for me to see.  My eyes were welling up.  I’ve cried instantly before, but I wanted so badly to stay composed while I was still in the building.

Can I just tell you how hard it was not to cry while making my way from the back of the police station to the car?

It was SO hard!

Keeping myself from losing it in the parking lot, I got in my car, started it and turned on the radio.  As I put my car in gear, this song came on.  It didn’t take more than hearing the first few chords before I completely lost it.

Tears, and tons of emotions, came flooding down my cheeks.  The worry, the fear, the frustrations, and the sheer love I have for this child of mine - I felt every emotion and more.  This song has randomly played after other really tough moments and usually brings on the waterworks.  Well, cue the tears.  Down they streamed covering my cheeks.  Down they continued to fall until I made it safely back home.

Raising a child with special needs is so hard.  So hard.  I try harder to find something positive or hopeful during every situation.  But when I can't see the positive or remain even the tiniest bit hopeful, I can't help but cry.

One of my favorite quotes, by Isak Dinesen, is, “The cure for anything is salt water - tears, sweat, or the sea.”  On days that the emotions are just so raw, I expect those tears.  I’ll never be ashamed of shedding them.  It may not come right away, but a little bit of healing usually happens sometime after the tears have stopped.  That’s when I pull myself up again and face life and our reality.  For us, autism wandering, calling for emergency medical assistance, and needing to diffuse meltdowns are reality.  Some of that, like the wandering Ronan used to do, is not as great a concern as has been in years past, but I won’t let my guard down yet.  I’m glad our police force has promised that they won’t either.

Let's Not forget the police for all they do for the Autism community and many other communities with disabilities. In our small town of Pensacola, FL the police departments attend education meetings with our Autism organization and work closely in support of wandering issues. They are a valued partner.
So happy Ronan was safely removed from a dangerous situation.
Sj

Inspiring story, how old was Ronan at the time of the street incident and how old is he now? I assume he is verbal. Love that song too. Blessings, Sj

I am really glad that Ronan has such loving and capable parents, and that you have experienced so much support. Please don't let's forget the adults and young people who have been killed by the police simply for being autistic.

@Cathy - "One of my favorite quotes, by Isak Dinesen, is, “The cure for anything is salt water - tears, sweat, or the sea.”

I also love the quote. Thanks for reminding me of it.

“Back the Blue ... because they back you”

I long for the day when the only tears you cry are tears of joy.

Led Zeppelin's "Stairway to Heaven" was one of my high school/college national anthems and church hymns....SO EMOTIONAL and powerful to me, back then.... But after hearing it for like the gazillionth time, it just makes me kinda nauseous now! And that's funny, so I smile!....
And most rural, suburban, and small town cops really ARE LIKE the one in your story. They only really want to help, and respond in kind to helpful citizens. Thank-you, Cathy!
KEEP UP THE GOOD WORK, PEOPLE!....