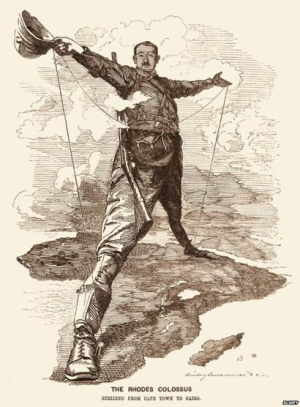 The Black Lives Matter protests which followed the killing of George Floyd in the United States spilt over the Atlantic and sent shock waves through British society as well. One of the most prominent targets of discontent has been the statue of the late 19th century diamond mining magnate, Cecil Rhodes, which stands above the entrance to Oriel College in Oxford, which the college has voted to remove. But, manifestly, what the university is actively doing now in Africa poses more serious questions than Rhodes’s largesse to the university in a much earlier time.

In the past days reports have been appearing about protests across Africa over vaccine trials. Seth Berkley, the director of the vaccine industry cartel organization GAVI is quoted as saying that anti-vaccine sentiment is “the worst” he has “ever seen”. If so, discontent has been boiling up for a long time and may be now finding a focus round the trials of the Oxford Vaccine Group/Jenner Institute/Astra Zeneca coronavirus vaccine. The Oxford based Jenner Institute also receives funding from the Bill and Melinda Gates Foundation.

The organizer of a demonstration at the University of Witwatersrand, Phapano Phasha, told Associated Press:

“The people chosen as volunteers for the vaccination, they look as if they’re from poor backgrounds, not qualified enough to understand…We believe they are manipulating the vulnerable.”

Oxford University are said to have recruited 2000 volunteers for trials in South Africa which have gone ahead despite a complaint by the African Centre for Biodiversity (further trial to be held in Kenya, Brazil and the united States). ACB categorize five areas of inadequacy in the Oxford application to conduct trials:

-Non-disclosure of vital safety data and information, which have been redacted as ‘confidential business information’

-Lack of literature references throughout to substantiate health and ecosystem safety claims, making it difficult to evaluate some of the claims being made as to safety

-Lack of evidence of efficacy of the trials

-Lack of information on the test procedures being used

-Concerns regarding the safety claims made

The authors Dr  Eva Sirinathsinghji and Dr Maryam Mayet (executive director of the centre) note that key information has been redacted in the application as “confidential business information” making it impossible for the public to assess risk, although important information has been disclosed in other places, for instance in the BioRxiv pre-print: van Doremalen et al ‘ChAdOx1 nCoV-19 vaccination prevents SARS-CoV-2 pneumonia in rhesus macaques’ which was not disclosed in the application i.e. in animal testing the Oxford vaccine may have helped prevent pneumonia but did not stop the monkeys from catching the virus or reduce transmission.

Sirinathsinghji and Mayet note about the trial design:

Unfortunately, there appears to be a lack of protocols to address the potential shedding of infectious virus, and protocols to distinguish between infectious and non-infectious virus RNA. Patients will only be tested for the virus upon showing two or more symptoms. Does this mean that we will not know if they are contagious or not?

Further, the most critical first line of defence against SARS-CoV-2 infection is the local immunity on the respiratory tract mucous membranes. This fact is not reflected in this application, nor the article published on the monkey experiments. With regards to safety concerns, there also appears to be no methods included in the trial to assess the threat of Antibody Dependent Enhancement (ADE). It is therefore surprising that methods to assess whether this appears in trial participants are not included in the application.

Finally, the vaccine virus expresses the full-length S protein. It would be interesting to hear the applicant's reaction to the statement by Yong et al:

"Vaccine candidates against SARS-CoV were initially developed based on the full length S protein. However, these vaccines were later demonstrated to induce nonneutralizing antibodies which did not prevent infection, and the immunized animals were not protected from the viral challenge, instead they experienced adverse effects like enhanced hepatitis, increased morbidity, and stronger inflammatory responses. (Yong et al. Frontiers in Microbiology, August 2019, volume 10, article 1781)

Regarding safety Sirinathsinghji and Mayet critique the claim that the viral vector cannot replicate because the “essential E1 gene region – which is essential for viral replication – has been deleted”, pointing out that this could still cause problems in cases of cross infection. And they also note an absence of healthcare provision for those taking part in the trial after it is over, including the especially vulnerable HIV group.

Earlier this year the World Health Organization was censured by Peter Doshi in British Medical Journal for a failure to meet standards of informed consent for the Mosquirix vaccine trial underway in Malawi, Ghana and Kenya, in which the risk of contracting meningitis was 10 times as high in the vaccinated, and the risk of death for girls doubled. Here too the Oxford Jenner Institute and Bill and the Bill and Melinda Gates Foundation were also involved. If human experimenters and health officials are not trusted perhaps they should look to themselves before they look to their critics.

Mr. Moffit, re: Nurenburg, Operation Paperclip, not a theory but an actual gov. program. How many sacrificed for a beautiful equation?

Pogo;
Here it is
"WASHINGTON — The Trump administration has ordered hospitals to begin sending coronavirus patient information directly to the Department of Health and Human Services, bypassing the Centers for Disease Control and Prevention."

Pogo; Trump is being criticized by all the little low Democrats friends of mine for firing or getting rid of a bunch of employees at the CDC last fall. 5 or 6 hundred?

Oh, I found this: "IF YOUR TIME IS SHORT
“Fired” may be a little strong, but in 2018, top national security officials handling pandemics left abruptly and were not replaced by the Trump administration.

As for funding, there’s no question that the Trump administration sought to cut key CDC budget categories. But thanks to Congress, that funding was restored and even increased in bills that Trump ultimately signed."

Stupid Congress, stupid! They got so much cash that it is making them powerfully, tyrannically dangerous.
Here is where I got the last quote from:

There is something going on for sure.

The clinical trial is being conducted in collaboration with multiple study sites across the UK.

And the blind study aye,its just like salt and water in it --only kidding,

What does the trial involve?

Pogo;
No, not by passing the CDC. Vice President was put in charge of the coronavirus and it is helping him in his duties.

I think the vaccine developers should be the first test subjects, then the people that work at the same company. If it is really safe and effective, why would they not?

I’m in the UK so have only just picked up on this but I’m sure Del Bigtree probably knows by now.
Your Prez. wants to bypass the CDC and get the hospital data direct from the hospitals on a daily basis ‘essentially’ sent to him.

Wants to know such facts as:
“Number of remdesivir vials used on the previous calendar day in an inpatient, ED, and/or overflow location”
“Total number of all staffed inpatient and outpatient adult beds in your hospital, including all overflow and surge/expansion beds used for inpatients and for outpatients (includes all ICU, ED, and observation).”
“total number (in use and not in use) of all mechanical ventilators, including adult, pediatric, neonatal ventilators, anesthesia machines and portable/transport ventilators available in the facility. Include BiPAP machines if the hospital uses BiPAP to deliver positive pressure ventilation via artificial airway…. Masks, face shields, goggles, gloves, ect., etc., etc.

The question in my mind is: how can a medical layperson and his team at 1600 Pennsylvania Avenue make sense of all this very complex in formation that only the CDC and their high-skilled analysts can interpret properly? If your Prez should announce something before the CDC gets a chance, billions could die. Or have I got the wrong end of the stick?

Thank you John ,very serious situation enough tae give most ordinary normal people "The dry balk"
without getting the back of their throats swiped on a track- and- trace- herding- task?
"Information Hygiene" being the preferred new shepherding narrative?
Are volunteer test subjects being told before giving, in-voluntary ,non-voluntary consent ? because of information hygiene being viewed as part of the benefits outweighing the risks of giving away too much clear plain language format, of what people in the trial are actually giving thier consent to and for ?
ie , just drop info that vaccine is a genetically modified chimp adenovirus and call it just "A wee common cold virus in a new style vaccine "

See, www.dw.com
DW: News and current affairs from Germany and around the .....
Article What's The Science on DNA and RNA Vaccines ?

Book - No Great Mischief If You Fall.
The Highland Experience . By John MacLeod
Where , General Wolfe was once asked , could the British army find more troops ? "The Highlands ! said the hero. They are a hardy intrepid race. And no great mischief if they fall"

Seth Berkley, the director of the vaccine industry cartel organization GAVI is quoted as saying that anti-vaccine sentiment is “the worst” he has “ever seen”.

Sheer Music to my EARS ....and you can shove your mask too !

"…..they also note an absence of healthcare provision for those taking part in the trial after it is over, including the especially vulnerable HIV group."

Gee … I wonder why vaccine volunteers are NOT receiving "healthcare" AFTER THE TRIAL IS OVER? Where have I heard similar disregard for healthcare AFTER vaccination?

"Earlier this year the World Health Organization was censured by Peter Doshi in British Medical Journal for a failure to meet standards of informed consent for the Mosquirix vaccine trial underway in Malawi, Ghana and Kenya, in which the risk of contracting meningitis was 10 times as high in the vaccinated, and the risk of death for girls doubled."

It appears the WHO has decided INFORMED CONSENT is no longer REQUIRED FOR THEIR EXPERIMENTATION ON PERFECTLY HEALTHY PEOPLE … such as … INFORMING THOSE UNSUSPECTING VICTIMS THE RISK OF CONTRACTING MENINGITIS IS TEN TIMES AS HIGH IN THOSE VACCINATED .. AND … THE RISK OF DEATH FOR GIRLS DOUBLE.

When is this MADDNESS GOING TO END … THE VACCINE INDUSTRY IS GUILTY OF EXACTLY THE SAME CRIMES AGAINST HUMANITY THAT WAS PROSECUTED AT NUREMBERG AFTER WWII … WHERE INFORMED CONSENT BECAME A UNIVERSAL HUMANITARIAN RIGHT.