Home Donate Contact Us Special Reports Science Subscribe by Email Subscribe to RSS Our Mission
COVID-19 & The Rollback of Liberty: Some Smell a Rat
AUTISM in the Time of COVID: Guilt, Histories, and the Village 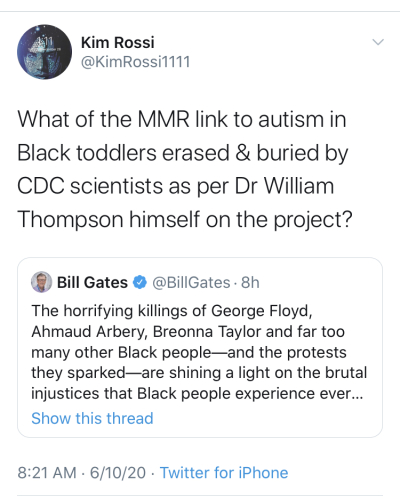 On Dr. Mercola, a report on Bill Gates. Gate's father was a leading figure in "Planned Parenthood".

Will;
What happened to "Green the vaccines"
I think that is on the same playing field as "I am not antivaccines, Oh, I know they have done so much good, but I have some concerns" Which is a statement that gets that ignorant speaker a label of antivaxxer.

Then years go by and things slowly dawn on you that a vaccine injury is not an is, but an "are" plural, and worse of all they are not going away!

Then if you observe other people in your community and the trouble they are having it dawns on you that diabetes is sky rocketing and it is vaccine injured related.
You see the rise if drug addiction in your community, were no one family escapes and they are good, and loving families too. What is going on! . You look at those that do have drug addiction and you notice mental illness like bipolar or OCD, or they had pain all over their body which is probably a mitochondrial myopathy, or arthritis, so many in my community has epilepsy too . They are all vaccine injuries.

You look at what is in the vaccines and you see mercury and aluminum. They tell you that they took out the mercury in the childhood shots -- but they still put it in there, but in trace amounts they say ??? They don't even try to take it out of the flu shots which is again another vaccine that is mandated for children. And all the while they put more and more aluminum.
Aluminum linked to Parkinson, linked to Alzheimer's, and research is showing it is linked to autism.

They are not greening vaccines.
And it finally occurs to many of us that vaccines can not be greened, and at this point in human history vaccines ALL vaccines are dangerous. The risk do not out weigh the benefits.

As the study by famous Aaby that has given vaccines to children in Africa for decades, comes out with a study that says: The children he vaccinated did not die from the diseases he vaccinated against by those vaccinated died five fold times higher from other diseases.

THere is a lot we don't know and what we do know is scary.

It’s very charming, isn’t it, but I don’t see him using his billions to help - mind you if he did I would be looking at the strings.

What is all this incoherent rambling? What ever happened to the "green the vaccine movement" instead of the far right commentators of this website rambling on similar responces to how far leftist ramble on about racist? There is no doubt autism is environmental but it is also over diagnosed. I am a mixed race person who tires of hearing about the Tuskegee experiment. There were was worse medical ethic violations that happened to minorities than that Tuskegee incident but know one talks about those other ones because those medical ethic violations do not involved "vaccines". What about pinche conquestadores de Espana and the British colonist deliberate use of Smallpox to destroy 75-95% of the native population of the Americas. The French/Dutch/Portuguese ect. did this biological warfare to a much lesser extent. Was that not a medical ethics violation? Legitimate use of vaccines made smallpox incredible rare if not non existent
I do not care for Bil Gates but if he is so damn powerful then why does not he summon an army or a dragon or whatever.

It's so nice to know that Bill Gates thinks racism is a bad thing. Of course, the worldwide lockdown he pushed so hard for is wiping out small African-American businesses and pushing Africa to (and over) the brink of starvation.

Vaccine vans on every street corner . Vaccines in one hand ,ice-cream cones 99s, and bottled Irn- Bru in the other . Sex education tutorials optional?

Chewin the fat - Gis a look at yer fanny . You Tube

Sesame Street anyone..no such defence of Dr William Thomson sticking up for people of colour..yeah your not being played seriously your n-o-t-!

The Bill and Melinda Gates Foundation's relentlessly wages a virtual daily WAR on the health and future of AFRICAN AMERICAN CHILDREN ALL OVER THE WORLD … indeed … the Gates Foundation causes more deaths and injuries to African American children in a single year .. than 900,000 police officers cause in their entire 20 year careers.

When Dr Thompson's EVIDENCE OF HARM perpetrated on African American children finally receives the media attention it deserves … the WORLD'S outrage will be well-deserved against all who allowed this CRIME AGAINST HUMANITY to continue over DECADES UPON DECADES .. consider:

"Nearly 65 years after the U.S. Public Health Service Syphilis Study at Tuskegee began, President Clinton apologized for the U.S. government’s role in the research study, which was carried out in Macon County, Alabama, from 1932 to 1972. (40 YEARS!)

The United States Public Health Service, in trying to learn more about syphilis and justify treatment programs for blacks, withheld adequate treatment from a group of poor black men who had the disease, causing needless pain and suffering for the men and their loved ones.

In the wake of the U.S. Public Health Service Syphilis Study at Tuskegee and other studies, the federal government took a closer look at research involving human subjects and made changes to prevent the moral breaches that occurred in Tuskegee from happening again."

Apparently … the 'changes made to prevent the moral breaches that occurred in Tuskegee from happening again" … FAILED TO PREVENT THE ONGOING SIGNIFICANT HIGHER RISK OF AUTISM IN AFRICAN AMERICAN CHILDREN FROM OCCURRING.

It will CONTINUE until our country finally demands that common sense scientific independent study of vaccinated v. unvaccinated populations to ascertain if vaccinated children are significantly healthier than unvaccinated children … TO PROVE ONCE AND FOR ALL TIME THAT UNAVOIDABLY UNSAFE VACCINES HAVE BEEN AN ONGOING DANGER TO THE HEALTH OF ALL CHILDREN .. REGARDLESS OF RACE, ETHNICITY, RELIGION, GENDER, ON AND ON.

All Bill Gates’ social media are being attacked big time. He is being exposed.

So they just repeat no matter what the statement. Hmmm. Will this always work? Will there become a time that PR stunts like this don't work?