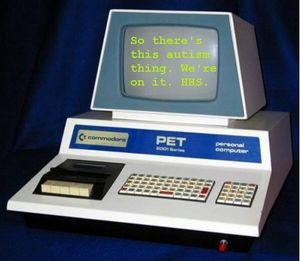 IACC has published its 2019 "Summary of Advances"  Each year, the IACC releases a list of scientific advances that represent significant progress in the field. The 2019 IACC Summary of Advances provides short, plain language summaries of the top research breakthroughs selected by the IACC from a pool of research articles nominated by the members.

Here's is question number 1: Question 1: How Can I Recognize the Signs Of ASD, and Why is Early Detection So Important?

"Recognize the signs." My sister with one typical child told me when Mia was 2 that she thought Mia had autism. In 1997. But IACC is still droning on about recognition.

What caught "BS" an astute AofA reader's eye, and forwarded to me, was Question 6 on the troubling study of autism and suicide. Young people with ASD were at over twice the risk of suicide than young people without ASD.  It stands to reason that autism can bring severe anxiety, social isolation, consistent "failures" and economic difficulties that could be part of suicidal thoughts in ANYone.  Read the first chapter of John Robison's first book Look Me In The Eye to learn how difficult social navigation can be from the sandbox forward. I remember him writing that he felt like a social failure from nursery school. It stuck with me. Of course, autism is a spectrum, and for every person like Robison or my daughters, who could be considered on the severe side by many, there are those who are really out in the world with smarts and skills and so much to offer, and yet their autism beings steep challenges. Maybe your loved one or even you fit this description.  I don't understand why after publishing this study on their site, IACC isn't screaming at the top of their lungs that we need real treatment, amelioration, remission, call it whatever you want, for autism. Our loved ones deserve every opportunity for health and mental health. As Mom to three women with autism, I'm particularly troubled by the data for suicide and females on the spectrum. Likely these are women with much different speech and communication abilities than my daughters. Still, it makes me wonder if any of my girls might have thoughts even close to suicidal.  If you can think of any advances brought to you by IACC, let us know.

Question 6: How Can We Meet the Needs of People with ASD as They Progress Into and Through Adulthood?

Recent research has found that individuals with ASD are at higher risk for suicide, suicide attempts, and suicidal ideation. However, little work has been done to understand the incidence and specific characteristics of suicide risk in the ASD population. One study conducted in Sweden found that individuals with ASD are almost 8 times more likely to die by suicide than the general population and that females with ASD were more than 13 times more likely to die by suicide than females in the general population. These concerning statistics highlight the urgent need for population-based studies of suicide risk for ASD individuals in the United States. The aim of this study was to examine the incidence and characteristics of suicide risk among people with ASD, using a large sample of population-based data from the state of Utah. The researchers predicted that suicide incidence would be significantly higher among the ASD population than the non-ASD population, and that suicide rates would be higher among females with ASD than females without ASD. Additionally, they hypothesized that ASD males would be more likely to use violent methods of suicide (e.g., firearm, blunt force injury) than ASD females "

It is my understanding that singulair has a black box warning for suicidal ideation.

I wonder how many individuals who have autism (children and young adults) are taking it without either their parents/caregivers or themselves knowing about this warning.

“There are those who are really out in the world with smarts and skills and so much to offer, and yet their autism [brings] steep challenges.”

My son has “high functioning” autism. He tries every day to meet neurotypical standards. And he has failed so many times and in so many ways. In second grade he was put on Paxil. He tried to jump from a third story window. His father died when he was 20. He fought drugs and suicidal thoughts for two years.

He has terrific visual skills and wants to be a filmmaker.

He is currently working with a professional screenwriter to make a movie about a young man with this condition. There is no title for the film yet, but I might call it “No Walk in the Park”

Oh I see, there is them there serotonin reuptakes a showing up again.

If you find yourself against a wall --- Low dose serotonin reuptake (Prozac) may help, but larger dosages can cause an adverse reaction.

Kids with autism have more adverse advents that the general population with serotonin reuptake. . I read that somewhere? I can't remember where? Dang it. I will try to find it.

Also Prozac does not help one bit with OCD.

Serotonin reuptake also lowers the thresh hold for seizures. That is for those that have epilepsy as well.

But back to OCD.
Our kids might have intense interest in things and it is actually kind of a pleasure to them.
But like all things it is has an ugly side.
I found out that there are OCD that comes in as an unwelcome and unwanted thought. It comes most often as a question that demands to be answered, or solved or a solution found for it.

What does help is N acetyl cysteine and a low carb, intermittent fasting.
These same things help in cravings and addictions.
Addiction could be a form of OCD? Really?
OCD involves the immune system effect on those areas of the brain that involve OCD?

Studies have reported increased blood levels of serotonin 1,2,3 in people who have autism spectrum disorder, also called ASD, compared to people who have neurotypical function. These studies point to serotonin as a potential biomarker of the disorder. So they might already have plenty of it in their systems.

But this suicide report? Not what I wanted to hear.
But suicides are up for the whole population as well, just like drug addiction.

To ignore the rise in autism and the problems that show up in that group seems to be having a high price for all of the ignorant population.

John .. your observation and concern that "anti-depressant medications" may lead to dangerous behavior making suicide more likely is acknowledged by "BLACK BOX WARNINGS" on certain anti-depressant drugs may cause "HOMICIDAL OR SUICIDAL THOUGHTS".

Imagine how many reported having such thoughts .. acted upon them .. for the drug company to put that BLACK BOX WARNING on their product? Would love to know the numbers that forced them to warn people of the dangers????

It’s a tragic picture. I also fear that a quick resort will be to anti-depressant medication which may lead to dangerous behaviour and even making suicide more likely.