It was around 9 pm on Thursday evening when a storm came through.  One of the first thunder storms of the season, this one had the works – lightning, thunder, and steady, heavy rain.  Never a fan of thunder, especially at night, I was glad that we were altogether in the den watching a movie as a family.  Snuggled between Ronan and his younger brother on the couch, I felt safe.

Turning off the TV after the movie ended, we stayed in the den a little bit longer and said prayers with the kids.  Just as we sent them on their way to get ready for bed, the electricity went out.  In between flashes of lightning was total darkness.  Groping the furniture so as not to trip on anything or anyone, I looked for a flashlight.  Ronan’s youngest sister is terrified of the dark and had just gone to my bathroom to brush her teeth.  Knowing she’d be really, really scared, and because that bathroom was on the complete opposite side of the house, I made a plan.  That plan changed when I realized that Ronan’s brother had just gone into the basement to play video games.  Both were in darkness and would have to make their way through an even darker hallway.  Since she was more scared than he, I ran to her first.  Not as nervous as I get with thunder, but just enough to be a bit jittery, Willem laughed the entire way back up the stairs looking for the rest of us.  Finding Ronan, he offered to bring him to his room and help get him ready for bed.

Once the kids had flashlights and could continue with the bedtime routine, I went back to clean up the den.  I thought Fiona had gone to her own room to go to bed already.  She had to be at work at 5 am the next day, but I could still hear her voice.  Listening for where it was coming from, I was surprised to hear her in my younger girls’ bedroom.  I was even more surprised as I realized all of my children were in the girls’ bedroom.  Ronan and Willem had taken a detour and joined them.

Not wanting to break up the sibling bond, I stopped in the darkened hallway and listened.  I could hear laughter, silly noises, and funny stories being told.  The storm, which had wreaked havoc in our neighborhood, had brought them together.  Cherishing the moment, I thanked God for the lightning and thunder I normally loathe.

Like other storms I’ve experienced, last night’s is now but a memory.

Sitting down today to write, I was struck by how often ordinary life turns ominous.  Without warning or preparation, one finds it’s dark and scary.  As you grope through the gloom, your first thought is for those who are vulnerable, the ones most dependent on you.  Will they be okay?  Will they make it through?  Will they be scarred?  If yes, for how long?

But rather than wallow in the shadows or the darkness, I remind myself to look for the positive.  I haven’t always done that, including when Ronan was injured by vaccines.  Discovering that injury was a horrible realization.  On the very tough days, it still is!  What positive could possibly come from it?  Well, when I think about it, I can list a few encouraging things that have happened – I’m a better advocate for all of my children because of that injury.  I’m a stronger mother also.  It might not occur right away, but I think other parents can eventually list a few positive things in their life as well.

I find that when I do look for the positive, it’s always better than dwelling on the negative.  And like tha 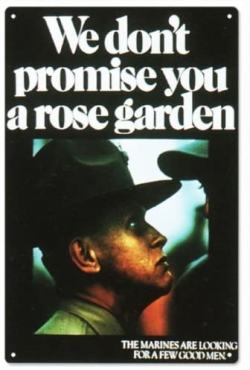 t storm that came through Thursday night, negatives don’t have to last forever.  Sometimes they end on their own; other times, I have to tell myself that it’s time to walk away from them.

When my dad entered the Marine Corps, there was a popular recruiting poster reminding him that, “We don’t promise you a rose garden.”  Those words can apply to family life: “We don’t promise you bright, sunshiny and clear days.”  What a perfect world it would be if each day was like that!  For a few minutes last week, when all of my kids were pig piled into one bedroom reminiscing about storms they remember from “when they were little kids”, life was perfect.

It was just my kids being kids.  There was no stress.  There were no worries.  They were just happy to be together, Ronan included.  It was totally unexpected but most welcomed when their laughter and love for each other spilled out of that room and into that hallway.  Those peaceful moments after the storm didn’t last forever, but they will be a memory that I won’t soon forget.

Heartwarming and positive, as usual, Cathy

This reminds me of the scene in the Sound of Music where Maria sings "My Favourite Things" to distract the children from the storm. "Raindrops on roses and whiskers on kittens..."

Storms, like sunny days, serve a purpose in God’s creation. Thank you for finding the sunshine in the midst of life’s storms.