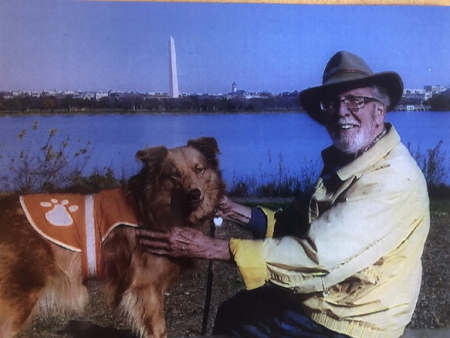 It is with great sadness that I write to tell you that David Burd, valued AoA contributor since 2009, passed away this week, on Wednesday afternoon, May 13th. Four weeks prior, David fell from his roof and incurred multiple serious injuries. Unfortunately, his injuries kept him in the ICU, and in the end, proved to be too severe to overcome.

On Wednesday, it became clear to his sister and brother that it was time to remove life-saving support, and not long after, minus any apparent suffering, David took his last breath. His brother Steve and beloved dog Roxie were present with him in the ICU, and his sister Sally was present via FaceTime from across the country. For the last 20-30 minutes of David's time here on earth, Sally, Steve, and the 5-6 nurses present sang a number of songs to him, and Roxie was allowed in bed with him, licking and loving him in his final moments.

For those who have read AoA for any length of time, you know that David was a regular commenter and occasional contributor of articles. He was investigative, astute, and honest...all that is missing from mainstream media today...and we were blessed to have him share his important research, keen mind, and courageous truth telling with us here at Age of Autism.

David's family appreciated the many kind and supportive comments from AoA readers that were posted in response to the May 5th article reporting David's accident, and the many prayers offered up for him. Should anyone feel inclined to post additional thoughts about David, or messages to his family members, please do so here in the comments section. I will be forwarding the link to his sister so she can share it with David's family members. Additionally, should anyone want to make a donation to AoA in his name, and in remembrance of his work and writings, I am sure that David would have supported and appreciated such a gesture.

In loving memory of a truth-speaking warrior here at AoA and beyond,

So sorry to hear about David Burd. He will be missed. Sending warm thoughts and love to his family.

I will sure miss David's valuable research and comments here at AoA!
My sincere condolences to his family.

What a shame, with sympathy for the family in their grief .
A battle song of comfort,Psalm 23 to The Bays of Harris. YouTube.

So sorry to hear of David's tragic death. Condolences to his family at this very difficulty time. He will certainly be missed but not forgotten by all regular readers and contributors at AOA.
R.I.P.

My deepest sympathies to his family.He will be missed.

My deepest condolences to David’s family.

Peace to all of his family. David you will be missed.

I enjoyed my correspondence here on the boards with David so much. I am heart broken. He was a treasure! Rest In Peace, friend. My sincere thanks to his compassionate help with my daughter’s health.

So sorry to hear, Rest In Peace, David. The fight will continue!

Hello to all of you AoA contributors and readers. This is Sally, David’s sister, chiming in to thank you all for what a wonderful support network you were for David during his life. Thanks to Laura Hayes, and her reaching out to me to inquire about David, I have been able to keep her up-to-date on David’s journey since he fell last month. She has so beautifully summarized the events that have followed, but I just wanted all of you to know that David’s body clearly told us that he was ready to leave his earthly home. I honestly believe that his love for his dog, Foxie Roxie, and his commitment to the age of autism values, beliefs and research, would have been the two reasons he would have rallied.
Apparently his body was just too broken to be put back together again.
Thank you all so much for your kind comments and acknowledgment of the valuable research that David brought to the forefront. His commitment to this, was truly his passion.
Fondly, Sally. PORTLAND, OR

I am grateful that I got to know David, and so sadden that our time of conversing is over for now.
I have no doubt that we will meet again under happier circumstances.

I am so very sad to learn of his passing. I have enjoyed his insightful comments here for many years, and will miss his contributions.

My heartfelt condolences to his family and friends,

It is truly heartbreaking to see one of our great people leave us. These great minds/great personalities .... gone .
I hope AOA will be able to go back and reprint some of his work or comments and thanks to Laura for her suggestion about donations thumbs up .

I'm so sorry. It was always a treat to hear from David! I miss him.

Rest in peace, David. I extend my sincerest condolences to David's family. What a great loss.

I only knew David by his words and this is such a gut punch that that I don't know what to say except it really hurts.

I am so saddened to hear this. I used to read everything he wrote. My sincere condolences to his family. May he rest in peace.
Maurine

I just prayed for his joy in Heaven. I had googled the surgery and didn’t think it sounded critical. It was reported that the doctor said he was broken but fixable. I though he would be returning, but was worried because of no updates and no return. I will miss him. We corresponded nearly ten years ago about minimuzing rabies vaccines for dogs and he told me about Roxie. I hope Roxie will be well cared for and recover from the loss. May the Lord give him eternal joy and peace!

I'm heartbroken. What a gift he was to our community. To David's family and friends, I am so very sorry for your loss. My prayers are with you.

Please thank David's family for sharing the photo. I am grateful others will still be able to read his wise words on AoA posts.

God Bless you David keep an eye on us from up there please.

Words cannot express how sad I feel to read this. My sincere condolences to his family.

I respected all David's comments so much and his contributions will be sorely missed.

David was a well-respected, valued contributor to our AoA community .. may god bless him and his family.

David was a wonderfully knowledgeable contributor to AoA and a relentless seeker after truth behind government data - he will be much missed by us all.