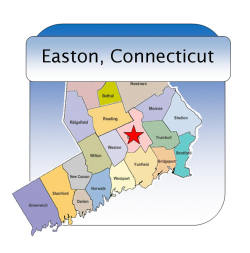 From Children's Health Defense. I live next door to Easton, a bucolic bedroom community with large home lots and as far as demographics go, see for yourself (from Wiki.)

People have been on lockdown for the past 2 months, but one freight train that has not been halted by Covid-19 is the fast and furious installation of 4G/5G small cells across the state, including in residential neighborhoods. However, one small town in Fairfield County, Easton, recently decided to put the brakes on the 5G rollout. On May 7, 2020, the Easton Board of Selectmen unanimously approved a 5G cease and desist resolution “until such technologies have been proven safe to human health and the environment through independent research and testing.”

The resolution cited that the Federal Communications Commission has not updated its Radio Frequency (RF) radiation guidelines since 1996 and lacked long-term safety testing of the new 5G wireless technology, despite being advised to do so by the American Academy of Pediatrics, the U.S. General Accounting Office, and hundreds of medical and scientific experts around the world. RF radiation is classified as a Class 2B carcinogen (possible cancer causing agent) according to the World Health Organization. Read more at CHD.

Seconded!
You said it all.

Every town must ban together to stop 5G and 4G in their towns and schools. WiFi and cellular radiation is a cofactor to autism and immune disruption to name just two negative outcomes. We are blessed in Easton that our elected officials took time to understand the science and facts and would rather practice the precautionary principle than do harm. Join our Facebook group CT Residents for Responsible Technology to learn more.