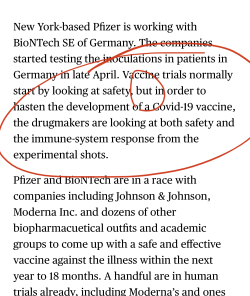 Yesterday was the 59th anniversary of the first American manned space flight by Alan Shepard. Now imagine that NASA was granted the power to demand that EVERY AMERICAN take a space flight starting on May 6th, 1961. THAT's the COVID vaccine.  For some, the vaccine might be a giant leap for health. For others? A Challenger far worse.

Pro-vax. Anti-vax. Doesn’t matter. Bloomberg is telling you that safety for a product already exempt from liability, safety is not the very first priority.   Anyone who takes the new vaccine will be participating in the world's largest clinical trial. "Vaccine trials normally start by looking at safety, but in order to hasten the development of a Covid-19 vaccine, the drugmakers are looking at both safety and the immune-system response from the experimental shots."

Bloomberg News published an article yesterday about the race to bring COVID-19 vaccines to market.  Below is an excerpt and link. And I've taken a screen shot to preserve the critical phrasing.

...New York-based Pfizer is working with BioNTech SE of Germany. The companies started testing the inoculations in patients in Germany in late April. Vaccine trials normally start by looking at safety, but in order to hasten the development of a Covid-19 vaccine, the drugmakers are looking at both safety and the immune-system response from the experimental shots.

Pfizer and BioNTech are in a race with companies including Johnson & Johnson, Moderna Inc. and dozens of other biopharmacuetical outfits and academic groups to come up with a safe and effective vaccine against the illness within the next year to 18 months. A handful are in human trials already, including Moderna’s and ones from CanSino Biologics Inc., the Beijing Institute of Biotechnology and Inovio Pharmaceuticals Inc.

Pfizer’s U.S. trial will involve 360 patients in two age groups: 18 to 55, and 65 to 85, though trials in the older population will start only after safety and immune response are established in the younger group. The University of Rochester Medical Center/Rochester Regional Health and Cincinnati Children’s Hospital Medical Center will eventually provide testing sites for the vaccines as well.

“In an early vaccine trial, you actually monitor for a lot of potential reactions, you cast a very wide net, you actually ask the people to report to you everything they’re feeling,” said Pfizer’s Phil Dormitzer, chief scientific officer for viral vaccines. “You don’t know for sure until you’ve looked at a very large number.”

Given what has happened with the development of other vaccines in the past, there is a risk that the new inoculation could actually make patients more susceptible to severe illness.

“Knowing there’s a potential risk, we’re going to proceed as though that’s a real risk,” Dormitzer said. “If it were to happen, we’ll detect it as soon as possible”

Pfizer and BioNTech are looking at four different shots -- and at a variety of doses and schedules -- and will decide as the trials proceed which is the most effective. The aim is to have a shot ready for emergency use by the fall. The companies are also sharing data with regulators in real time, instead of analyzing it themselves before submitting it and applying for approval from regulators...

Phase I trials are used to evaluate safety. If safe the larger Phase II trials are done to evaluate efficacy , dosing as well as safety. Sounds like they moved direct to Phase II putting more people in the trials at risk.

Perhaps the more significant problem was skipping safety testing on animals before proceeding to human trials.

And as you say, no liability.

Also, consider that our current CDC Director
Supposedly admitted to cooking numbers in HIV vaccine trials (CHD) and vaccine makers are repeat offenders when it comes to fraud.

Once they roll it out you can bet side effects will be ignored or treated as a new symptom of a mutated Covid (which explains its ineffectiveness).

Fortunately all our elites will have antibody certificates and be exempt .Those requiring vaccinations will be non-essentials subject to lockdowns since most wont have antibodies

If only there was a way to make all these CEO’s, politicians and public health guys and their families to take the shot as part of the approval process, and make sure they weren't given saline as President Ford was with the Swine Flu Vaccine

Did anyone watched the five-minute video that Laura referenced? What were the key points?

The video has already been removed.

There is a platform called banned.video; perhaps the above-referenced video (which had already been removed by the time I looked for it (within 2 1/2 hours) could be submitted there. Here's an example from banned.video:

Long but very much worth a look. Watch to about 35' and longer for full Q & A.

Reports of vaccine adverse events by parents (and RFK Jr. and Dr. Andrew Wakefield) have been greeted with relentless ridicule. This is the first time that the public has been told by official sources that vaccines can have serious side effects. This makes sense: when a vaccine is administered to millions of adults at once, it's hard to explain away adverse events as coincidence, or the effect of bad genes.

Years ago Dr. Andrew Wakefield concluded that the safety studies of MMR were inadequate. This conclusion was corroborated in a 2005 review by the prestigious Cochrane Collaboration: "The design and reporting of safety outcomes in MMR vaccine studies, both pre‐ and post‐marketing, are largely inadequate." https://www.cochranelibrary.com/cdsr/doi/10.1002/14651858.CD004407.pub2/full

Perhaps not surprisingly, a 2020 update concludes that there's actually nothing to see, everything's fine and everyone should move along: https://www.cochranelibrary.com/cdsr/doi/10.1002/14651858.CD004407.pub4/full

The video has already been "removed by the uploader", i.e. (I think/assume) Dr. Buttar. Why? I don't understand why he would post something and state that he will be deleting it in 24 hours. Can anyone make sense of this for me?

Even Paul Offit, in today's Wall Street Journal, worries that the vaccine developers are cutting corners on safety.

If what is presented in this video is even half-true … major investigations worldwide are called for.

"The Public Readiness and Emergency Preparedness Act (PREP Act) added new legal authorities to the Public Health Service (PHS) Act to provide liability immunity related to the manufacture, testing, development, distribution, administration and use of medical countermeasures against chemical, biological, radiological and nuclear agents of terrorism, epidemics, and pandemics. It also added authority to establish a program to compensate eligible individuals who suffer injuries from administration or use of products covered by the PREP Act’s immunity provisions."

We are doomed to failure if we keep repeating the same mistakes over and over .. expecting different outcomes each time .. learning absolutely nothing when we sacrifice SAFETY in the quest for EXPEDIENCY.

Perhaps I wouldn't be so cynical of the "good intentions" to produce a SAFE life-saving vaccine if our prior effort .. Ronald Reagan's 1986 "National Childhood Vaccine Injury Act (NCVIA)" .. had proven successful in creating a vaccine industry that has proven itself worthy of PROTECTION from all liability related to vaccines? Such as .. if someone suffers from a vaccine injury, they can't bring a lawsuit against the manufacturer. Instead, they must make a claim to the government, and then, they may receive compensation through this program.

While the NCVIA has indeed protected the vaccine industry .. it has at the very same time neutered victims of vaccines of their CONSTITUTIONAL RIGHT TO SEEK LEGAL REDRESS IN CIVIL OR CRIMINAL LAW.

For decades it is common knowledge the NCVIA established Vaccine Adverse Events Reporting System (VAERS) .. a deliberately constructed PASSIVE SURVEILLANCE SYSTEM … has historically failed to capture more than 5-10% of serious adverse events. The promised "non-adversarial" Vaccine Court has been anything but "non-adversarial" .. families seeking due compensation for their seriously injured .. including dead children .. are forced to risk financial ruin facing the unlimited resources and Justice Dept lawyers available to HHS .. the defending agency responsible for protecting the vaccine industry. Even so .. parents have been awarded 4-5 BILLION DOLLARS for their injured children .. whose child's death is capped at $250,000 for each child.

We all know Reagan's "good intentions" have gone horribly astray .. yet .. here we are again with the vaccine industry awarded BILLIONS to pursue a vaccine .. a vaccine that will be free of ANY LIABILITY for the injurie suffered by the people .. who in this instance may be MANDATED TO RECEIVE.

For what it is worth .. in my humble opinion .. there is no such thing as a "safe and effective .. one size fits all vaccine" .. THERE WILL BE SERIOUS RISKS TO SOME .. RISKS MADE EVEN MORE SO DUE TO THE LOWERED PRIORITY OF SAFEY IN FAVOR OF THE EXPEDIENCY TO PRODUCE THE VACCINE

Less than 5 minutes. Says available for 24 hours only. Worth the watch.