Safeminds on AB-2004 from Axial Biotherapeutics 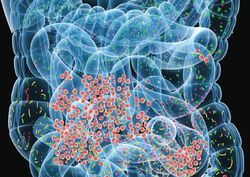 Note: Our Teresa Conrick has written about the microbiome and possible treatments that could help the autism community for several years. You can read her body of work here.  During this quarantine, seems we could all benefit if the drug indeed reduces irritability, anxiety and social withdrawal.  Stay well. Stay safe.

Results of a novel microbial-inspired drug study look promising at reducing the core symptoms of autism. Adolescents with the condition had lowered scores on irritability, anxiety and social withdrawal while on the medication.

The drug, called AB-2004, works on the gut-brain axis. Communication between the bacteria in the gut and the brain impacts the way the brain develops and functions as well as behavior. The composition of the bacteria and other organisms of the autistic gut microbiome differs from those without the disorder.

AB-2004 removes harmful metabolites such as 4-EPS from the gastrointestinal (GI) tract that are generated from certain kinds of gut bacteria. These metabolites can create a leaky gut allowing harmful substances to enter the bloodstream and then the brain, affecting brain function. This could lead to symptoms of autism.

In this just-completed early phase human clinical trial, Axial reports the study met the primary endpoints of safety and tolerability with no drug-related adverse events noted. Adherence to the three-times-per-day dosing regimen was greater than 90%. The drug can be administered by mouth.

Significant reductions in plasma and urinary levels of several key microbial metabolites were observed, which indicate that AB-2004 is positively acting on the lining of the gastrointestinal tract. On the behavioral outcomes, Axial reported that –

Twenty-six teenagers with autism were part of the study, which was an open-label design without a control group. Treatment lasted for 8 weeks. The study was conducted in Australia.

In an earlier study by Axial using an animal model of autism, AB-2004 “demonstrated the ability to repair leaky gut and improve repetitive behavior, anxiety, and ASD-related sensorimotor gating deficits by removing key microbial metabolites” in a mouse with autistic-like features.

Teresa, is this similar to CM-AT? Those trials have gone on for 5 years. https://clinicaltrials.ucsf.edu/trial/NCT02649959
Shouldn't we have heard a decision by now? Whether it is breaking food down with enzymes, or removing harmful metabolites.... will that be enough - when restoring the integrity of the gut lining may be needed.