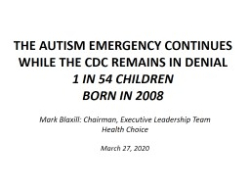 View a 12 Powerpoint Presentation here: 1 in 54 born in 2008 by Mark Blaxill. Each slide also follows at the end of this post.

Every two years, the Center for Disease Control and Prevention (CDC) puts out a new report from its Autism and Developmental Disabilities Monitoring (ADDM) Network. The 2016 report, a survey of 11 states, was just released and reported an average autism rate of 185 per 10,000 among 8-year-old children born in 2008, or 1 in 54. That rate was an increase over the 2014 ADDM Network report, which reported a rate of 1 in 59. I’ve summarized the new reports findings in the attached slides (see HERE).

All of this news will be lost as the report has been released in the midst of the COVID 19 panic. It’s always dangerous to compare public health crises, but consider this. If instead of raising the threat of death among the elderly for a few short months, some new but different coronavirus permanently disabled close to 3% of American children in a pandemic fashion, how do you think our country should react?

I don’t doubt the public health response would be even more aggressive than today’s COVID 19 response. But because the autism epidemic has been normalized, these new findings will pass by almost entirely unnoticed.

Instead, the CDC not only continues its practice of autism epidemic denial, it has downgraded its concern. In the 2014 ADDM report, a sentence buried deep in the text acknowledged that autism was “an urgent public health concern.” In today’s release, an autism rate of 1 in 54 is merely “a continuing public health concern.” And instead of raising the alarm over their unbending trend line, the CDC reserves its main concerns for racial equality: applauding the fact that autism in African Americans is now broadly similar to that of white and Asian Americans.

“Overall, the magnitude of prevalence differences by race and ethnicity has declined in recent year. Reduction of these disparities might indicate progress toward enhanced detection of ASD among all children.”

This is all a part of CDC’s ongoing to a commitment to its own orthodoxies, beliefs that fly in the face of the reality of the evidence on autism time trends. All in the interest of their self-congratulatory talking points, which persistently claim that if autism rates are rising, well then they must be doing a better job! From their Frequently Asked Questions page, we can still see the following pabulum

Q: Is there an ASD epidemic?

A: More people than ever before are being diagnosed with an ASD. It is unclear exactly how much of this increase is due to a broader definition of ASD and better efforts in diagnosis. However, a true increase in the number of people with an ASD cannot be ruled out. We believe the increase in the diagnosis of ASD is likely due to a combination of these factors.

CDC is working with partners to study the prevalence of ASD over time, so that we can find out if the number of children with these disorders is rising, dropping, or staying the same.

We do know that ASD are more common than we thought before and should be considered an important public health concern.

I wrote at greater length on this several years ago. (see Mark Blaxill: Lies, Damned Lies and CDC Autism Statistics ). How truly tragic how little things have changed. 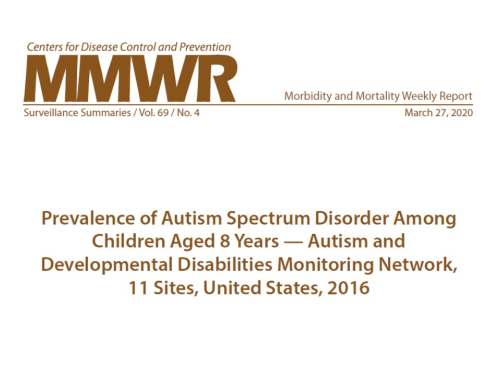 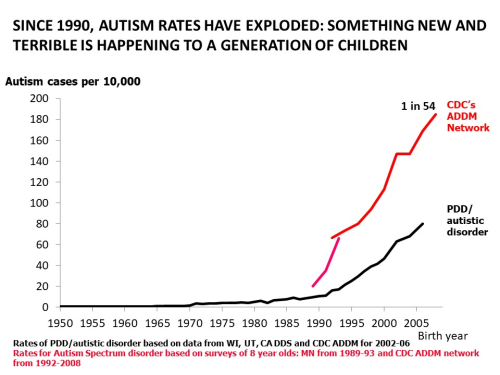 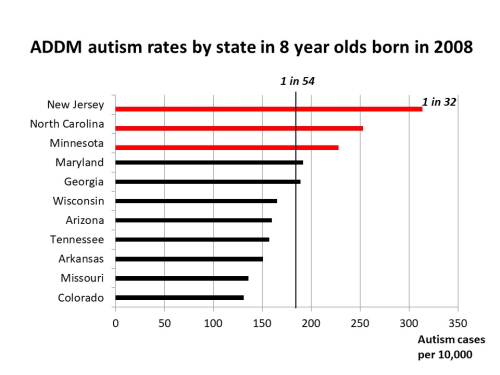 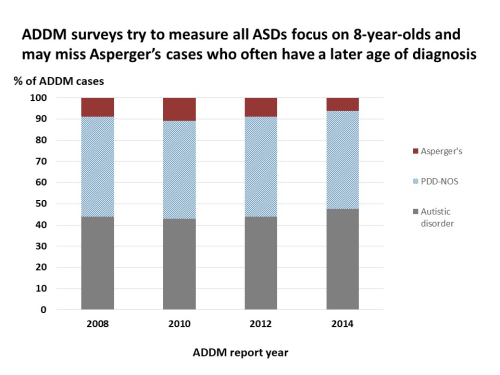 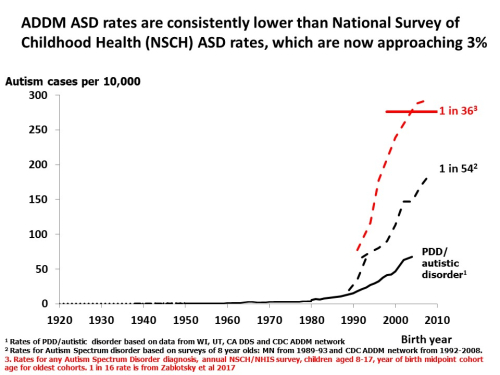 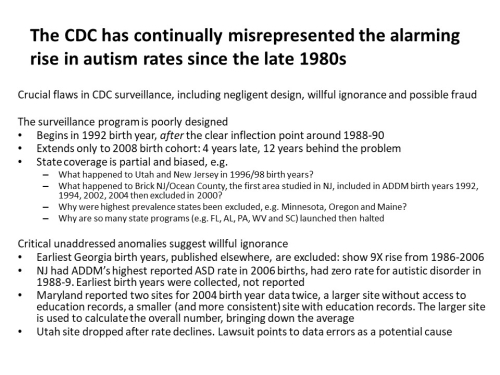 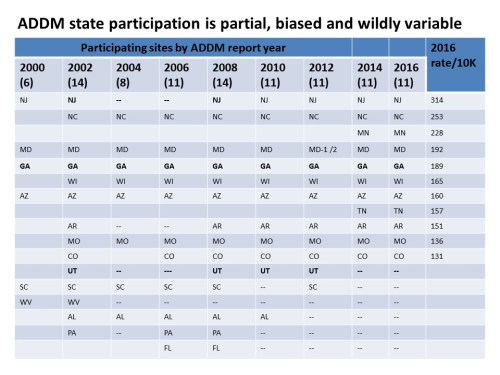 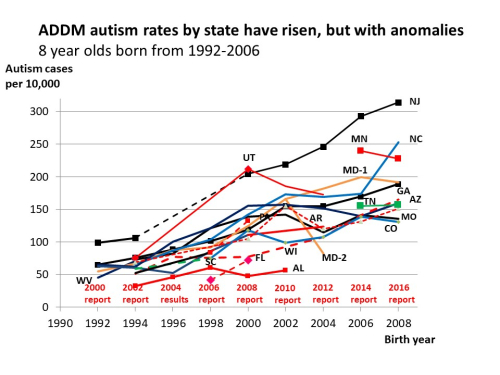 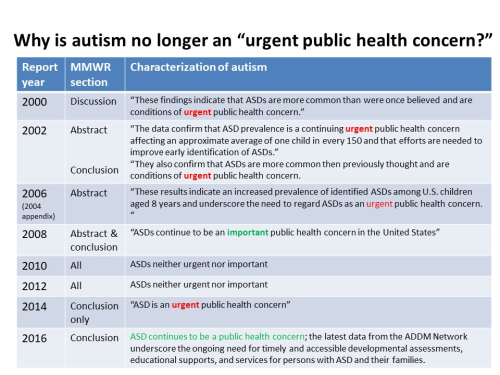 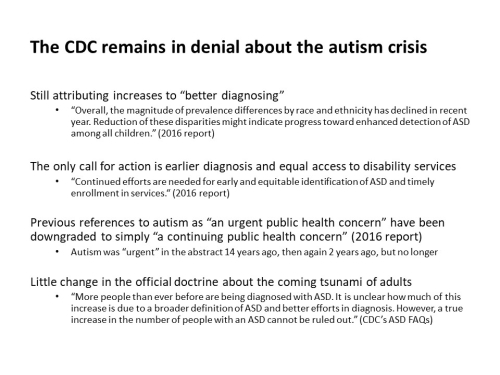 And we believe the test annie,not.As you know same people make the vaccines that make the disease`s that makes us ill and allows them to inflict more products to use on us,
Trump says hes open for business on Monday certain States in America he is going to re- open-way to go!

With more people being tested, the rise in COVID 19 cases is literally the result of better diagnosis.

Your comment was "spot on" as the British say. There are abundant Medical Journal and Bio-Molecular Journal papers that prove the damage and/or death to nerve cells via all the injected toxic excipients (ingredients) in vaccines is not recoverable. Once nerve and brain cells are killed, there can be no recovery of those specific cells.

However it can, and does, thankfully happen that other neurological pathways may "pick up the slack" and have a variety of "recoveries" as contributors here on AoA have recounted. My deepest gratitude to parents/some doctors who recover children via their unceasing efforts. Personally, my efforts (no children) are to STOP the toxic/deadly Vaccine Holocaust.

The autism community chose to disregard the many attempts that I have made to explain autism as an outcome of a stealth adapted virus infection acquired during pregnancy. Public Health officials also balked at the concept of stealth adapted viruses. This was primarily because some of the viruses originated from the cytomegaloviruses infecting the monkeys used to produce polio vaccines. There was also the relief in the mindless criticism of the research by members of both the chronic fatigue syndrome and autism communities. In addition, other researchers had not bothered to try to reproduce the culturing of stealth adapted viruses. I can now reconcile why the standard virus detection methods had failed to identify stealth adapted viruses. More importantly, the research has shown the body as having an effective non-immunological anti-virus defense mechanism. This is mediated by what is referred to as the Alternative Cellular Energy (ACE) pathway. The ACE pathway clearly has relevance to the current coronavirus pandemic. It also has relevance to the therapy of autism. In commenting on the increasing incidence of autism, it would be helpful to see more discussion regarding stealth adapted viruses by the autism community. This may also encourage participation by parents of children with autism in clinical studies.

Mark Blaxill and All,

Here is a Journal paper that documents New Jersey new autism cases rising ever faster within 2 years of the panicked Swine Flu (H1N1) episode beginning Spring 2009, continuing through that flu season of 2009-2010.

In November of 2009 millions of American babies older than 6 months were inexcusable injected with a rushed-into-production brand new H1N1 flu vaccine admittedly loaded with ethylmercury, AND, this was on top after already having the "seasonal flu vaccine" that was ALSO loaded with ethylmercury (as less than 5% of regular/seasonal infant flu shots were truthfully Thimerosal Free).

So, it is no surprise 4 years later after 2009 that New Jersey (better monitored than most States) has had its autism rate quickly rise yet again. For those who did not read Mark Blaxill and Dan Olmsted's book Age of Autism, the book reveals how the Brick Township in New Jersey was the focus of a major new autism frequency with the CDC swiftly dropping out of sight after they were initially interested.

Yet again, like the Brick Township in 1990, the CDC is one of the major Medical Institutions that keep causing the ever-rising the autism spectrum, etc., beginning with their absurd criminal stance that ethylmercury is harmless. New Jersey's rising statistics following the 2009 double-dosing of injected mercury-laden flu vaccines into babies and infants is NOT a coincidence. It is cause and effect.

It's not the just the CDC that is in denial. For the most part the media, whether conservative, liberal, online or alternative, downplay the disabling aspects of autism and play up the "gifts." And I can't think of a major autism organization that dares to use the word "cure" in their mission statement or on their website. We can thank the neurodiversity movement for much of this denial, with their focus on autism as a difference rather than a disability.

So the autism rate among black children used to be somewhat lower than that for white children, but now they've caught up -- and the CDC calls that "progress". The autism rates have been skyrocketing for 30 years, and the "experts" at the CDC say they haven't figured out whether it's a real increase or just better diagnosis, but they're working on it. Idiots.

Given that autism reduces life expectancy by one-quarter to one-half, it may be killing more people than Covid 19, as well as disabling many more, but no one is talking about it. And whereas we expect the Covid 19 epidemic to end in a matter of months, the autism epidemic will continue to escalate with no end in sight.

It is precisely because of the CDC's callous indifference to raging autism epidemic all over the globe for the past 30-40 years .. that I have absolutely no confidence and trust in their vigorous .. panicked … response to Covid19. How in God's name can we trust the very same "public health officials" that have DELIBERATELY IGNORED the hundreds of thousands children diagnosed with autism .. year after year .. no plausible "cause" nor potential "cure" identified .. all the while DIMINISHING the catastrophe by carefully avoiding naming autism as the EPIDEMIC it has become .. waffling between whether or not it is an URGENT PUBLIC HEALTH CONCERN????

DO THE DAMN STUDY OF VACCINATED V UNVACCINATED POPULATIONS NOW …. NOW … NOW.
Enough of the pretense of having "no evidence" to prove vaccines cause autism … if one refuses to look for evidence … one will guarantee finding "no evidence".

Instead of Congress passing a 2 TRILLION dollar aid package for Covid19 … a virus that will NEVER surpass the harm done to generations of children that autism has done … how about FUNDING THAT DAMN STUDY TODAY .. TODAY … TODAY....

More on Dr Fauci, WHO...
https://m.youtube.com/watch?v=9uWriZEC8BQ

I've said for years that autism will more disastrous than anything we can imagine. Throughout history there have been plagues and epidemics, but the victims either died or recovered. Massive numbers didn't become dependent on society for the rest of their long lives.
There is no precedent for the way autism will impact the U.S. There is no plan, no worry or even a slight interest in what's happening.
It defies understanding.