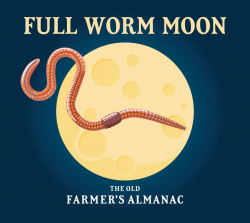 I don't know about you, but I read this headline  A “Full Worm Moon” Is Happening on March 9, Marking the Beginning of Spring with the brain of an autism Mom who has seen more than her share of lunar reproductive cycle pin worms. Turns out, the Full Worm full moon means Spring, when the earth softens and worms wriggle on up and robins nosh on them. Still, for many of us, every full moon means behavior spikes for our kids. And worse, seizures. We battled pin worms in my household for years. I firmly believe that my daughter's weakened gut and immune system, exacerbated by several rounds of antibiotics for sinus infections provided the breeding ground for a pin worm infestation that launched her very first grand mal seizure. "Febrile" my left foot. The seizures occured almost  monthly, but this was long before she went into puberty. I worked with a Naturopath named Skye Weintraub via a phone consult. Her book,  "The Parasite Menace" was in my nightstand for close to 20 years, with my notes from our phone call on several pages.  Wishing all of our readers smooth sailing through this lunar event. XOX
###

This year’s first supermoon is almost here! The Full Worm Moon will brighten the night sky on Monday, March 9.

Since Native Americans named full moons to track seasons, the names often correlate with nature. According to the Farmer’s Almanac, one of the most popular names for March’s full moon is the “Full Worm Moon '' because as the weather warms and the ground softens, earthworms begin to appear, attracting robins—a sign of spring. Since the cawing of crows signals the end of winter, another name for March’s full moon is the “Full Crow Moon.” The full moon is also called the “Full Sap Moon” because the sap of sugar maple trees begins to flow around this time.

See Book The Gaelic Otherworld : John Gregsorsen Campbellson's superstisions of theHighlinds and IThe Islands of Scotlands and witchcraft and second sight in the highlands and islands
Edited by Ronald Black

Not wanting to sound rude, there is a big /huge training deficiency needing tackled head on , for basic standards!

Aye well our boy never disappoints us on a full moon -party on G enjoy!

Hoping you can provide a link for the show you mentioned as I haven't been able to find it. Thanks :)

The name alone makes me squirm. Josh does better now but I remember the days of the full moon.
Maurine

Also very interesting is the work of Dr. Steven Rochlitz who discusses how underlying Porphyria is the root cause of so many issues. His discussion is very interesting and his interview with Deborah Walker on You Tube entitled "Food For Thought Episode 104" is well worth listening. He discusses autism and why certain individuals are vulnerable to vaccine damage and how this underlying disorder is missed or never even considered which can result in so many chronic medical problems such as epilepsy, CFS, Lyme never going away despite treatment, constant parasite problems and many more.

I had heard of Porphyria before but never realized that once again the medical establishment wants to sweep this underlying condition under the rug as those vulnerable may block doctors pushing vaccines and drugs for all sorts of illnesses on them. It goes round and round with big pharma and clueless doctors. Dr. Rochlitz does a good job of explaining.