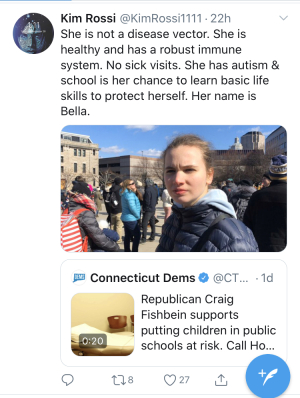 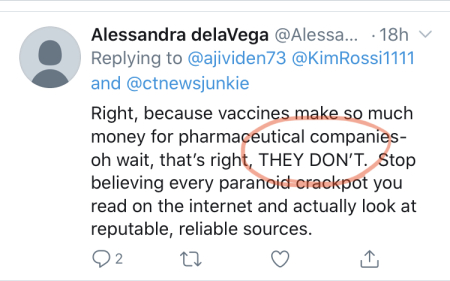 On Tuesday, I was at the Capitol in Hartford during the vote by the Public Health Committee on HB5044. The bill is going forward, after several hours of recess to include amendments that convinced some of the Democrats to vote YAY instead of NAY.  Two Democrats voted NAY, and we thank them. They are Jack Hennessy and David Michel. The politics is clear, the votes across the country are falling straight down party lines. It's depressing for those who want balance, and see the value of work on both sides of the aisle that we need as our kids with autism grow up.

On Twitter, there is an account called "Connecticut Dems” that Tweeted about a Republican named Craig Fishbein and accused him of "putting others at risk." That's a bogey man. Coronavirus aside - when we talk about (under-vaccinated” (eye roll) people, to call them a risk, or a threat, or dangerous is a slippery slope. I Tweeted back with a photo of my daughter, who was with me last week at a rally at the Capitol, "She is not a disease vector." One of the responses to me is below. From undervaccinated (assuming she's over 25) and undereducated Twitter person. Vaccines don't make money. And I am a paranoid crackpot.  So I did a one minute Duck Duck Go search and came up with a report from the ever crackpotty Reuters about the earnings of Merck which I RT'd back to Ms. Twitter. I do not expect to hear from her again.

Sales of the company’s measles-mumps-rubella and chickenpox vaccines rose 27 percent to $496 million, helped by government tenders in Latin America and higher European and U.S. demand.

Measles cases in the United States have hit their highest level since the virus was declared eradicated in 2000, with a total of at least 705 confirmed cases so far. Merck is the sole provider of the measles-mumps-rubella vaccine.

There is no mask for this kind of ignorance. No Purell. No Lysol wipes. This blind obedience and unwillingness to learn is everywhere.

I think it was on "Inside Science" (BBC) last week that the problem of antibiotic resistance was discussed, and it was stated that the pharma companies can't afford to develop new antibiotics because THEY WORK (!) which means they don't get used so long or so often. If people understand that, then why don't they understand that conversely vaccines harm, and that's the only reason Pharma wants to make them. Meanwhile, the ever increasing number of deaths from antibiotic resistant infections is rarely heard about on the news.

Kim, great answer. I think that when faced with actual facts, having unknowingly stated something wrong,sometimes people just decide to slink off in shame.
The reality is,that often people are lied to, and trust the people who tell them lies.When forced by actual facts to see that the truth is different from what they have been told, it can sometimes take people a while to process this.
The truth will out, and so many of these lies being told rely on no one communicating the actual facts.. It seems for example, that already that newspaper articles are starting to actually acknowledge the existence of vaccine injury, however "rarely" they describe it as happening.. A while ago, they were completely certain all vaccines were "safe" for everyone.All those factual responses, all those comments, person by person, they have an effect.

The Tweeter insists Pharma isn’t in it for the money - even despite vaccines’ liability-free legal status, thanks to the National Childhood Vaccine Injury Act (NCVIA) of 1986. Falsehoods like hers are propagated by (1) ignorance, (2) greed, or (3) both.

Global Vaccine Market Projected to Surge to $58 Billion by 2025
https://thevaccinereaction.org/2019/01/global-vaccines-market-projected-to-surge-to-58-billion-by-2025/

If only they could develop a vaccine against the “dumb” virus. Sure is a lot of that going around. Either that or the internet and social media is saturated with astroturfers who are paid to spread this rot. Lol. Vaccines don't make money. Whats next, up is down and the sun revolves around a flat earth?

That's the Kim Rossi I've come to know and love the past couple years, - she's educating and waking up folks one at a time if she has to!

If vaxxes are so good, then WHY are they ONLY available as PRIVATE, FOR-PROFIT products? Why aren't vaxxes only available as PUBLIC, NON-profit products....????....

KEEP UP the GOOD WORK, people!

Why does "healthcare" in the U.S. cost so much that we have wars over who should pay for it and on the other hand wars to force "health" choices upon a public that largely does not feel secure with their own health?

I hope people are starting to get that the already essentially mandated vaccine schedule has inheritantly increased demand for many other pharamaceuticals to "treat" all the vaccine created immune-mediated disorders and increased rate of sicknesses from vaccine compromised immunity.

Once the role of vaccine pollutants are understood, we can look at the role of other pollution sources with more accurate perspective also.

With all the media coverage (hysteria) about Coronavirus exposing how reliant we have come to rely upon CHINA who manufacturers 94% of our anti-biotics and 87% of prescription drugs … NO ONE HAS QUESTIONED WHETHER OR NOT CHINA ALSO PRODUCES OUR VACCINES???

It seems odd that ONLY vaccines are still "made in the USA" .. but .. please .. SOMEONE AT LEAST ASK FAUCHI OF CDC IF CHINA DOES NO PROVIDE OUR VACCINES.

It’s not just the gross a amount of profit vaccine products themselves generate, it’s the gateway the practice of vaccination forces everyone to walk through to a lifetime of allopathic care and dependency on other pharmaceutical products. The witch-doctor loses his power if people realize that lighting a tree on fire has nothing to do with whether or not the sun comes up. If people were allowed to live by the real science of vaccination we could save a lot of trees...I mean children!

Pharmaceutical giant Merck said that high consumer demand for its measles vaccines, amid the largest U.S. outbreak in decades, helped boost sales in its second quarter. Sales of children’s vaccines, which includes the New Jersey-based company’s MMR vaccine, for measles, mumps and rubella, jumped 58% year over year to $675 million, Merck announced in its second-quarter earnings report. Merck, which is the sole U.S. supplier of measles vaccines, said the strong growth was due in part to this year’s measles outbreak. https://www.cnbc.com/2019/07/30/nasty-us-measles-outbreak-helps-boost-merck-vaccine-sales-in-q2.html

In 2014 the NY Times wrote, “Once a loss leader for manufacturers, because they are often more expensive to produce than conventional drugs, vaccines now can be very profitable.” The NY Times continued, “Old vaccines have been reformulated with higher costs. New ones have entered the market at once-unthinkable prices. Together, since 1986, they have pushed up the average cost to fully vaccinate a child with private insurance to the age of 18 to $2,192 from $100.” The total vaccine market in 2000 was $5B and in 2020 it is estimated to reach anywhere from $59.2B to $61B– a growth of 1,100%. Pfizer, the sole manufacturer, had revenues of nearly $4 billion from its Prevnar vaccine line last year, about double what it made from high-profile drugs like Lipitor and Viagra, which now face generic competitors. https://www.nytimes.com/2014/07/03/health/Vaccine-Costs-Soaring-Paying-Till-It-Hurts.html Pfizer’s Prevnar 13 is the world’s leading vaccine product generating $5.8 billion in 2018 as well as the company’s top product over the last four years. The 13-valent vaccine is one of the only two pneumococcal vaccines produced in the world. No other companies may make cheaper versions of the vaccine until March 2026 – when Pfizer’s Prevnar 13 patent expires. In May, Merck announced a $1B expansion to its plant in Virginia to increase its the production of its HPV vaccines. Weeks later, the drugmaker announced it will build a new $650M plant for Gardasil in North Carolina. https://thehighwire.com/__trashed-4/

The pharmaceutical companies are not the ONLY people making a lot of money from vaccines … such as … the CDC, FDA, pediatricians .. to name just three .. not many people know the CDC actually has patents on vaccines .. consider the following:

"The CDC Immunization Safety Office is responsible for investigating the safety and effectiveness of all new vaccinations; once an investigation is considered complete, a recommendation is then made to the CDC’s Advisory Committee on Immunization Practices (ACIP) who then determines whether the new vaccine will be added to the current vaccination schedule. Members of the ACIP committee include physicians such as Dr. Paul Offit, who also serves as the chief of infectious diseases at the Children's Hospital of Philadelphia. Offit and other CDC members own numerous patents associated with vaccinations and regularly receive funding for their research work from the very same pharmaceutical companies who manufacturer vaccinations which are ultimately sold to the public. This situation creates an obvious conflict of interest, as members of the ACIP committee benefit financially every time a new vaccination is released to the market."

"... Right, because vaccines make so much money for the pharmaceutical companies - oh wait, that's right, THEY DONT...."

***********
No sure what this person would classify as a "money maker'. But any company that has multiple products, each with revenue streams that are being measured in the 'hundreds of' millions .... is making a lot of money from those products. Kinda naive actually, for someone to even imagine a scenario where they wouldn't be.

But the bigger picture, is that global pharmaceutical sales exceed a trillion dollars a year now. And anyone who believes that none of that revenue is being collected from people with vaccine-wrecked immune systems, has way too much faith in the altruistic nature of what vaccines are really all about.

The Pharma brain washing is second to none it puts Stockholm Syndrome in the shade whilst intelligence is sunning itself on a warm cosy beach page on Twitter soaking up BS.