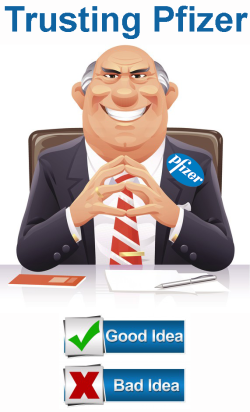 Maine has accused Pfizer of being a criminal organization in federal court.

Maine also mandates that Mainers cannot send their children to daycare unless they entrust the life and health of their infants to that criminal organization.

On May 24th, 2019, Governor Janet Mills (formerly Maine's Attorney General) signed LD 798 to remove religious and conscious objections to mandated vaccines for daycare, preschool, k-12, and all post-secondary schools.  This made four doses of the Pfizer vaccine of PREVNAR 13 (PCV13) mandatory for at ages two, four, six and 15 months in order to be enrolled in a Child Care Center, Child Care Facility, Small Child Care Facility, Home Day Care, Public Pre-school programs, Nursery schools, Pre-K programs, Early Kindergarten, 4 year old programs or any child development program under the control of the State Department of Education or under the control of the Office of Child Care and Head Start.

But only two weeks earlier, on May 10th, Governor Mills current AG, Aaron Frey, filed suit against Pfizer, along with 43 other states, in the US District Court in Connecticut for price fixing.  The anti-trust suit accuses Pfizer of conspiring with 34 other pharmaceutical entities to fix the prices of generic drugs, so that prices could stay higher than they would had competition between them taken place.

Rather than describing the suit, I will simply post part portions you can read it in Maine's own words:

"I. SUMMARY OF THE CASE

1. For many years, the generic pharmaceutical industry has operated pursuant to an understanding among generic manufacturers not to compete with each other and to instead settle for what these competitors refer to as "fair share." This understanding has permeated every segment of the industry, and the purpose of the agreement was to avoid competition among generic manufacturers that would normally result in significant price erosion and great savings to the ultimate consumer. Rather than enter a particular generic drug market by competing on price in order to gain market share, competitors in the generic drug industry would systematically and routinely communicate with one another directly, divvy up customers to create an artificial equilibrium in the market, and then maintain anticompetitively high prices. This "fair share" understanding was not the result of independent decision making by individual companies to avoid competing with one another. Rather, it was a direct result of specific discussion, negotiation and collusion among industry participants over the course of many years.

2. By 2012, Teva and other co-conspirators decided to take this understanding to the next level. Apparently unsatisfied with the status quo of "fair share" and the mere avoidance of price erosion, Teva and its co-conspirators embarked on one of the most egregious and damaging price-fixing conspiracies in the history of the United States. Teva and its competitors sought to leverage the collusive nature of the industry to not only maintain their "fair share" of each generic drug market, but also to significantly raise prices on as many drugs as possible. In order to accomplish that objective, Teva selected a core group of competitors with which it already had very profitable collusive relationships – Teva referred to them as "High Quality" competitors – and targeted drugs where they overlapped. Teva had understandings with its highest quality competitors to lead and follow each other’s price increases, and did so with great frequency and success, resulting in many billions of dollars of harm to the national economy over a period of several years."

A reminder that both Pfizer and Teva were responsible parties in the opioid crisis, with Teva paying $646M in settlements.

"3. At the zenith of this collusive activity involving Teva, during a 19-month period beginning in July 2013 and continuing through January 2015, Teva significantly raised prices on approximately 112 different generic drugs. Of those 112 different drugs, Teva colluded with its "High Quality" competitors on at least 86 of them (the others were largely in markets where Teva was exclusive). The size of the price increases varied, but a number of them were well over 1,000%."

Some version of the word "conspiracy" occurs 285 in the complaint.

"5. As a result of the information and evidence developed through that investigation, which is still ongoing, the Plaintiff States allege that Defendant Teva consistently and systematically, over a period of several years, along with the other Defendants named herein and other unnamed co-conspirators, engaged in contracts, combinations and conspiracies that had the effect of unreasonably restraining trade, artificially inflating and maintaining prices and reducing competition in the generic pharmaceutical industry throughout the United States, including but not limited to, the markets for well more than one-hundred (100) different generic drugs, many of which are identified herein. This conduct has resulted in many billions of dollars of overcharges to the Plaintiff States and others, and has had a significant negative impact on our national health and economy."

Remember, generics exist to bring down drug prices after the patent holders initial years of being the only company allowed to sell the drug they developed.  This allows low income individuals access to drugs that they may not otherwise be able to afford.

Pfizer and their alleged co-conspirators decided profits via fraud were a higher priority to them than the health of their customers.

"12. Generic drug manufacturers argued publicly that the significant price increases were due to a myriad of benign factors, such as industry consolidation, FDA-mandated plant closures, or elimination of unprofitable generic drug product lines. What the Plaintiff States have found through their investigation, however, is that the reason underlying many of these price increases is much more straightforward – illegal collusion among generic drug manufacturers.

13. Generic drug manufacturers, through their senior leadership and marketing, sales and pricing executives, have routine and direct interaction. The Defendants exploited their interactions at various and frequent industry trade shows, customer conferences and other similar events, to develop relationships and sow the seeds for their illegal agreements. These anticompetitive agreements are further refined and coordinated at regular "industry dinners," "girls' nights out," lunches, parties, golf outings, frequent telephone calls, e-mails and text messages."

"19. The Defendants knew their conduct was unlawful. The conspirators usually chose to communicate in person or by cell phone, in an attempt to avoid creating a written record of their illegal conduct."

"1226. Defendant Pfizer, acting through its wholly-owned subsidiary and alter ego, Defendant Greenstone, entered into agreements with Teva and various other competitors to allocate and divide customers and markets for various generic drugs in accordance with the principles of fair share discussed above, and to fix and raise prices, and rig bids, for numerous generic drugs. The details regarding these anticompetitive agreements are discussed throughout this Complaint. The generic drugs subject to these market allocation and price-fixing agreements include at least the following:

"1230. As a direct and proximate result of these agreements, Plaintiff States, governmental entities and/or consumers have been injured in their business or property because they have had to purchase or reimburse for numerous generic drugs, including those identified herein, at supra-competitive prices, and Defendants Pfizer and Greenstone have enjoyed ill-gotten gains from the sales of these generic drugs."

I encourage you to keep reading.  This is what the State of Maine believes is true of Pfizer.

Yet the State of Maine's new law compels anyone who wants to put a child into care so that they can work to trust Pfizer with the life and health of their two month old.  Pfizer, the company that they believe is involved in wide ranging conspiracies to put money over the health of patients.

Maine apparently believes that trust in Pfizer is mandatory for Maine Parents.

Many Mainers choose not to do business with corporations that do not share its values, or in whom they do not trust.  One can opt out of doing business with Monsanto, or putting a dollar in the pockets of the Koch brothers, or adding to the market value of The Trump Organization.  But vaccine mandates require that individuals do business with corrupt industries.

It has been noted during the discussion in Maine over the last year, that to attend any school or work in a health care corporation, Mainers must do business with criminally convicted Merck, and purchase the measles, mumps, and chickenpox vaccines from them.  The same is true of criminally convicted Pfizer for the right to fully participate in society in early childhood.  If you want to boycott Pfizer for their role in the opioid epidemic, even if their products killed one of your loved ones, you may not.

Sanofi, and GSK are also morally objectionable corporations, and the only makers of Pertussis vaccine, so you must buy from them as well, or be banned from a public or private education, daycare through college and trade school.

But this is the first case that I have seen of a State itself charging a company with federal crimes, while forcing its residents to purchase their products, and offering no religious or philosophical exemption to those whose conscience will not allow them to do business with criminals.

It is incumbent on the Governor Mills and AG Fray to explain to the public their support of the passage of LD 798, removing religious and conscientious vaccine exemptions, while the State of Maine is forcing parents to do business with a corporation that they believe is guilty of federal crimes, in order to fully participate in society.

Your state may need to explain themselves as well.  Below is the full list of states suing Pfizer.  Is your state one of them?  Do they mandate Prevnar 13?  Let us know in the comments.

Same thing in New York. Once upon a time, Governor Cuomo was Attorney General Cuomo and look at who he and Mike Bloomberg sued

Mandate the Merck MMR and trash your citizen's religious rights while doing so.

Conspicuously - not the State of California.
Because in California, it is perfectly legal for pHARMa to murder citizens, or even babies.
And to defraud the State.
In fact demo-criminals like pan do it day in and day out.

Where is more info on the suit? Is it the people doing it? I’m ready to sue Colorado exactly the same way