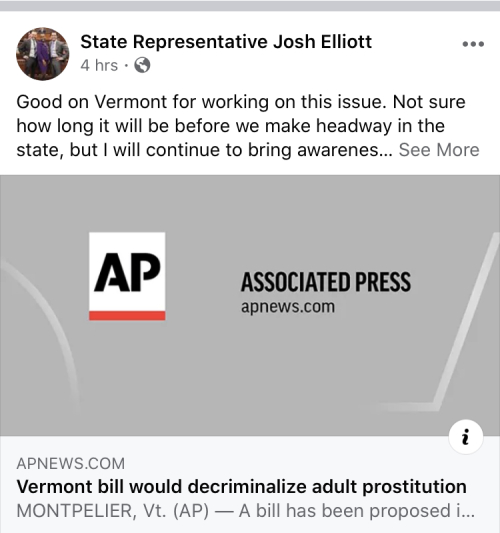 MONTPELIER, Vt. (AP) — A bill has been proposed in the Vermont Legislature to decriminalize adult prostitution.

The legislation is co-sponsored by four female legislators. Rep. Selene Colburn, a Burlington progressive, said she thinks that decriminalizing sex work will improve safety and health of prostitutes, mynbc5.com reported. “The underlying question is do we need to criminalize consensual sex between adults on any terms?,” she said. Sex trafficking, exploitation and solicitation of minors will remain a serious felony, she said.

State Representative Joshua Elliott, the architect of removing the Religious Exemption from the state of Connecticut praised the state of Vermont for efforts to decriminalize prostitution.  He also is a champion of prison inmates rights, fighting for free phone calls to family.  He wants to protect the right to turn tricks while he literally turns his back and a deaf ear on thousands of families across the state. I'm not arguing against legalizing sex workers, or the rights of those who are incarcerated. I'm pointing out the juxtaposition of his opinions. He wants to pass a law to make using the religious exemption illegal. And that's the definition of criminalization. 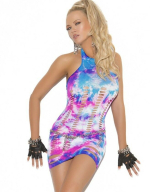 Elliott owns two local health food stores.  Thyme and Season in Hamden and The Common Bond in Shelton (minutes from my home.)

Perhaps he can start selling tie dyed, hemp micro-minidresses and 4 inch heels made from bamboo so that the sex workers can thank him by shopping there, the way so many of us USED to when we bought our supplements and natural foods at his stores? He can even change the store name to The Common Bondage!  I assume he'll soon post signs saying that unvaccinated children can not be present in his stores because of the grave threat they carry.

Our healthy kids will be criminals, forced to stay home from school.  And I ain't joshin' you.

I would hazard a guess, that everyone of those organizations would be against parents trying to protect their children from predatory pharma. They are willfully blind; pathetically ignorant and likely to become a mob of intolerance.

that we live in a time in our great country …. where this anonymous letter is the LAST RESORT of a religious community that has been DEMONIZED in the COURT OF PUBLIC OPINION ..

The individual healthcare needs of all children should be protected.

Kim, you may be called a "martyr mom", but at least you have the balls to admit that this is a epidemic caused by overvaccination.

Wants to "legalize" a source STD promulgation (kind of like Pan voting to decriminalize failing to inform a partner if one is HIV positive)? I guess this is consistent with the behind the scenes "a vaccine a day to keep health, I mean 'harm' away" (new?) mentality of pharma and various shareholders.

Benedetta, I second that motion! All those in favor of that motion signify by saying Aye.

Kim is a good speaker. I wish Kim could run and win.

It is time for the people in Connecticut to remove this man from office … surely there is SOMEONE in his district that will challenge him in a PRIMARY .. failing that … in the GENERAL ELECTION at the very next opportunity.

These people must PAY A POLITICAL PRICE for their callous indifference to the people they are elected to serve .. and it is up to the PEOPLE to do just that.

He's not turning his back on constituents by preventing VPDs. Honestly if it weren't for all the online AV misinformation you people spread this kind of legislation wouldn't be necessary.

Back in April of last year, James Lyons-Weiler wrote an article entitled:
To School Administrators: Why The Unvaccinated Should be Welcome in Your School
I particularly liked this suggestion:
“perhaps they should consider mandating that doctors be tested weekly for pertussis infection to find the hidden reservoir of asymptomatic carriers.” https://jameslyonsweiler.com/2019/04/25/to-school-administrators-why-the-unvaccinated-should-be-welcome-in-your-school/