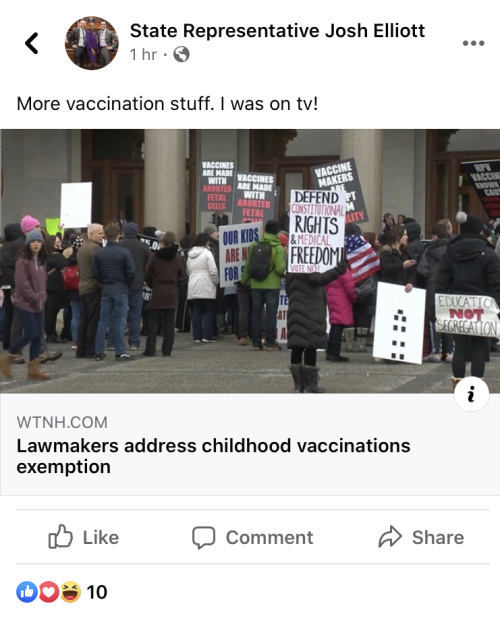 Meet Connecticut State Representative Joshua Elliott*!  the architect of removing your right to decide on your child's health in Connecticut. The man who told Robert Kennedy Jr the debate with Yale on vaccination safety and policy had been cancelled.  He devotes much of his time to legislation to help our prison population. I wish he'd devote ALL of his time to making sure inmates can make free phone calls...  Meanwhile, my daughters are unable to use the telephone thanks to their vaccine injury. (See below from the State website for a description of his work as a Rep.)  He and I share the same birthdate believe it or not. I believe he is single and does not have children.

He wrote this post on Facebook yesterday: "More vaccination stuff! I was on TV!" (Which reminded me of the old Crest toothpaste ad featuring a little kid saying, "Look, Ma! No Cavities!")

Hello. That vaccination “stuff” landed my beautiful daughters at The Kennedy Center for severe disability. They are vaccine injured. Their names are Mia and Gianna. Your language is callous. Hope the camera caught your good side.

Elliott owns 2 health food stores. The Common Bond and Thyme and Season. (Common Bondage and Thyme for a Mean Season.) Common Bond is just a few miles from my house. In a painful serving of irony, most of us have used supplements and organic, natural, gluten free foods to help our kids. I sure did. At stores just like Elliott's. So he is PROFITING off of our vaccine injured children. Age of Autism supporter and contributor Laura Hayes called both stores from her home in California yesterday!  She left us these two comments:

Josh Elliott also co-owns Thyme and Season in Hamden, CT. This is an excellent opportunity for those in CT to boycott his stores as he works to remove your rights, and encourage others you know to do the same. To call his stores to register your complaints, and to let them know they will not be receiving your shopping dollars, here are the numbers: The Common Bond: 203-513-8200 Thyme and Season: 203-407-8128 To call his office: 860-240-8585 I would also encourage people to leave reviews on Yelp, and other forms of social media, letting potential shoppers know that the co-owner of these stores is working hard to strip CT residents of their rights, freedom, and health. (Laura Hayes)

I just called all 3 numbers I posted previously. I spoke with a store manager at each of Josh Elliott's stores (both were polite and listened to my concerns/complaints/plans to encourage those in CT to boycott his stores, and one expressed alignment with and gratitude for the work we are all doing to advocate for parental rights and medical choice freedom), and I also left a voicemail for him at his legislative office. I hope others here at AoA will join me!  (Laura Hayes)

Since winning the 88th District House seat in the Connecticut General Assembly in 2016, State Representative Josh Elliott has advocated for implementing progressive policies that will help improve Connecticut’s economy and allow it to remain competitive with surrounding states.

Elliott, who grew up in Connecticut and attended high school in Hamden, graduated with a B.A. in Sociology from Ithaca College. He later went on to obtain his J.D. at Quinnipiac School of Law. As co-owner of Shelton’s The Common Bond Market and Thyme & Season in Hamden, which he also manages– two family-run natural food stores – Elliott recognizes the importance of investing in working families and businesses, both large and small.

Elliott is working to ensure that Connecticut employs quality public health standards by pushing for a requirement that all children in the public education system receive proper immunizations. Elliott is also dedicated to improving the treatment of Connecticut's incarcerated population. He is an active advocate of banning the use of solitary confinement and has independently championed a bill that would provide certain telecommunication services to incarcerated people at no cost.

Elliott deeply believes the right to vote is a fundamental feature of government and has resultantly sponsored several bills aimed at efficiently reforming Connecticut’s electoral system. Among these are a bill that would restore voting privileges of formerly incarcerated individuals on parole and a bill that would implement a ranked-choice voting system, which would allow a voter to rank candidates by their preference.

He has spearheaded efforts to legalize the use of recreational marijuana, sought to equalize property tax rates, and consistently supported establishing a more equitable tax structure.

Elliott currently serves as Assistant Majority Leader and vice chair of the Commerce Committee. He is also a member of the Finance, Revenue & Bonding Committee and Energy & Technology Committee.

We need to make non-sensationalist, honest, sad severe autism drama/documentaries, all about severely-affected autistic individuals we live with.

If our media on autism is all totally positive/total sunshiny rainbow Temple Grandin train wreck/Good Doctor garbage, why wouldn’t you think autism was just some kind of quirky gift without massive blood-curdling screams, institutions and pains?

More than 54% (possibly 90% now) of U.S. youth has a disability/chronic illness.

Presidents on both parties (and worldwide, not only USA) want toxic vaccines forced on everybody and every infant and child.

EXPLOSIVE REPORTING yesterday by NJ Patch, and elsewhere today (ZH burying the lede). Just look at the insane cast of characters and plot. Hat tip to the hedge fund manager who exposed the story. Missing is whether or not influence peddling was involved.

Calling forensic accountants and investigative reporters to dig for other cases, especially where public servants/educators defy public will (and are small business owners).

He's a degenerate corrupt official and I'm naively hoping karma catches up to him in the worst way!

While up in Hartford with my daughter, I passed josh outside and told my daughter “this is the man who wants you removed from school, tell him you want to stay in school”, which she did and he gave my 12 year old a silent callous glare and kept on walking without a word to her plea. Unconscionable.

His abuse of power along with his contradictory money grubbing profits make me sick. Making money off the very people he is removing their rights to body autonomy. He is truly a disgrace to humanity and this state. He is rude to people, even refused to say hello to a 5 year old protesting at the capitol the other day. I can’t think of a nice thing to say about this guy. I have no idea why anyone would shop at his store.

In my humble opinion … the ONLY thing that JIBES .. is MONEY.

Will be calling numbers Laura gave for Josh's stores sometime today … politely asking why Josh is so concerned with RIGHTS of prison inmates … yet … remains openly defiant, hostile and indifferent to protecting a PARENT'S UNIVERSAL HUMANITARIAN RIGHT TO INFORMED CONSENT regarding their child's health?