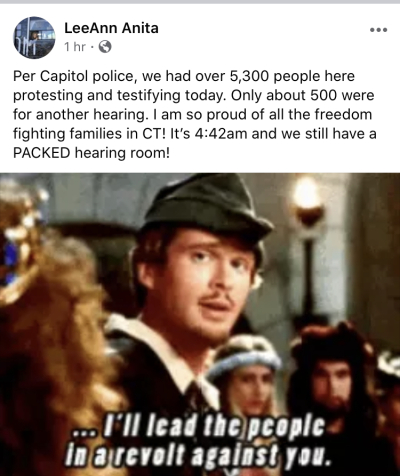 It is so frustrating listening to how uneducated, unaware, and out of touch the witnesses in favor of mandates really are. One of the more glaring was the Commissioner of Early Childhood testifying that mandates are important to protect eight week olds whom "are too young to receive ANY (her emphasis) vaccines". We've been administering the birth dose of Hepatitis B since 1991 and it's one of the major safety concerns of the vaccine risk aware. To be the person in charge of licensing childcare facilities and not even know that for nearly thirty years, children vaccinated according to the CDC don't make it to their eight week old birthday without receiving ANY vaccines is just astonishing!

This is a David vs. Goliath case, but we can do it!

Help Dr. Ken Stoller fight back against California, which is trying to ruin him for writing medical vaccine exemptions

In just a few short weeks, the Medical Board of California will be holding a hearing to examine a case against Dr. Stoller that accuses him of violating the newest laws in the Golden State governing when medical vaccine exemptions are appropriate.

At the time when Dr. Stoller wrote the 11 temporary and permanent exemptions from immunization that are now under scrutiny, Senate Bill 277 was the law of the land. Since then, however, SB 277 was replaced by SB 276 and SB 714, which carry different requirements.

Watched opening statement of Connecticut Public Health Commissioner and was not surprised to hear about an hour of the SAME OLD, SAME OLD statements that I have been hearing public health officials spew for 20 years .. including waving Dr Wakefield's name like the proverbial "bloody shirt" before the legislators to remind them once again that Wakefield's study was found to be a fraud and how extremely dangerous the measles ARE … not WERE … ARE.

Joined at the speakers table by other "experts" .. a lawyer, epidemiologist, expert on monitoring safety .. to answer questions posed by individual legislators .. a few who actually asked great questions which I am sure were the result of parents visiting their offices recently.

HOWEVER … THE PROBLEM IS HOW THESE SO-CALLED HEARINGS ARE CONDUCTED ..

When a legislator actually asks a very incisive question of a public health "expert" .. that legislator rarely follows up with challenge to the predictable "talking point" answer .. such as when panel was asked about metals .. mercury and aluminum in vaccines .. was dismissed by expert claiming thimerosal (mercury) had been removed from vaccines even though it was never found to be a contributing factor in autism .. and .. aluminum is such a small amount in vaccines it is insignificant.

Both these statements are FALSE .. and there is widespread evidence to prove them FALSE .. unfortunately the legislator is uninformed as to those two FACTS .. so the answer stands .. unchallenged.

HOW PUBLIC HEARINGS SHOULD BE HELD

They should be conducted as though it were a criminal trial .. where the PROSECUTOR (public Health official) makes and opening statement .. which is immediately followed by the DEFENSE (parents representative) challenging just about everything said in PROSECUTOR'S OPENING STATEMENT.

An independent moderator would act as a JUDGE .. asking questions of each side .. allowing the other side immediate response to answers given .. as it is done in a criminal trial through CROSS EXAMINATION OF A WITNESS.

(Think of "testimony" given by Stanley Plotkin .. the so-called FATHER OF VACCINES .. called as an "expert" witness for a father who was suing his estranged wife .. the mother of their child she refused to vaccinate over the father's strenuous objection. Plotkin .. UNDER OATH .. was on the stand for seven hours of grueling CROSS EXAMINATION by an exceptionally well-prepared LAWYER. I suspect Plotkin will never again agree to testify as an "expert" witness in a trial again.. and I wouldn't blame him for doing so.)

This is the type of public hearing regarding mandatory vaccine policies should be subjected to .. the Legislators would play the same role as JURORS in a criminal trial … allowing the PROSECUTING PUBLIC HEALTH OFFICIALS and the PARENTS DEFENSE REPRESENTATIVES to present their EVIDENCE through rigorous cross examination of each other. After the trial .. the JURORS (legislators) can make their verdict known to the presiding judge.

God I would love to see a real TRIAL of VACCINES … where BOTH sides can present their EVIDENCE and allow THAT EVIDENCE TO PREVAIL IN THE COURT OF PUBLIC OPINION.

Dr Shiva has just upload the testimony he gave against HB 5044
Maybe because he’s both a scientist and politically savvy, he laid out both the facts and their context in a way that I haven’t heard before.
He enfranchises that one size does not fit all, based on what is now understood, about the immune system and complexities which were completely unknown when the vaccines were first introduced.
The current top-down model is based on old science and we need to go back to the doctor patent model of personalised healthcare. Etc.
https://www.youtube.com/watch?v=y-naAvPKcS4