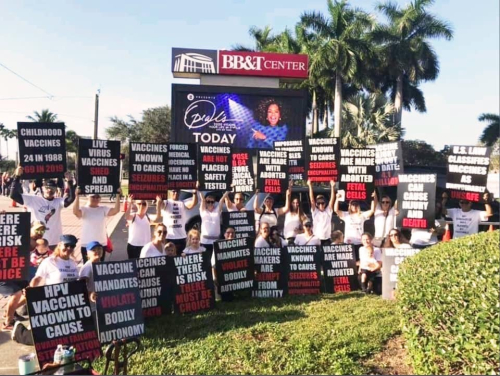 WW presents "Oprah's 2020 Vision: Your Life in Focus." Oprah Winfrey has launched a national campaign through Weight Watchers, the weight loss company she owns that was founded by Jean Nidetch,  a housewife and mother living in Queens, New York City, conceived the original Weight Watchers diet and program in the 1960s, after her dissatisfaction in following the "Prudent Diet", a diet developed in the 1950s by Dr. Norman Jolliffe, head of the board's Bureau of Nutrition.

A decade ago, Katie Wright wrote to defend Oprah after Newsweek ran a hatchet job piece about Winfrey. In 2007, Oprah had Katie Wright and others on her TV show to talk about autism. Autism.  After doctors on the program spread false info about vaccines, Katie asked Oprah during a commercial break if she could shatter the vaxx ceiling and tell her son's story. Oprah said "YES" and we need to remember this moment.  This was the first time vaccine injury and autism had been broached on national television.

Katie described her appearance with Oprah and how grateful she was, we ALL WERE, for a platform to speak freely: Oprah gave me the opportunity to speak freely, for which I am tremendously grateful, but at NO time did she endorse my opinion. Oprah carefully listened to all sides of the debate. Somehow “Newsweek” interprets episodes like these as promoting “crazy talk.” Since when is a free an open exchange of ideas so frightening? When did asking questions and telling our children’s stories become subversive? Why is talking about vaccine safety and conflicts of interest forbidden? Why does this concern the CDC and “Newsweek” more than the fact that 1 in 100 American boys have autism? Instead “Newsweek” quoted doctors and CDC officials who expounded on the real and terrible dangers of “celebrities”, “the internet”, free speech and talk shows! Now that sounds like crazy talk to me.

Last Fall, Oprah told her story of how she had pneumonia, and she recommended everyone get their vaccines. Today, I am asking Oprah to remember Katie Wright, and her Mom Suzanne as she spreads medical recommendations to her vast cadre of fans and acolytes. Oprah wields tremendous influence on millions of women, Moms, Aunts, Grandmothers, Sisters, Mothers-to-be, Mother of kids with vaccine injury.   Rather than pulling a Newsweek and chastising Oprah for her connection to Pharma and vaccine recommendations, I'm pulling a Kim Rossi and simply asking her to... remember how SHE felt when Newsweek attacked her.  How she felt when Katie poured out her heart and soul.  For so many of us, weight loss is the least of our worries. Self care is often a dream.

Weight Watchers has rebranded itself as "ww" in an effort to perhaps modernize or reduce (pun intended) any stigma associated with the brand by millenials. I saw a sign with a lavender "WW" in a circle outside a Church in my town announcing a meeting. I'd heard of the change, and so I knew what the sign meant. Otherwise? I'd have driven past unaware. To be honest, I think changing the world famous Weight Watchers brand to WW is like Coca Cola changing its brand to CC. Although it worked in part for Dunkin Donuts which uses DD, in a doughutty diety irony.

The V is for Vaccine movement showed up at the Florida event. I think these events are super helpful - participants stand, hold signs and gain awareness and media attention as the cameras are rolling. They are educating everyone who sees the signs. Human billboards.  It's a smart campaign that will inform consumers about their choices, their mandates, their health, and that's what Oprah is all about. She wants to empower her fans to live their healthiest life. So let's see if she will remember us, or not.

Levi Quackenboss has written a blog which shows that the plan to have Oprah endorse this vaccine was well under way before she had her “life altering bout with pneumonia” she never had it. It was a sham, she lied on Ellen in order to promote her new collaboration with pharma.

Poor Katie, if ever there is a woman that has had to put with telling all those around her what vaccines can and did do and then - and then get this yo yo effect of being believed, not being believed, being ignored-- I am so sorry. I know how it is. It is not that it hurts your heart, it just infuriates a person. It causes you to fume and it makes you have this long, low simmer.

Oprah’s bout with pneumonia was for her, sadly, a come-to-Pharma moment - prompting questions about her understanding of nutrition, digestion, immunity, inflammation and toxicology. Not to mention doubts about the intellect and ethical priorities of her personal and financial advisors.

A bejeweled and begowned celebrity figurehead prattling on about “your best life” might not resonate with people who buy fast food and snacks instead of fresh vegetables because grocery stores fled their neighborhoods, or obese shut-ins whose wishful “vision” is to get through an hour without feeling relentless psychological compulsions to eat, even when not hungry.

I did not know that Oprah now owns Weight Watchers. Thank you for updating me!

Ironically, there is sound evidence that vaccine-induced inflammation is behind the obesity epidemic in a study by immunologist Dr. J. Bart Classen.

I think it is time to embrace the same "demonizing" tactics of vaccine religionists .. instead of identifying NEWSWEEK for their "hatchet jobs" on anyone who dares question vaccines .. it is time we identify the JOURNALIST/REPORTER who authors those "hatchet jobs" so we can immediately recognize WHO THEY ARE WHEREVER THEIR HATCHET PIECES ARE PUBLISHED.

Yes .. NEWSWEEK is responsible to publishing those hatchet jobs .. but … we should know the identity of the "hit man/woman" who authored the "hit piece". Just blaming NEWSWEEK is like blaming the MAFIA instead of identifying the criminals themselves.