To Protect and Serve: NYPD OFficer Charged in Death of Son with Autism 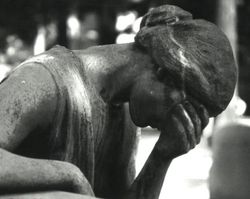 What a horror for this child. Did his autism play a role in his abuse? Imagine forcing a child to stay in an unheated garage in sub-freezing (or any) temps.  God rest the young boy's soul.  We know what happens to police officers in prison, add child murder as his crime and he won't stand much of a chance. Cry me a Hudson River.  KR

A New York City cop was charged Friday with murder after police say he forced his autistic 8-year-old to spend the night in a freezing garage after abusing him, according to reports.

His fiancée, Angelina Pollina, 42, was also charged with murder in the boy's death.

That's when Valva called police to report the boy was unconscious after falling in the driveway of their home in Center Moriches, the station reported.

Authorities said the boy had been subjected to freezing temperature overnight in the unheated garage when the outside temperatures dipped to 19 degrees, Fox 5 reported.

Thomas’ body temperature was 76 degrees before he reached the hospital and was pronounced dead, according to the station.

Investigators said the boy had never fallen in the driveway and had head and facial injuries that indicated signs of abuse.

Leah,
Thanks for that additional information. Sounds like the courts were doing their usual best to support an abusive father! Why do schools and other authorities never stand up to these people? I had a friend who was asked by her daughter's school to let her father have access, because he was harassing them at the school!

@Grace Green He actively worked to prevent the mother from seeing her own sons by lying that she was abusing them. Meanwhile the school documented the boys losing weight, being unwashed and abused in his care. Doesn’t sound like he was overwhelmed by autism.

A tragic story. However, I don't class the behaviour of this officer as corruption. I have no time for the UK police (with all respect to our friend Bob Moffit!), but I think this was a case of not being able to cope. We need to consider that there's a genetic component to autism, and many parents of autistic children may be autistic themselves, only not so bad as to be aware of it. If you're autistic and have a severely autistic child it would be very difficult to manage, especially as many high functioning autistic people get absolutely NO support of any kind from any source. THAT's corruption!

I agree Bob that there is a special place in HELL for this monster when he dies and it will be even more painful than the horrible death he inflicted on his poor defenseless son.

It is even more comforting to know there will be a SPECIAL PLACE IN HELL for this dirt-bag when he dies .. hopefully a painful death as did his precious son.

Kim-this story of the abuse and murder of a boy with autism makes me feel sick to my stomach. The penalty for such a horrific crime should be that the parents are forced to stay in the freezing garage all night. I hope they get life in prison since there is no death penalty in New York.