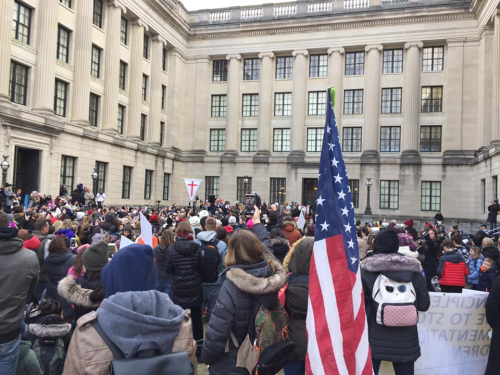 From Kathleen Hayes McCarthy on AofA last month: For over 50 years, the religious exemption in New Jersey has required a parent or guardian to write a letter explaining how vaccinating their child(ren) went against their religious beliefs and interfered with their relationship with God. This letter was then required to be privately submitted to primary and secondary schools. This system worked, proving that public health measures and religious liberty can co-exist in NJ.

This new bill S2173/A3818 completely removes the religious exemption from New Jersey law. No longer can the faithful believe in God’s power to protect them. No longer can the faithful rely on their God-given immune system to fight the everyday battles it was designed to do. No longer will a person of faith be able to choose whether to partake in substances being injected into his/her body. There is no more choice and no more consent for the faithful in New Jersey who want to attend public or private school.

And what better day to occupy the New Jersey State Capital in Trenton than Epiphany? From Children's Health Defense about this 8 day event:

Join RFK, Jr. in Trenton, NJ as He Stands with Activists for Religious Freedom!

NJ legislators have until January 13th, the end of the legislative session, to bring legislation to a vote that will remove religious exemptions in NJ. If another state falls, even more states will be targeted for the Spring. We must all take a stand for medical rights!

In December, NJ Senate President Stephen M. Sweeney vowed to bring S2173 up again for a vote. Therefore, it is more important than ever to show up and let NJ legislators know what you think! Be sure to support Senators Lagana, Rice, Ruiz, Gopal and Testa for standing resolutely against the draconian legislation in December and encourage them to stand their ground now.

If you are in a nearby state, please drive to NJ! Steadfast activists across the US should consider flying into Trenton.
RFK, Jr. will help to kickoff on January 6th:

Occupy Trenton will begin at 11:00 a.m. on Monday, January 6th with a “Jericho March” around the State House – 6 times around silently. On the 7th round, the crowd will chant to bring the walls down. The State House address is 125 W State St, Trenton, NJ 08608.

Robert F. Kennedy, Jr. will speak at noon in front of the State House during (or right after) the Jericho Walk. This will coincide with the Quorum Call.
More Key Dates: Jan. 9th and Jan. 13th

Please be on standby. Come and occupy! More details to come. Rallies are planned on the 9th and 13th but everything will depend on votes (or not) earlier in the week.

Once a large Pharmaceutical Company moved into Rockland County & donated to their causes, suddenly, without warning, religious exemptions in NYS were removed. Suddenly, without warning the NYState Supreme Court ruled -something to the effect that unvaccinated children (Healthy kids without Neurotoxic Aluminum, deadly thimerosal-Mercury, Cancer Causing Formaldehyde, Peanut oils leading to anaphylactic shock to foods & ABORTED FETAL CELL PARTS & DNA which is TUMORIGENIC) are being DENIED an Education and being REMOVED from schools. The LARGER PICTURE however is that private Religious schools are being SHUT DOWN & Removed. Hebrew Schools, AMISH Schools, and others are getting removed from the NYSTATE Terrain. Intelligent Religious families are Fleeing or preparing to flee NY. They are asking where a Safe Place with FREEDOMS are? Should they flee to Texas, Florida, Chapel Hill? Some were moving to New Jersey...and now are having their Constitutional Rights potentially Destroyed. This is the kind of thing that happened to kind religious families in Poland, Germany, Hungary, Leading to Terezin, Auschwitz and others.
Many Amish kids stay on their own farms in their own schools and don't leave their families. They don't go to the cities or mingle with others and can't possibly spread illnesses to other communities so Why then are they being shut down? It is partially because people would see how healthy they are-no Brain Encephalitis known as Autism,, No ADHD, No Lupus, no juvenile Diabetes, No Cancers in their communities. This is akin to a Modern Day Ethnic Cleansing

London England stands with Trenton.
We support you. And applaud you. And pray for your success.
Regardless the fight is Global and Infinite.

WSHU Public Radio reported that Southampton schools have joined a growing number of school districts in Long Island, New York that oppose legislation to add more mandatory school vaccinations. One bill requires children be immunized against the human papilloma virus, or HPV, a sexually transmitted disease that can cause cancer. Another bill mandates flu shots. Southampton schools wrote to state health committee members to kill the measures when they reconvene in January. The district says the requirements are an “erosion of parental rights.”

At least 16 other Suffolk County school districts have written similar letters. They say children are not at risk of HPV infection while at school, so the requirement would be inappropriate. They also question the overall effectiveness of flu vaccines. https://www.wshu.org/post/long-island-school-districts-push-back-hpv-flu-vaccine-mandates#stream/0

God bless all who gather in Trenton to support RFK in his/our gallant stand against MEDICAL TYRANNY.

Thank you for sharing.

This news clip from YouTube has an interesting perspective on Senate President Sweeney's motivation in pushing this bill through so hard.

It's also worth noting that this bill was not going to make it out of the Senate Health Committee. President Sweeney removed three Democrat members of the committee (who had sat on it for the entire legislative term) with three people who agreed to vote for it. Sweeney was one of those put on the committee.